Redstarts on the railing and in the nest

A couple of redstarts are nesting on our front terrace. They've built a big over-stuffed nest on top of the column that supports the roof overhang. The male and the female come and go all day long, bringing insects and berries to the three chicks in their brood. 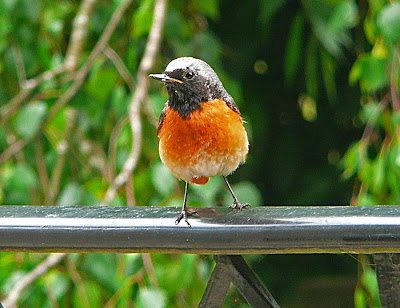 The male redstart on the railing...
These redstarts are Old World birds. The American bird called a redstart is actually in a different family entirely. And these Old World redstarts do not like it when we sit out on the terrace. With us out there, they are afraid to fly up to their nest. They and the chicks are lucky that we've been having chilly, damp weather, because we humans have been forced to stay inside most recent afternoons and evenings. (That was my way of saying that this weather we're having is for the birds!) 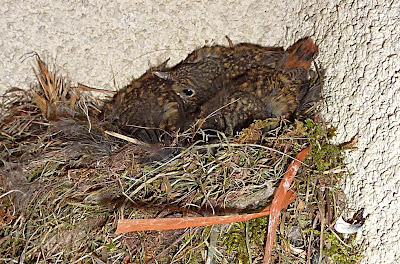 ... and three chicks in the nest
Yesterday I managed to get a photo the the male redstart as he perched on the railing around the terrace. Unfortunately, he had nothing in his beak to feed to the chicks at that particular moment. He's really handsome when he flies up bringing one of the neighbors' redcurrants for his babies. 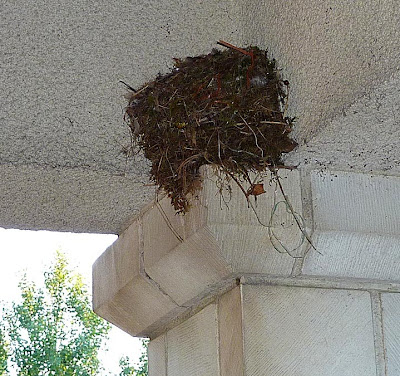 The nest is perched on top of the column
that supports the roof overhang.
Fact is, though, it's the new floor upstairs that is still getting most of our attention. That and the routine tasks of everyday life — cooking, laundry, watering plants, washing dishes, and so on. Speaking of laundry, it's been so rainy and gray lately that I've hung clothes out to dry on the line only a couple of times this year. Most days I have to hang them on the indoor clothesline. 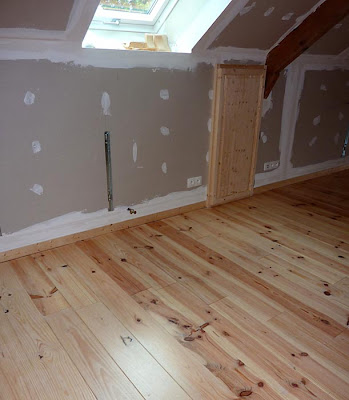 Here's a section of the floor with two —
count'em, two — coats of polyurethane on it.
It looks like we are going to meet the work deadline that we imposed on ourselves. That is, we need to be able to move our big bed and some clothes to the new room upstairs before Sunday, when friends from California arrive for a four-day visit. That's why we're doing the floor first and the walls later.

The larger of the two bedrooms downstairs will then suddenly become the new guest room. It's going to be nice.
Posted by Ken Broadhurst at 07:15