A lacy flower and a green butterfly

It looks like another damp day in Saint-Aignan, with rain showers this morning and through the day, with a possibility of thundershowers this evening. Yesterday was nice — sort of cloudy and muggy but with periods of sunshine. Walt got a lot of work done in the yard and garden.

I stripped off some more wallpaper, did some cleaning, and, mainly, cooked lunch. Callie and I had a good walk late in the day. I noticed as I walked toward the back gate that a plant given to me by an old friend of CHM's, when we visited her and her husband last summer, has now flowered. I was hoping it would. 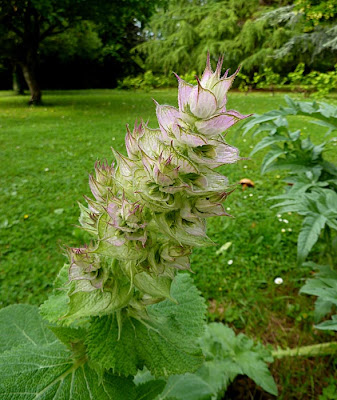 A new flower in the garden. May it live long and spread.
M. who gave it to me said it was a kind of sage. In my little bit of looking around on the internet, I haven't found anything that resembles it. I hope it will drop seeds and start spreading in the plot where I planted it, the way M. said hers had spread. She had quite big stands of these in several different spots around her garden. 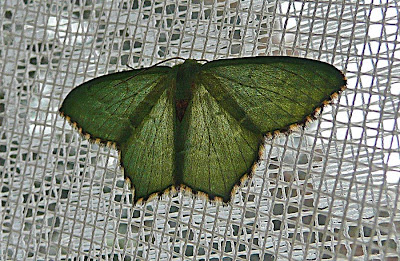 This little green moth had a wingspan of about an inch (2.5 cm).
As I was cooking lunch — another spit-roasted pintade (guinea hen) was the pièce de résistance — I noticed a little green moth hanging onto the kitchen curtains. I had the camera close by, so I got some pictures. 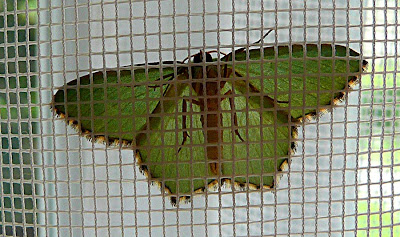 Here's a less dignified shot of the creature. Great legs,
don't you think? And those high heels!
It wasn't easy to photograph this butterfly because it was in a place that was strongly backlit by the morning sun. But the papillon cooperated, letting me tug on the curtain, to get a better angle and shot, before he finally flew out the window to meet whatever fate nature had in store for him. 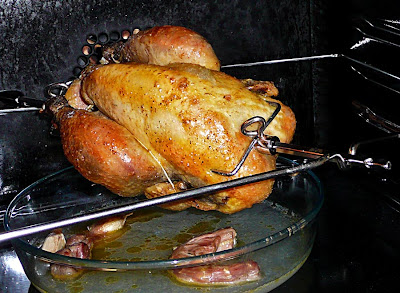 A guinea hen, or pintade, roasting on the tourne-broche in our oven
The guinea hen was very good. I gave it a butter massage before cooking it, and put some bay leaves and garlic inside to release their flavors while the bird roasted. Can you buy guinea hen in the U.S.? Somebody told me that you can find them in markets in the U.K. They are a standard item in France.
Posted by Ken Broadhurst at 05:55