It was on June 2, 2003, that we arrived in France to take possession of our new house. We had been granted long-stay visas early in May, after a two-month wait. We had sold our house in San Francisco and had to move out in March, so we'd been homeless for a while.

Friends took us in. Cheryl for several weeks, and Sue for a week, in California, before we decided to head east and wait for the visas, with bated breath and our fingers crossed that we'd get them. It was fun spending time with good friends, but we didn't want to wear out our welcome. Actually, some friends from France had made plans to visit in April and, because we had just sold our house and moved out, Cheryl took them in too. It was like a house party.

CHM in Southern California and friends Harriett and Tom in Illinois each kept us for a few days as we drove across the continent. They were all very kind to take in two nomads and their old dog. Fact is, we've all been friends going back as far as 40 years. Our temporary destination was my mother's house in North Carolina — the house I grew up in. Ma had invited us to come spend as much time with her as we needed to, waiting for the visas. 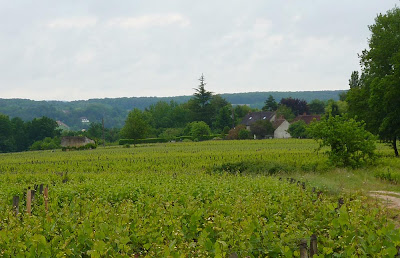 Early June 2010 in Saint-Aignan. Look how green
the Renaudière vineyard is now.
The trip across the country took about a week. It was my fifth such drive, and Walt's third. We drove through Phoenix, Flagstaff, and Gallup. We had a good stopover in Santa Fe and a great meal at the Inn of the Anastasi (on their site, look at that lunch menu!).

We spent the night in Tucumcari, New Mexico, where we decided it was time to telephone Allied International in Oakland and tell them to go ahead and put our container load of furniture, kitchen gear, and books on the boat, destination Le Havre. We were optimistic that we would be in Saint-Aignan by the predicted arrival date in early July. In fact, we were required to be here to sign for it.

We stayed in Days Inn motels Motel 6 rooms as we drove across the country, because we knew Motel 6 would welcome the dog. We drove on through Amarillo, Oklahoma City, Tulsa, Joplin, Rolla, and St. Louis — and then into Illinois, my old stomping grounds. Outside Urbana, we had the thrill not only of seeing Harriett and Tom again, but also enjoyed a loud and lightning-filled Midwestern thunderstorm.

We left Illinois and drove down through Louisville and past Lexington. In eastern Kentucky we saw funnel clouds in the sky and listened to severe weather warnings on the car radio. We made it to Knoxville without getting blown off the road, driving through blinding rain. We spent the night in Pigeon Forge, where it rained harder than I remembered it could, after 18 years in California. 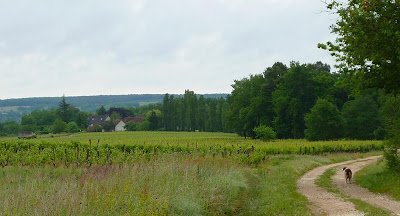 Here's Callie on her way home after a good walk.
We wanted to drive through the Great Smoky Mountains National Park, just to see it. The rain continued, however, and that drive the next day was just a green blur punctuated by swipes of the windshield wipers. On to Winston-Salem, Greensboro, Durham, and Raleigh we went, and down to the coast. We stopped and bought a couple of pounds of good Eastern N.C. barbecued pork at Wilber's restaurant in Goldsboro.

The day after we arrived at my mother's house on the N.C. coast, we got the phone call from the French consulate in San Francisco informing us that our visas had been approved. We could come in to pick them up at our convenience, but they had to be picked up in person. Actually, the consulate had kept our passports for the duration.

After some negotiating, we arranged for our passports with the visas in them to be sent to the French consulate in Atlanta. We had to drive there, and Atlanta is 500 miles from where we were, Morehead City. So we packed the dog and some clothes in Walt's 1992 Jeep Cherokee and took one last long drive. We took advantage of the trip to Atlanta to go see Savannah and Charleston on the way back.

It rained all that month on the Carolina coast. There was water standing everywhere, in yards and along roadsides. We sold the Jeep, with regrets. We managed to get plane tickets from Washington Dulles airport to Paris CDG on June 1. We had wanted to arrive in France to start this new life on June 1, our 20th anniversary together. But it wasn't to be. We arrived instead on June 2, with a load of baggage and 11-year-old Collette in her kennel. 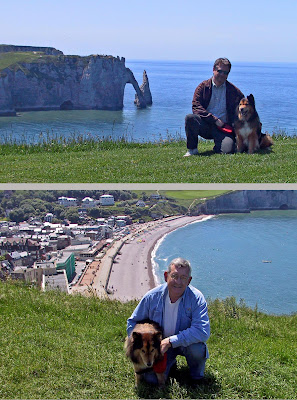 We went to Etretat on the English Channel
for lunch on June 5, 2003, when we were
staying with friends in Normandy.
Because we didn't have any furniture yet, we planned to spend some time with friends in Rouen before heading south to Saint-Aignan. But we were too antsy. Less than a week after touching down, we packed up again and drove to the house we had bought and now live in. We basically camped here for more than a month, before the container got here. 2003 was the year of the Great Heat Wave — la canicule. It started out as a real adventure, and it continues.
Posted by Ken Broadhurst at 07:16