Yesterday was another anniversary for Walt and me. It was on June 12, 2003 — a Thursday night, if I remember correctly — that we decided to spend our first night in our "new" house in France.

We had rented a gîte rural across the river in the village of Thésée for our first week in the Saint-Aignan area. Our 35-year-old "new" house was badly in need of a thorough cleaning before we moved in. It had been standing empty for at least two years at that point, and there were a lot of spiderwebs, dead insects, and dust bunnies all around. On one of our first shopping trips, we bought ourselves a heavy-duty vacuum cleaner (a "shop vac") and some brooms, mops, and cleaning products. 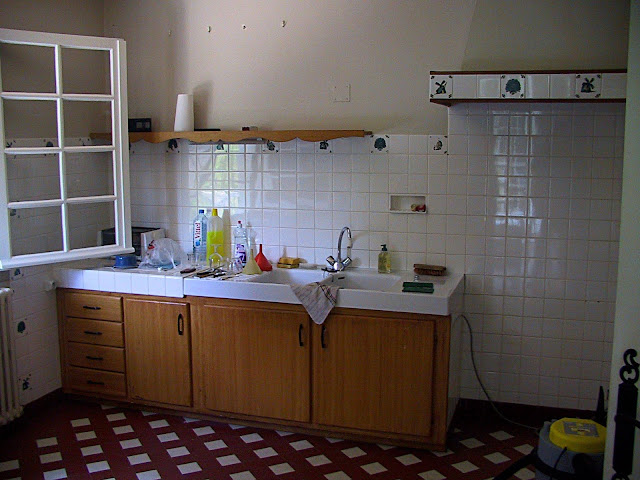 We were happy when we realized those funky tiles around
the kitchen walls were actually just decals
that we could scrape right off.

By Thursday of that first week, though, we were too antsy to stay in the rented house in Thésée even one more night. We had no furniture and no appliances in our own house (though the fridge, stove, microwave, washer/dryer, and so on were on order), but we wanted to start living here. So we did. 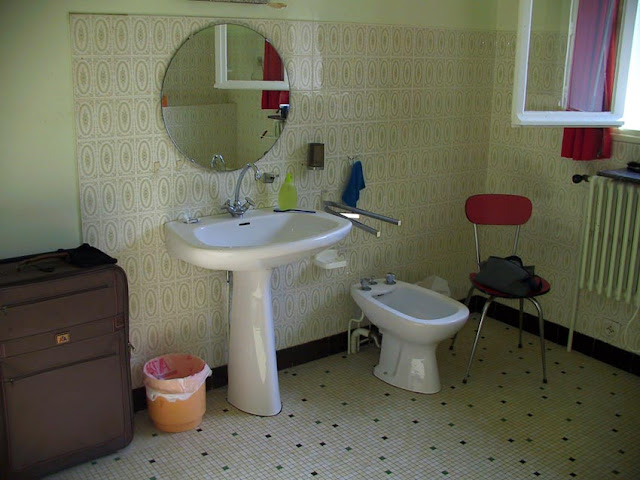 The bathroom came with a sink and a bidet,
not to mention red curtains.

We went and told the gîte owner that we were cutting our stay short. We wanted to give the woman some money to cover the cost of cleaning the rented house. She protested. I insisted. We told her we had been cleaning our own house across the river for nearly a week, and we couldn't face cleaning another one. She finally accepted 25 euros from us, and we thanked her. 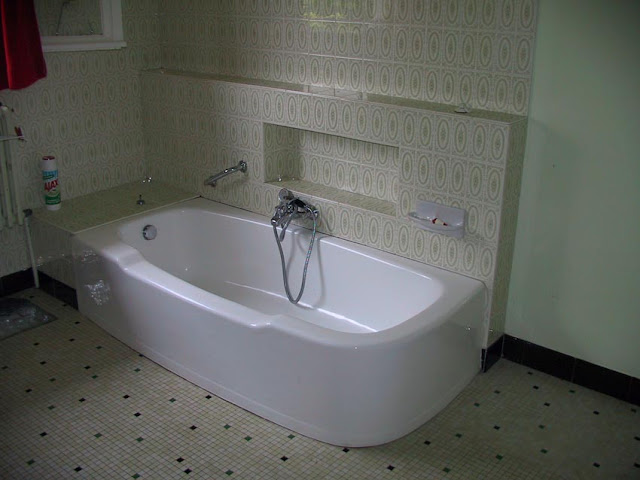 The bathtub cleaned up nicely.

Most of the heavy cleaning at our house was done by that Thursday. We went to the store and bought ourselves a couple of air mattresses to sleep on. We ended up sleeping on them for more than a month, in fact, while we waited for our shipment of furniture and other belongings to get here from the U.S. 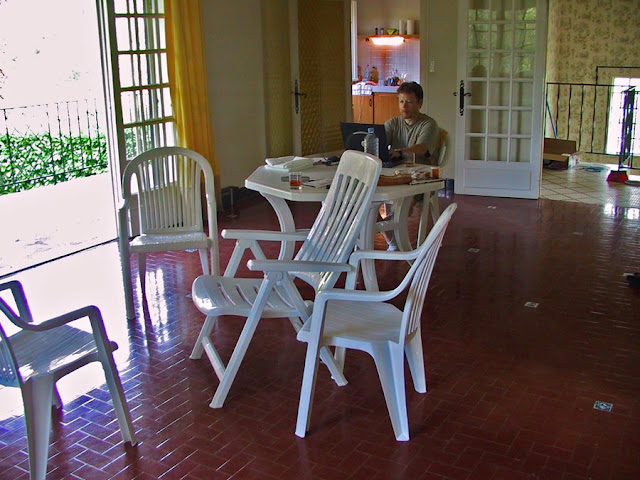 Walt working on the laptop at our 2003 dining room set

We also bought a vinyl table-and-chairs set to use as a dining room table for a while. We figured we'd always be able to use that set outside when we got proper furniture moved into the house. That was about the extent of our temporary furnishings. We did have electricity, hot water, and a shower in the house, so we just moved in. It was comfortable camping. 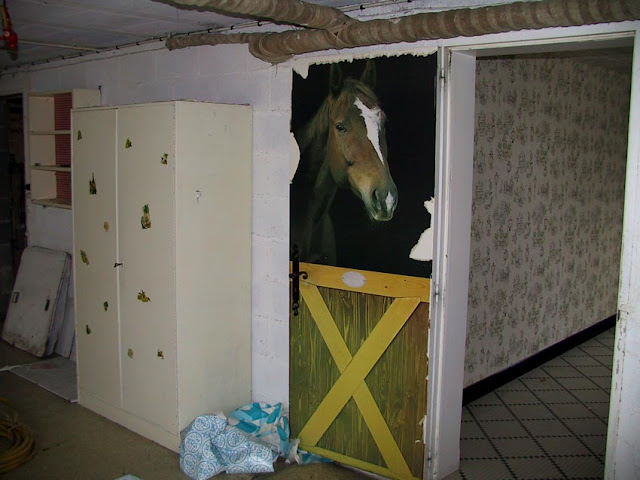 The utility room door came complete with a poster of Mr. Ed.
The horse, of course. Unfortunately, we weren't able to salvage it.

The yard was waist-high in weeds. We went out and bought a weed-eater and a lawn mower, and Walt got to work. I vacuumed. I mopped floors and wiped down walls. I scrubbed sinks and tubs. The front terrace was a mess of sopping wet astro-turf that was starting to mildew pretty badly. We stripped all that off and threw it over the railing down onto the driveway. 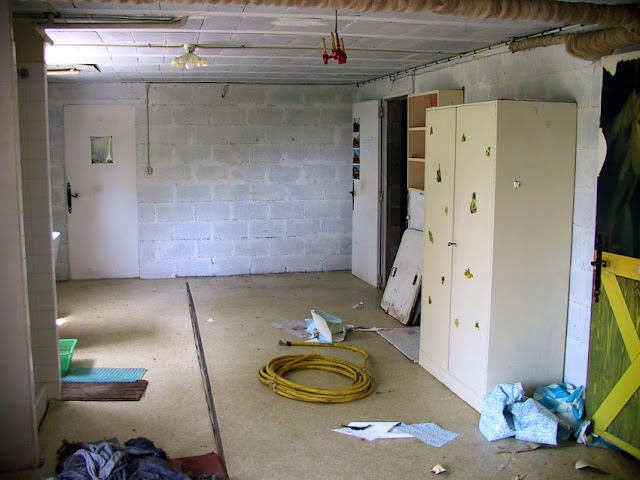 Cleaning up the utility room

The garage and garden shed were both full of debris of all kinds — old flower pots, rusting hardware, broken down chairs, boards, bricks, concrete blocks, pitiful old shelving units, cardboard boxes. We dragged it all out and started hauling it off to the recycling center, la déchetterie, by the carload. 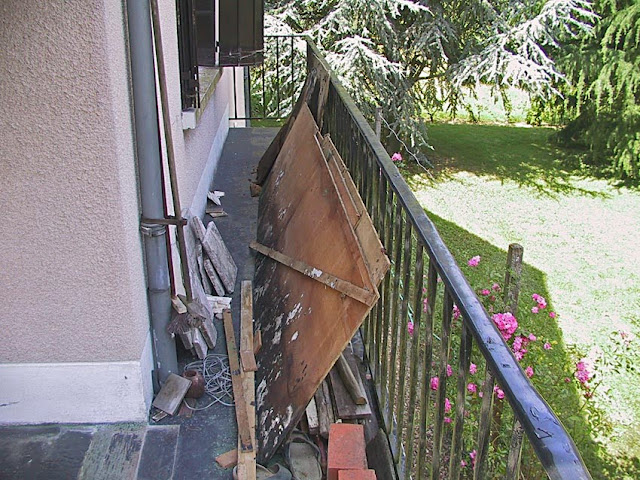 And getting the junk off the front deck

In a few days, the appliances were delivered. We could keep food in the fridge, cook it on the stove, zap things in the microwave, and wash clothes. We had all the modern conveniences. Then it became a step up from camping. Our furniture arrived about a month later, so finally we had a real bed to sleep in. 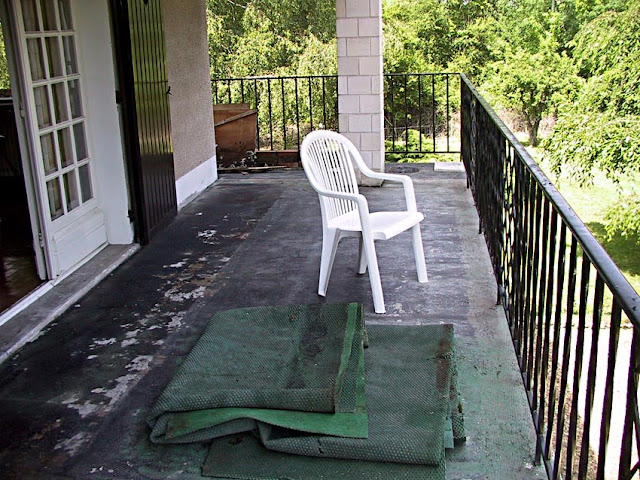 The deck with the astro-turf removed was not a pretty sight.

It was still part of Walt and Ken's Great Adventure that started in December 2002, when we first saw the old house we've been living in for seven years now. All the pictures in this post are from June 2003.
Posted by Ken Broadhurst at 07:33