Yesterday we drove the 10 miles or so over to a village near Valençay to meet some people who contacted us through our blogs and invited us for lunch. This happens several times a year, and we invariably have a good time meeting people who are interested in France and the Loire Valley, good food and drink, and meeting others like themselves.

L. and J. are a couple who live in Arizona and have traveled a lot in France and the rest of Europe over the years. They are originally from New York City. Over the years, they've rented apartments in Paris, stayed in rental houses in Brittany and eaten tons of fresh oysters, and visited a lot of the châteaux here in our region. This is the second time they have rented the gîte near Valençay, because they enjoyed it so much the first time. They are staying here for a month with their 11-year-old twin daughters. 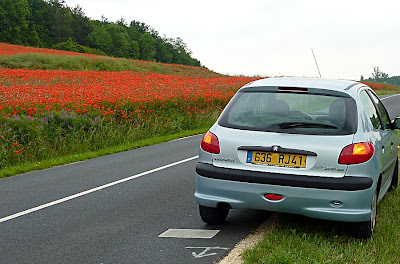 Driving over to Valençay yesterday, we pulled off the road
to admire and photograph a huge field of red poppies.
L. made a really nice lunch — lasagna according to Mario Batali's recipe, a salad of fresh vegetables, and some sweet local strawberries plus an apricot tart for dessert. Callie had a lot of fun playing with L. and J.'s daughters. We met the British owners of the rental house, who live in a separate house on the property.

Actually, at about 7:30, the owners brought over a supper of salmon and avocado amuse-bouche, a lacquered duck, and a delicious rice stir-fry. We ended up spending not only the afternoon, but the whole evening. We didn't get back to Saint-Aignan until nearly 11 p.m. We spent all that time sitting out in the garden, and we were lucky because it didn't rain at all and it was pleasantly warm out. 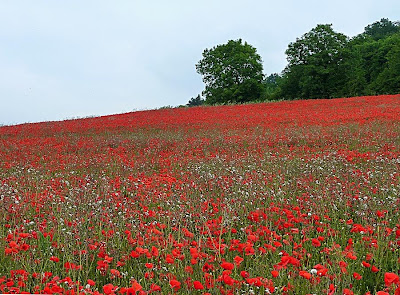 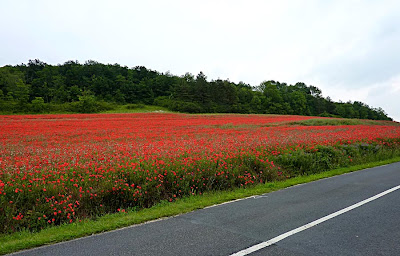 This is one of the largest fields of poppies I've ever seen.
It's about 5 miles east of Saint-Aignan, near Lye.
Last weekend, we had visitors who found us through the blog too. These were a couple I had worked with long ago — 1973, to be exact — when we were all graduate students in the French Department at the University of Illinois in Urbana. They are spending a month in Paris with their 22-year-old son, and they drove down to Saint-Aignan for the weekend to see us.

I lost touch with S. and D. back in the '70s when they moved away from Urbana and I took off for a few years in France as an English teacher. They now live in Illinois again, and he is the chairman of the foreign languages department at a large state university there. D. had a whole career as a nurse after leaving the teaching profession years ago. 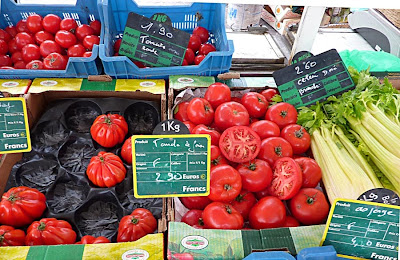 To continue the red theme, look at these tomatoes on display
in the market at Valençay. They were so appetizing
that we had to buy a couple of them.
We invited S. and D. over for an apéritif under our « barnum » — the new big-top lawn tent — out in the back yard. Then I went out to dinner with them at the restaurant in Saint-Aignan called Chez Constant. Walt begged off because he was still recovering from the nasty cold he had last week, and was still coughing quite a bit.

He probably was right to stay home instead of going to the restaurant with us. S., D., and I were talking about old times, back before I met Walt in 1981. We had a lot of mutual friends to catch each other up on, and a lot of stories to tell each other about how our lives turned out the way they did, all that we did along the way, and how we got to where we are now. It was a lot of fun.

If I didn't do this blog, we probably would never have found each other again.
Posted by Ken Broadhurst at 07:59