I give you another shot of the deeply red tomatoes on display at the market in Valençay a couple of days ago, because this may be as close as we get to a tomato crop this summer. Unless the weather improves, that is. 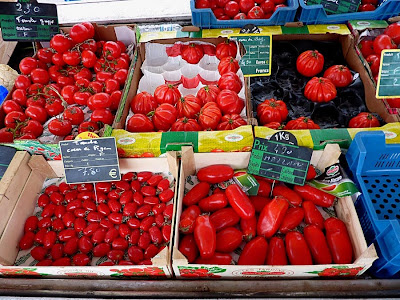 Early-season tomatoes at the market in Valençay
We are having another damp, drizzly day. Now I can't really complain — it would be unseemly — considering the horrible storms and flooding people down in the southern part of France have lived through this week. There was considerable damage, and 20 or more people died. The system that caused those storms moved north, but by the time it got to us it produced just gray skies, chilly breezes, and drizzle.

The Loire Valley doesn't often get tropical downpours and cloudbursts. The climate here is temperate. But you know what temperate means: it means it is very seldom really hot, and only nice and warm all too infrequently, and for very short periods. Okay, there are exceptions to that rule, but so far the 2010 season doesn't seem to be one. 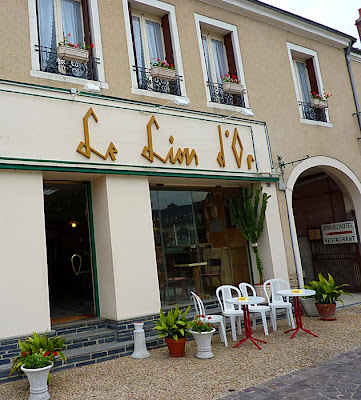 What with our damp, gray weather, it's not surprising that
nobody was sitting at the outdoor tables on the sidewalk
in front of the Lion d'Or in Valençay.
Yesterday afternoon was positively gloomy. This morning too. I guess it's good weather for finishing a new floor. 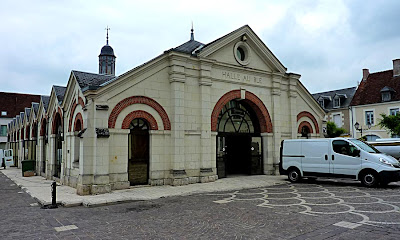 The market hall in Valençay looked a little triste,
but that's because it was closing time.
Bricomarché didn't fail to entertain yesterday morning. When we got there, we could find only a single tin of the vitrificateur, the polyurethane varnish, that we wanted. We went to seek assistance at the customer service desk, and were told that the product we needed was a promotion, and that the store probably wouldn't have more than a can or two of it. We needed much more than that, of course.

They said we could buy the regular, not-on-sale product if we liked. That was 2.5 liters for 47 euros. Not quite twice the price. What a deal! We were thinking: "Bait and Switch."

We ended up finding three 3-liter tins, at about 30 euros each. Again, that wouldn't do it. Walt kept searching, and just as we were about to give up he spotted some 6-liter cans of the varnish up on a very high shelf in the paint section of the store. The 6-liter cans had not been included in the stores sale flyer.

Yes, it was the exact same varnish. And what was the price? It turned out to be 55 euros for the 6 liters. That was even less expensive than the 3-liter tins that were an advertised special. We were in luck. The store employees, Johnny and Florence by name, seemed to be unaware of its existence.

You always have to be resourceful — débrouillard — in French retail stores. Often the large economy size of a given product ends up costing more per liter or kilo than the regular size. You're better off buying two smaller cans, jars, or packages than one large one. And often the sale items are in one section of the store, while in the regular aisles the exact same product is still for sale at the higher price. How many times has that happened to me? « Mais monsieur, il faut regarder dans le rayon des promotions si vous voulez le prix annoncé dans la publicité ! » Why would they have the same product at different prices in different sections of the store. Va comprendre... 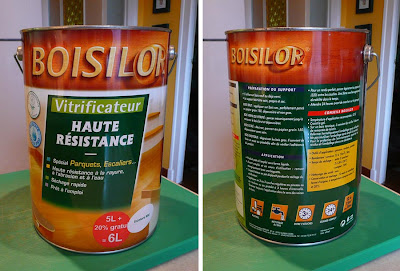 Part of the haul. The four tins cost about 225 euros.
And how many 6-liter tins did Bricomarché have on the shelf? Four! « Ouaou ! », as they say — that means and sounds like Wow! We were in business. We bought all four. Four 6-liter tins is the equivalent of 6 U.S. gallons of product. We can put down three or even four coats of it at that rate, according to the instructions on the tins.

That's a good thing, because we painted a spare floorboard with some yesterday afternoon to see what it looked like. It did not appear yellow to my eye. And the wood fairly quickly and completely soaked up that first coat. I guess that's a good thing too. At least it won't peel off.
Posted by Ken Broadhurst at 07:35