About birds, including a recipe

When I first thought about this post as I walked the dog this morning, I thought it would be a recipe and I would tack on a couple of gratuitous factoids about local birds. Then I realized the recipe was for a chicken dish. The whole post would be about birds.

First, the redstart chicks have now all left the nest. It must have happened yesterday. We were occupied with other pursuits, including cooking, receiving guests, and eating. After lunch, Walt got up on the ladder and looked in the nest. The redstart parents are now empty-nesters.

And yesterday morning, I think it was, Walt was looking out the back window when he saw a now-familiar bird. "Look, isn't that a hoopoe?" I did look, and sure enough, it was a damn hoopoe. It's the first and only one I've seen this summer. Walt had seen it out by the pond a week or so earlier. Hoopoes are spectacular.

Here's a hoopoe story from two years ago. You might have read it back then. 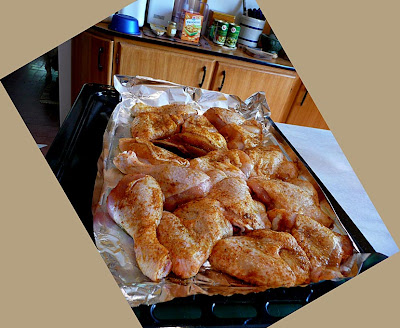 Rub the chicken pieces with a Moroccan spice blend...
Meanwhile, if you saw Walt's post today, you know about the guests we had over yesterday afternoon, and what we ate and drank. I was really pleased with how the tajine of chicken with prunes came out, and with the way I ended up cooking it. 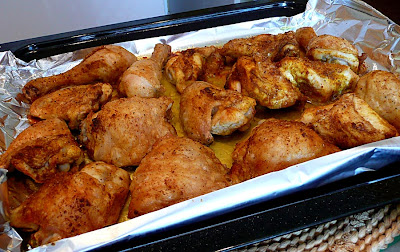 ...and cook them in the oven until nice and golden.
The recipes I looked at said to brown the chicken pieces in a pan on the stove. One recipe said to cook the chicken completely, then make the sauce with prunes, onions, honey, and spices. After letting that cook for a while, you were to put the chicken back in the pan and ladle the sauce over it. 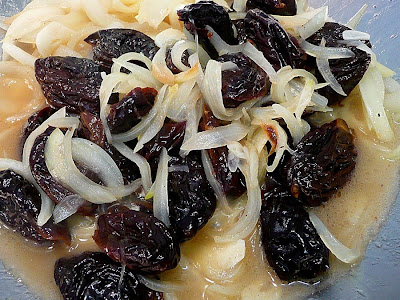 Cook prunes with onions, garlic, honey and spices
to make a sauce for the spicy chicken.
That made me think that maybe cooking the chicken first in the oven would be easier and make less mess — less mess because I lined a pan with aluminum foil so clean up was minimal. I don't like frying chicken in a pan because the skin always sticks and sometimes comes entirely off the pieces. The oven worked better. Then I made the onion-prune sauce and poured it over the cooked chicken. 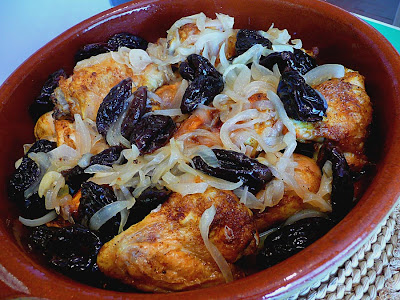 Tajine of chicken with prunes and onions

Put the chicken pieces on an oiled baking sheet and baste them with some oil. Cook them in a hot oven for 30 to 45 minutes — as the chicken starts to brown, gradually turn down the heat so they will continue cooking but not burn. Start at 450ºF (230ºC) and gradually reduce the heat to 400º and then 350º as you go. 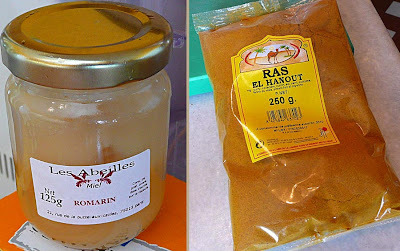 Friends who visited earlier in June brought us jars of honey
from Paris. I used rosemary-flower honey in the tajine.
And next to it is the bag of ras-el-hanout spices I used.

While the chicken is cooking, slice the onions and garlic and start them cooking in some oil in a pan over medium heat. Add the pitted prunes, the cinnamon, nutmeg, and honey to the pan, with a few tablespoons of water. Cover the pan and turn the heat down to low. Simmer the onions and prunes for about 15 minutes.

Put the chicken pieces and their cooking juices — that's where the spices are — in a baking pan large enough to hold them all in one layer. Pour the onion-prune sauce over them. Salt and pepper to taste, stirring the chicken around so it is all covered in the cooking juices and the sauce. Add a little more water. Set the pan in a 350ºF (180ºC) oven for about 30 minutes. Cover it if it starts to brown too much on the top.

When it's done, top it with toasted almonds and toasted sesame seeds. Serve and enjoy. 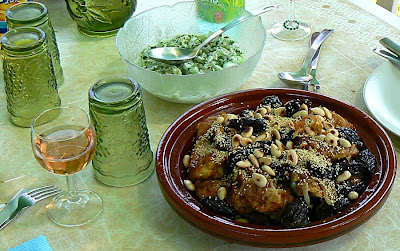 Here's the tajine on the table. This is a cropped version of
a picture Walt took yesterday and posted on his blog this morning.
You can make this tajine ahead and reheat it at the last minute, or you can just keep it in a warming oven for an hour or two before serving it. That's what I did yesterday. Just before taking it to the table, turn up the heat for a few minutes to that it browns on top. Serve it with steamed rice, boiled potatoes, or, better yet, steamed couscous grain.
Posted by Ken Broadhurst at 08:38