About Bricomarché, scrubbing, and ditches

More about the Bricomarché policy on promotional deals: When we found out that the store had only two tins of the floor-finishing product they advertised at a special price, and didn't have any more in stock, Walt and I both expressed our dismay. That's the word I'll use. We needed at least four, and maybe six, tins of it.

Johnny, the employee who has advised us and sold us things many times over the past seven years — I'm sure he recognizes the two crazy Americans when they come in (though he probably assumes we're British) — reacted this way: « Ne vous affolez pas ! Ça se passe de plus en plus souvent comme ça maintenant. » — "No need to get upset. That's the way things work these days." Or something to that effect. We are all victims, I guess, of corporate policies. 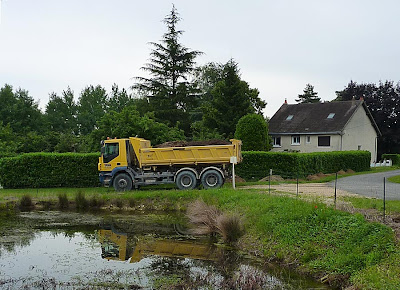 A big yellow dump truck parked out behind our house
yesterday. See below.
Obviously, the store's policy is to advertise a special and order only one or two of the sale items. It happens all the time. I've never been offered a rain check, as you would be offered or would ask for in an equivalent situation in the U.S. When I go to Intermarché to buy ducks or legs of lamb or whatever, because they have the item advertised in their store flyer, more often than not I'm told they've sold out. Sometimes they'll tell me, for example, that they might get some more in on, say, Friday — come back then. Ha! I've fallen for that one several times.

Once, Intermarché advertised large, whole, raw frozen prawns at a very good price. When I went over there, I couldn't find and prawns in the freezer cabinets. I asked an employee. Oh no, we didn't order any of those, she said. They just advertised them, I thought to myself. They were satisfied with that.

At Bricomarché, Florence, the employee Johnny referred us to for information about availability of the polyurethane product, said the store in fact had only those two three-liter tins of it. But she said she would call the store in Bléré for us to see if there was more available there. I said, fine, we can always drive the 15 miles over to Bléré to get it if there is. On no, Florence said. We'll send Johnny to pick it up and bring it here for you. That was a nice offer, I think. 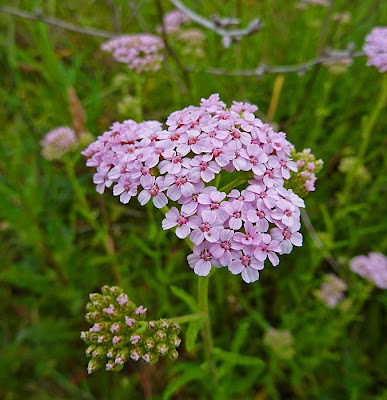 Flowers for Florence
Meanwhile, Walt spotted the larger buckets of varnish that were hidden away on a high shelf and that had not been advertised. We verified that they were in fact the same product, and we looked at the price. I would not have been surprised to see a price of 70 or 75 euros on the six-liter tins, since the price on the 3-liter ones was 30 euros. As I've said, often the "large economy size" of a product is more than twice the price of the regular size. They just do that to keep you on your toes, I guess.

Anyway, there you have it. Cultural differences, I guess. As they say in France, it's « chacun pour soi. » You are on your own. And caveat emptor to you too. 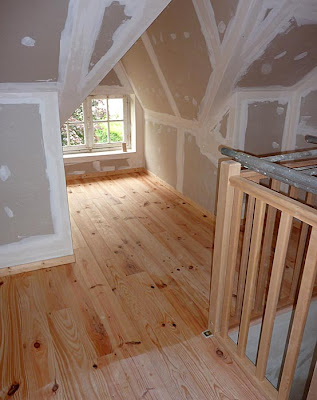 The floorboards before (foreground bit) and
after scrubbing. We are using a colorless varnish
so this is what the floor is going to look like, I think.
Yesterday, I spent a few hours down on my hands and knees, scrubbing the pine floorboards upstairs. They were covered in plaster dust and little hardened drops of plaster or spackling. The only way to get all that off was to wipe the floor carefully with a wet cloth. Sweeping and vacuuming weren't effective. Scrubbing was, though. I'm happy with the result. 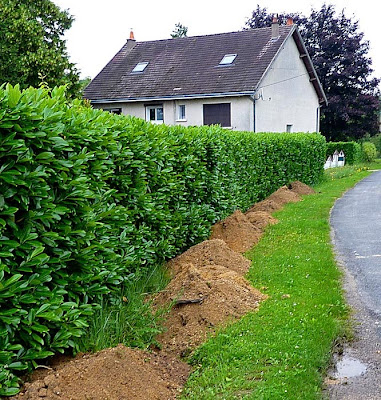 Filling in the ditch — hurray!
During the day, a big yellow truck came and dumped a load of soil into the ditch on the south side of our back yard, along the road. We had been promised that the ditch would be filled in someday. Now it has, at least partially. And just when we were talking about going out there to knock down and smooth out the piles of soil, a man showed up on a motorized excavating machine and did it all for us. Nice. The mayor arranged all this. 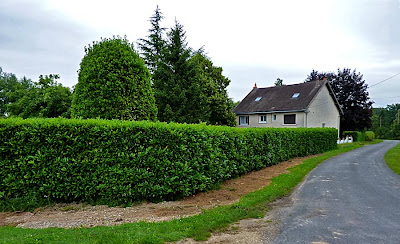 The dirt is all tamped down — we don't have to do it.
Having the ditch filled in will make it much easier to mow the grass along the road. It will all look much neater once grass grows over it. And it will be a lot easier to set up a ladder out there when the time comes (in September) to trim the hedge again. By the way, there was never ever any water in that ditch anyway.
Posted by Ken Broadhurst at 07:14