I used to buy stuffed grapevine leaves — in French, feuilles de vigne farcies — in tins when I lived in the U.S. I'm sure they must be available that way here in France, but I've never seen any in our Saint-Aignan supermarkets. For some reason, I got the idea of making some late last summer. They are a Greek concoction called Dolmas.

When I read about making dolmas, all the recipes said you must use the tender young leaves that appear on the grapevines in the spring. That meant I had to wait the better part of a year before I could try my hand at it. I know you can buy grape leaves in jars and cans, probably in Paris and maybe in Tours or Blois, but not around here. 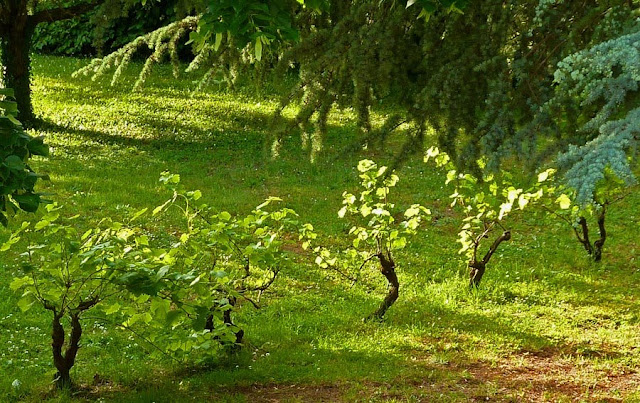 Untreated grapevines with tender green leaves,
in our back garden

So I had to use fresh grape leaves. Lucky for us, we have a dozen or so grapevines in our back yard. They have hardly ever produced enough grapes to be of any great interest — maybe they need to be fertilized or otherwise sprayed and treated, and we don't do anything to improve them. They are pretty to look at, and they have very nice leaves. We know, at least, that those leaves haven't been sprayed with any noxious chemicals. They're perfect for home-made dolmas. 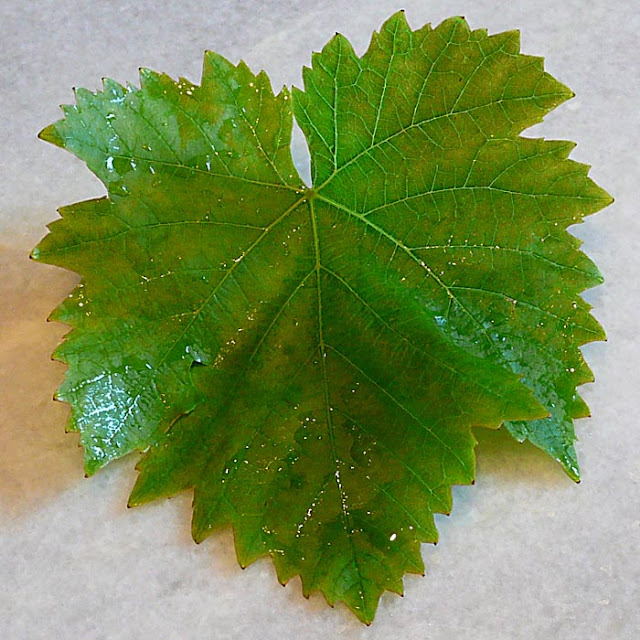 After washing and de-stemming the grape leaves, you need to blanch them. That means to cook them in simmering salted water for at least 3 minutes to soften them and make them pliable (literally, foldable). As soon as they are blanched, put them in a cold water bath to stop the cooking. 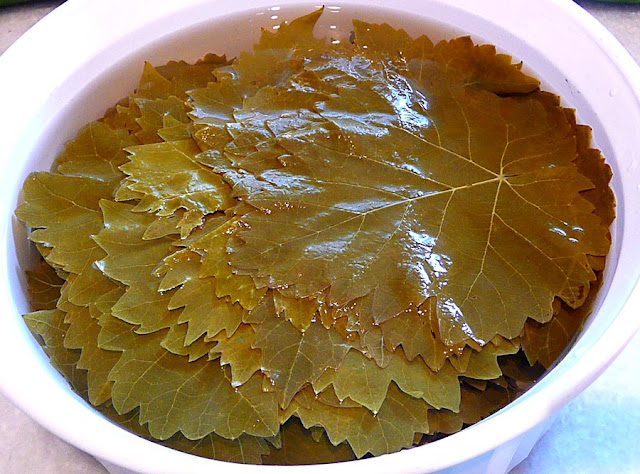 I picked 50 leaves off our vines, trying to get ones that were tender and green but also large enough to be wrapped around a ball of stuffing. I blanched them in batches of 10, cooled them in cold water, and then spread each leaf out and made a neat pile of them in a deep round dish. Pour salted water over them — use the liquid they blanched in after it has cooled. This way you can store them for a day or two in the refrigerator. 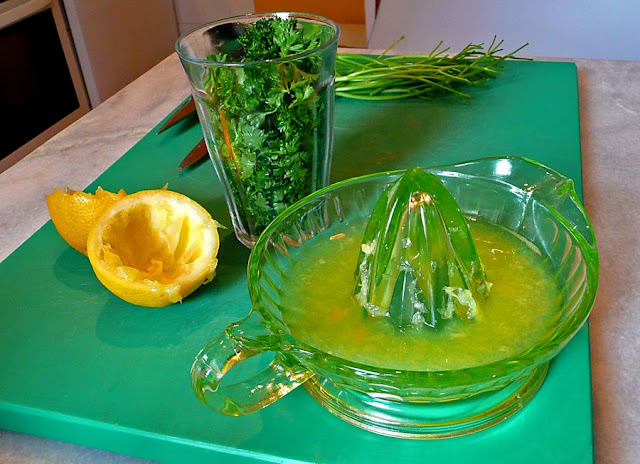 Lots of parsley and lemon juice for the rice stuffing

Then make the stuffing. There are many recipes, of course, and some include meat. The three essential stuffing ingredients, however, are cooked rice, herbs, olive oil, and lemon juice. Onions and toasted pine nuts are common ingredients, and the herbs used often are parsley and either dill or mint. 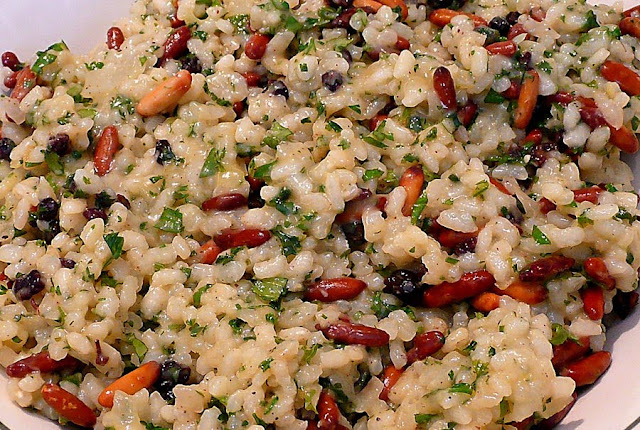 Here's the meatless recipe I came up with after looking at a few in both English and French on the Internet:

Cook the onion in olive oil until it softens. Add the rice and cook it in the olive oil for a couple of minutes. Add the broth and cook on low heat until the liquid is absorbed, stirring occasionally. The rice doesn't need to be completely cooked at this point, because it will cook later for quite a while inside the grape leaves.

Toast the pine nuts and add them to the warm rice along with with the currants (raisins), herbs, and spices. Mix well and and add the juice of a lemon and a little white wine — save the lemon rind to cook with the stuffed leaves. Season the rice mixture with salt and pepper, stir well, and let cool.

To stuff the leaves, take them one by one out of the brine, spread it on the work surface, and put a teaspoon or two of the rice stuffing just where the stem was. Fold up the bottom of the leaf and then the sides. Roll the leaf up into a little log shape, filled with the stuffing. 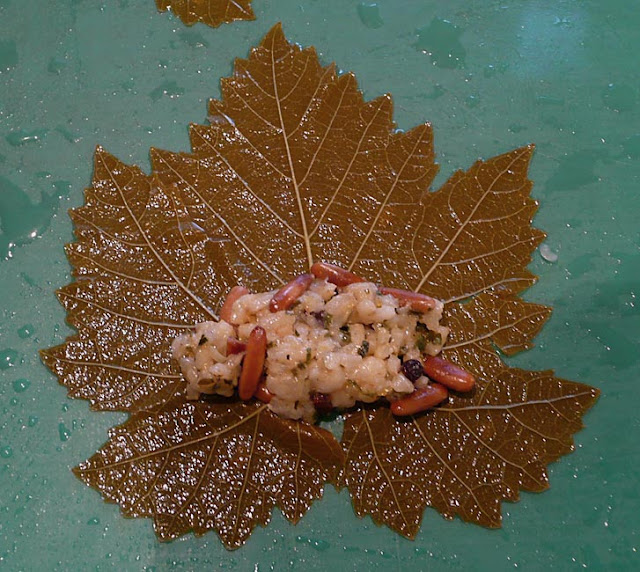 Place a bit of stuffing on the leaf and roll it up.

Pack the stuffed leaves in a single or double layer in a pan so that they won't come apart when they cook. Pour on a cup or two of hot water — not quite enough to cover the leaves completely. Drizzle in a couple of tablespoons of olive oil, and scatter the cut-up lemon rind on top. Cover the leaves with a an oven-proof plate to hold them in place. 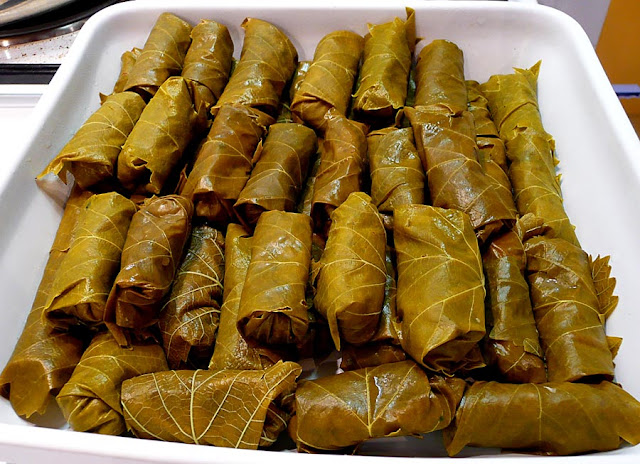 Stuffed leaves ready to be transferred to a pan and cooked

Put the pan on top of the stove and bring it to the simmer. Be careful not to let it scorch on the bottom. Then put it in a 300ºF/160ºC oven and let it cook gently for 45 minutes to an hour. Lower the heat it if it boils too hard. Most of the liquid will evaporate, leaving a lemony olive oil sauce in the bottom of the pan. 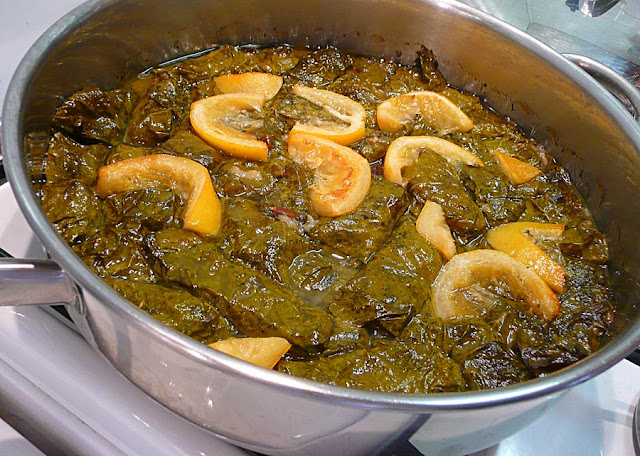 Let the stuffed leaves cool in the pan before removing them to a serving platter. Then put them in the refrigerator for at least an hour before you serve them. They are good with a glass of wine cold white, rosé, or red, as you prefer. They will keep for a few days in the refrigerator.

The grapevine leaves, parsley, and pine nuts give the dolmas a resiny taste that is brightened up by the lemon juice and enriched by olive oil. Mint and raisins lend just a little sweetness. 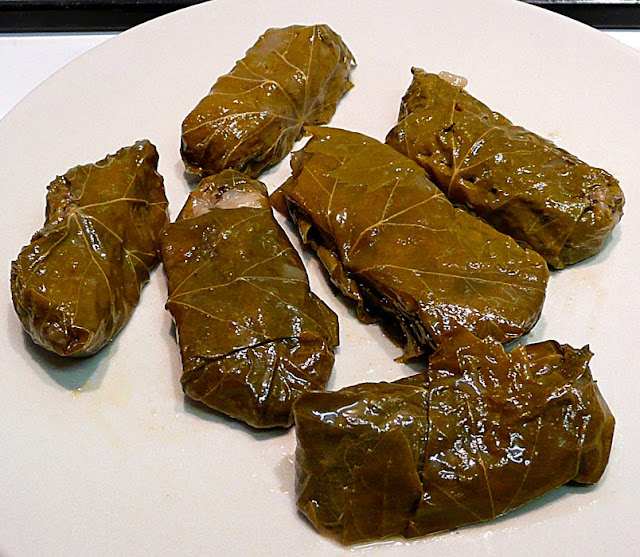 Serve the dolmas cold or at room temperature.

My memories of Greek foods like Dolmas come from both France and the U.S. One year in Paris, I was in classes at the Sorbonne with a Greek woman from Salonica. At Christmastime she went home to spend the holidays with her family, and when she came back to Paris is January she brought us a batch of stuffed cabbage leaves that she called Dolmades, which her mother had made. They were rich and lemony in taste, stuffed with ground meat. It was a great dinner.

In the 1970s I also lived near Chicago for a few years and had friends whose parents or grandparents had immigrated to the U.S. from Greece earlier in the century. We used to enjoy going to the restaurants in Chicago's Greektown neighborhood, eating Dolmas and many other Greek dishes.
Posted by Ken Broadhurst at 06:57