Getting our house back

In a way, we are starting to get our house back after three months of disruption and disturbance. In another way, I am starting to realize how we truly are getting an entirely new, much more spacious house.

The downstairs entry hall — the only finished room we have at ground level, the rest being unfinished garage and utility room space — had served as my computer room since 2003. My messy desk was down there for all to see, along with a television set and, starting in 2004, a single daybed that we had bought for overflow house guests, since we had only one guest room. 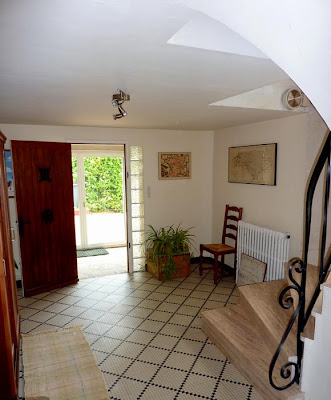 The entry hall all cleaned up
Now that entry hall will be exactly that, and not a home office with a messy desk in it. The room gets a lot of daylight through two south-facing glass block windows on the stairway. It will be a perfect place for houseplants. And now we have the new armoire, which makes a perfect coat closet for us and for guests. 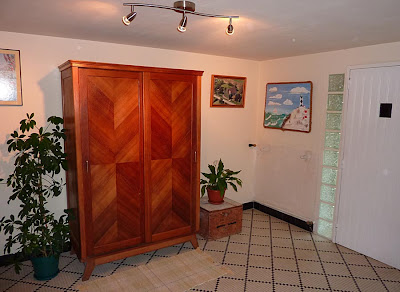 The radiator (see picture above) will hang on brackets
under the lighthouse painting.
For the time being, I still have an old armchair and footstool in the room. There's a big TV under the stairs, where you can't see it, and I'll be able to sit down there to read or watch movies until the upstairs room is painted, later this summer. Then we'll move the TV, chair, and ottoman up there. 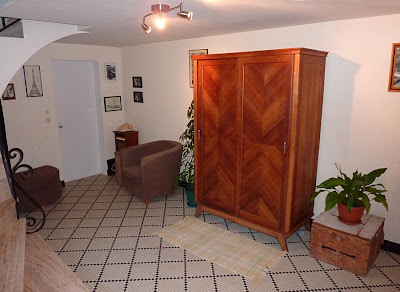 The new wardrobe and my temporary TV room
We have company coming from California on Sunday. Yesterday, while Walt was putting the third coat of polyurethane on the pine floor upstairs, I decided to do some cleaning on the ground level.

First I scrubbed the tile floor to get off all the black scuff marks and dried plaster residue left by the work crew. They had stored boards and drywall down there during the travaux, and had mixed up buckets of plaster there to take upstairs for "mudding" the taped drywall panels. The entry hall was a mess, to say the least. 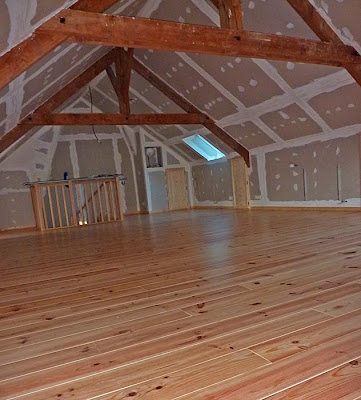 One more shot of "the dance floor"
I told Walt we might as well re-hang some of the pictures we had taken down during the work phase, to make the place a little more inviting. We'll have to take them down again when we start re-painting the walls down there, but that's not much work. Then we can re-position and hang them up again. The big armoire will be easy to cover with a tarp when painting time comes.

Up in the attic, before the work began, we found three wooden boxes that the previous owner — a man named Jean Kientzy — had left there. He was the man who had the house built 45 years ago, and he had at one point in his career lived and worked in Kourou, French Guyana, where the French government launches its satellites into space. La Guyane is on the northern coast of South America. 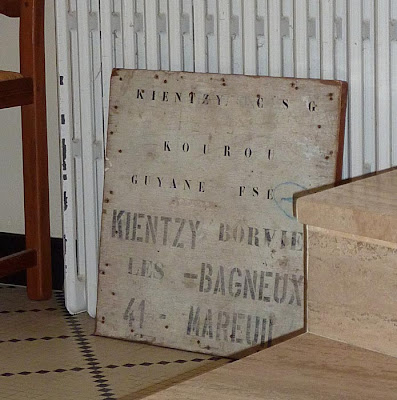 The lid0ff one of Monsieur Kientzy's shipping crates
Evidently, when Monsieur Kientzy moved back to France after his tour of duty in Guyana, he shipped back these three wooden crates holding some of his belongings. Shipping origins and destinations are stenciled on their lids, as you can see in the picture above. I brushed, vacuumed, and washed out the crates yesterday, because I think they'll make good plant stands, either in the entry hall or on the sunporch. Or maybe even upstairs. 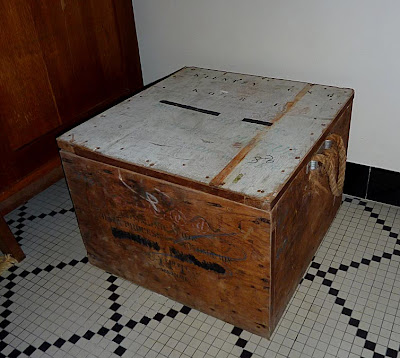 Here's another one of the wooden crates.
Who knows, I might decide to varnish them, since I think we ended up buying a lot more varnish than we will need for doing the floor and stairs. Varnishing has become an inside joke now. Everytime I mention of piece of furniture that we'll have to move, Walt says: "Hey, maybe you can varnish that too!"
Posted by Ken Broadhurst at 07:46