Seven years ago, when Walt and I came to live in France, we first drove up to Rouen, in Normandy, to spend a few days with friends there. They lived in the center of town near the old marketplace and the cathedral, and they had a studio apartment they let us stay in. The pictures in this post are ones I took on June 3, 2003.

I lived in Rouen for a year in the early 1970s. I was 24 years old and I had a job as an English teacher in the illustrious Lycée Corneille — formerly called Le Collège Royal — there. It was a part-time job, and my purpose for being there was to improve my French. I made good friends and my French was pretty much fluent by the time I went back the the States. 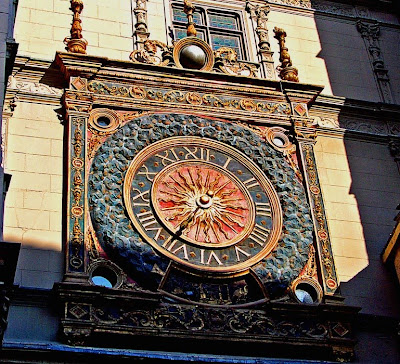 One of the symbols of the city of Rouen is this old clock
in a tower over one of the main streets.
In 2003, the great Canicule — the weird European heatwave — had already started, but we didn't know it yet. The Normandy climate is essentially damp and cool, but by early June seven years ago the weather was already hot and strangely sunny. 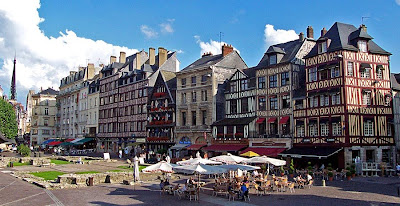 Buildings around Rouen's Vieux Marché — the old market.
The one in the middle all decked out in red flowers is La Couronne,
the restaurant where Julia Child had her first meal in France.
The reason we were in Rouen was that our friends who had the studio apartment were going to lend us some sheets, towels, and other essentials that we could take with us to Saint-Aignan. Those things would tide us over until our container arrived in July, with the furniture and other belongings we had shipped from California. I thought we might buy a car there too, but we ended up driving the rental car down to the Loire Valley. 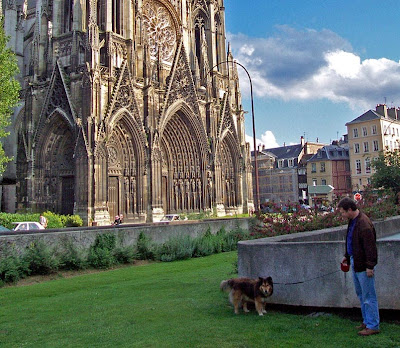 Walt and 11-year-old Collette in front of
the Eglise Saint-Ouen in Rouen
Rouen is a magnificent old city with one of the most impressive cathedrals in France, two other fine churches, and the old tower where Joan of Arc was supposedly held prisoner before she was burned at the stake in the city's old marketplace in 1431. Historically, Rouen was considered the capital of Normandy. Victor Hugo called it « la ville aux cent clochers » — the city of 100 church towers. The novelist Stendhal called Rouen “the Athens of the Gothic era” for its great architectural treasures. 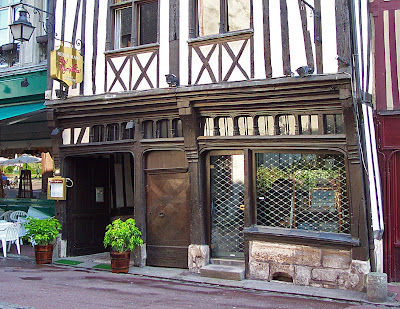 The city of Rouen is an open-air, living architecture museum.
Rouen is also a big port city. Ocean-going ships come up the Seine from Le Havre to unload their cargo. The historic center is on the right bank of the Seine. On the left bank is a newer urban area, and the whole metropolitan area has a population of half a million. There's a new tramway that runs underground through the old part of the city. Rouen less than 90 minutes from Paris by train. 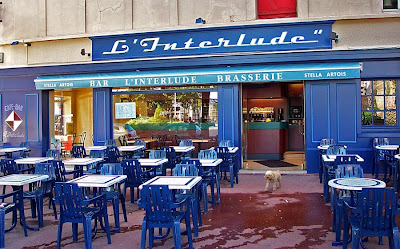 But Rouen in not just a museum — there are many
nice cafés and restaurants to enjoy too.
I haven't spent nearly as much time in Rouen over the past seven years, since moving to Saint-Aignan, as I did back in the 1990s. But I'll go back there this summer, if everything works out. CHM and I are planning a trip for the end of July. Walt and I went to Rouen to visit friends in August 2006 — I posted about it here. A few years ago I did a series of four topics about Rouen and the time I spent there in the early 1970s. It starts here, and there's a link at the bottom of each topic to take you to the next one.
Posted by Ken Broadhurst at 09:02