I guess it's like driving on the right or on the left. Or pronouncing post-vocalic Rs.

When I read Simon's post, I didn't realize he was talking about switches that are outside the door of the room where the light fixture is located. With those, of course, you can't be sure whether the light is on or off without opening the door, unless you are sure which position on the switch is "on" and which is "off" — or can you?

In, America, I'm not sure we ever have light switches outside the rooms where the fixture they control is located. There must be some, but I can't remember any off hand, thinking back to all the American apartments and houses I've ever lived in (at least 15!).

In France, the switches are put in that way all the time. Often, the light switch for a bathroom light is located next to the door outside the bathroom. It can be very confusing. And what if you are in the bathroom (often actually a toilet) and somebody comes by and turns the light off? There you are, in the dark. (That doesn't happen often, in my experience.)

It's easier to turn the light on when the switch is in the lighted space outside the WC. When it's inside, you have to search around for it with your hand, in the pitch dark.

Anyway, it's very common in France to have a special switch with a "warning light" — un voyant lumineux — built in, just for such switches. We have one for our downstairs cellier — that's a walk-in pantry — because the light switch is located just outside the cellier door, and the cellier is windowless. A light switch in French is called « un interrupteur », by the way.

And you don't have to go into the pantry — it's dark in there when the light's off — and fumble around for the light switch. You turn on the light using the outside switch before you open the door. And when you exit, you know if you've remembered to turn the light off because of the "idiot light" built into the switch. 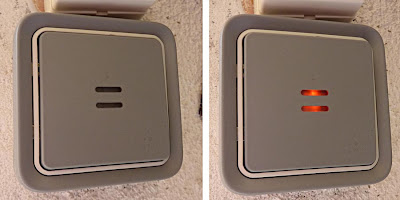 The interrupteur for the light outside over the back door,
off and on.
We have the same kind of "idiot light" switch for an outside light over our back door. The switch is inside. When the light is on outside, the idiot light is on for you to see from inside, on the switch. That one is handy during daylight hours, because during the day you can't tell from inside whether the outdoor light is switched on — even though the door has windows in it. At night, you can tell whether it's on or off — unless you've closed the heavy metal shutter across the doorway.

In apartment buildings in Paris and other big French cities, the lights in stairwells and hallways are often put on a timer so that they turn themselves off a few minutes after they are turned on. It's a way to avoid wasting electricity — the lights don't stay on all the time they way they do in the U.S. The switches for those timed hall lights in France, called « minuteries », often have a voyant lumineux built into them, but it serves a slightly different purpose.

In hallways and on stairs, the "idiot light" stays on when the overhead lights are off. That way, you can find them easily when you are searching about in the dark for a way to light up the space. I don't think I've ever seen minuteries in America either. 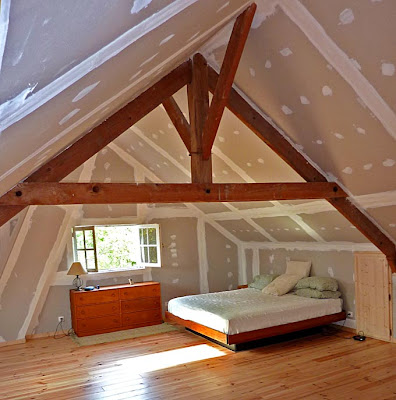 Since yesterday there's some furniture
in the new upstairs space.
By the way, yesterday we moved the bed and dresser upstairs. We won't take any more furniture up there until we get the walls painted. That is, unless we decide to leave them as they are and call it a decorating choice. Just kidding.
Posted by Ken Broadhurst at 07:32