Do you know about single-acting and double-acting baking powder? I admit I was only vaguely aware of the two types of what in France is called levure chimique — chemical leavening — as opposed to natural leavening, or yeast. What I don't know is whether the two different types of baking powder are on the market in France.

The active ingredients in single-acting baking powder are an alkaline, usually baking soda — bicarbonate of soda or, in French, bicarbonate alimentaire — and an acid, usually cream of tartar — potassium bitartrate or, in French, crème de tartre or acide tartrique. The baking soda and cream of tartar react with each other when they come in contact with a liquid, and the reaction releases gas bubbles that make a pastry dough or cake batter rise.

Double-acting baking powder contains a second acid that only reacts with the baking soda only at elevated temperatures. In other words, it acts twice, making the batter start rising as soon as a cold liquid is added, and then making it rise again when the liquid in the batter gets hot. The second acid is usually an aluminum salt — sodium aluminum sulfate, for example, or soldium aluminum phosphate.

In his book Classical Southern Cooking, Damon Lee Fowler says that single-acting baking powder is no longer made commercially. You can make your own, if you have both sodium bicarbonate and cream of tartar. The latter is a by-product of wine making, by the way. Ironically, cream of tartar is not widely available in France. 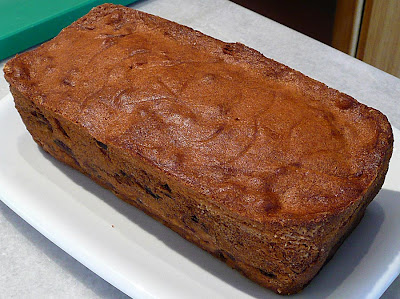 A first look at the cherry cake, or cake aux cerises
The proportions for single-acting baking powder are two parts sodium bicarbonate to three parts cream of tartar. To make a small quantity, for example, mix 2 tsp. bicarbonate with 3 tsp. cream of tartar. If you want to store the mixture for a while, add to it 3 tsp. of wheat flour, rice flour, corn starch, or potato starch. The inert flour or starch will absorb moisture and prevent the alkaline and acid ingredients from reacting with each other before you intend them to.

Yesterday, I made that cherry cake I talked about, using the cherries I pitted at 6:00 a.m. (Yes, I've always been an early bird. Un lève-tôt, they call it in French. I'm matinal by nature — a morning person.) To make the cake, I made my own baking powder, according to Damon Fowler's instructions. Luckily, I have brought little containers of cream of tartar back from the U.S. on past occasions. On the other hand, finding sodium bicarbonate in French supermarkets is not a problem.

The cherry cake seemed to rise differently. Instead of forming a round top and splitting open, the way most loaf cakes do when they cook, this one rose evenly and had a basically flat top. I don't know if that's the work of the single-acting baking powder. Now I'm trying to pay attention when I'm eating a slice of the cake to determine if it tastes any different from the ones I've always made using commercial double-acting baking powder.
Posted by Ken Broadhurst at 08:25