That attic and those taxes

Walt has a really bad cold. It rained hard for several hours yesterday afternoon. And I spent a good part of the day doing my taxes, which are due in France and the U.S. next week.
Ouf !

On the positive side, it turns out that the income tax I have to pay in France is much lower than I thought it would be. I started getting a retirement pension in 2009, and it was the first year since 2002 that I've had any significant income.

On the other hand, it turns out that the income tax I have to pay in the U.S. is much higher than I thought it would be. I always thought taxes were higher in France. I guess it's not true any more, with the Bush tax cuts that benefited the wealthy. People of more modest means have to pay more. 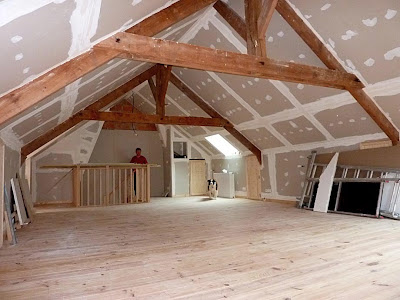 Walt and Callie up in the attic
The two guys doing the final work in the attic worked here on Monday and Thursday. We expect them back this morning. I don't know what they were doing on Tuesday and Wednesday, and I didn't ask.

The fact is, the work is very nearly done. They are focusing on the last few fit-and-finish touches, like putting up moldings and baseboards to hide ugly joints and seams between the floor and the staircase and the walls. I hope Walt can get over this cold so that we can start varnishing the floor and stair next week. 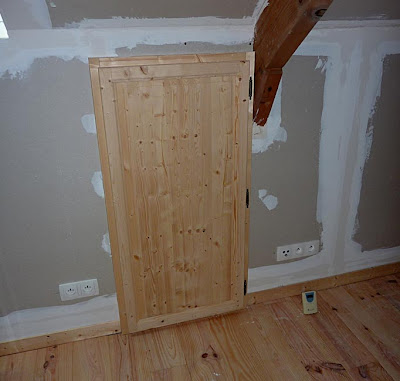 We've decided to paint rather than varnish the closet doors —
there are seven of them around the room.
I'm impressed with the two "kids" doing the work. They are doing better than I thought they would since they no longer have Coco's supervision and advice. Coco is still in the hospital, by the way. He's been there for 10 days now. 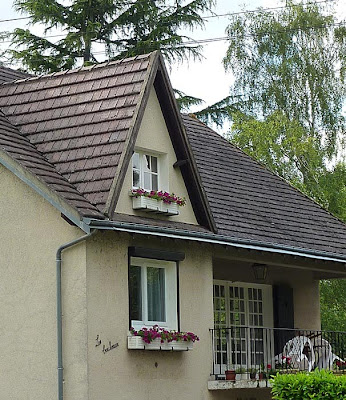 Now that we have stairs and access to the upper floor,
we can have flowers in the upper window boxes
as well as the ones out the kitchen window.
The workers are also open to suggestions and criticism, and they respond immediately if we point out something we think could be done better or differently. They clean up every evening before they go home. They smile and chat a little. They've gotten over being nervous when we get involved in the job. 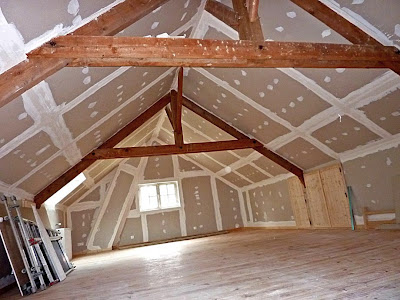 Looking toward the north window — that's
the scaffold on the left, all folded up.
Jacques the Big Boss offered us use of his scaffold — a platform on wheels — for the painting we have to do. That will make the job much easier when it comes to painting up to the top of the vaulted ceiling next month. 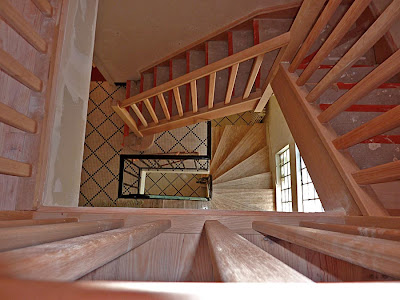 Looking down into the stairwell from the attic top floor
Bulletin!
At 10:30 this morning, the guys finished their job, packed up all their tools and debris, swept up some dust and grit, and said Au revoir ! They are through. Now it's up to us to start cleaning, sanding, varnishing, and painting.
Posted by Ken Broadhurst at 07:37