Walt posted about our new "big top" but I will too. This is a picture I took from an upstairs window this morning. It's the west side of the house, so the sun isn't on the tent yet. We sat out there in the shade yesterday afternoon and listened to the tennis matches. It's going to be very nice to sit out there this summer. 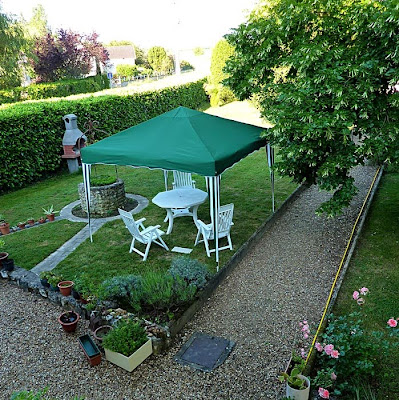 Also yesterday, I made a cherry sauce — a kind of chutney, I guess — using dark sweet cherries that some friends gave us. They picked them on a tree in their yard. I basically used the same recipe Susan posted here a few days ago, but I used different cherries so the sauce is dark red rather than bright red.

The sauce has ginger, vinegar, hot red pepper, rosé wine, sugar, and salt and pepper in it. I also added some kirschwasser to the sauce to enhance its cherry-ness. We basted chicken wings with it and cooked them on the grill outdoors. Then we used some of the cherry concoction as a dipping sauce at the table. 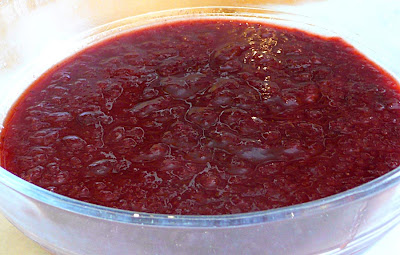 Cherry sauce, a kind of chutney
The picture below shows a house under construction down the hill, along the road that runs into Saint-Aignan. I think it's interesting because it shows approximately how our house was built 40 years ago. The bottom story is build with concrete blocks — cinder blocks. The top story is built with "brick blocks" — hollow terra cotta blocks, called briques cuites creuses, I think. 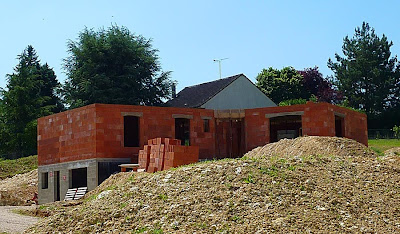 A new house going up on the road to Saint-Aignan
These hollow bricks form a wall with air spaces as insulation. One side of each brick is the exterior wall, which ends up coated with a kind of stucco. The other side is the interior wall, and it is coated with plaster. That's how it is with our house.
Posted by Ken Broadhurst at 09:07