Yesterday we picked the first eggplants (aubergines) from the 2009 vegetable garden. There were four of them and they had gotten pretty big — just right, actually. I was impatient to make a dish we've really enjoyed in past summers: a casserole of eggplant, tomato and cheese au gratin.

This gratin is easy to make but takes a little time because the eggplant needs to be pre-cooked. That is, you cut the eggplants into rounds, or slice them the long way, about ¼" thick. Then you oil a baking sheet — if you have a silicon baking pad, that's a good thing to use, as parchment paper would be, to keep the slices from sticking — and arrange the eggplant pieces in a single layer, making sure both sides of the slices are oiled. Olive oil, or a mixture of olive and other vegetable oil, is the best. Sprinkle on a little salt. 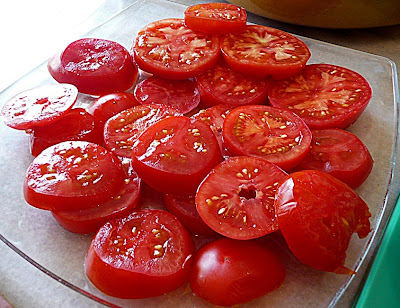 Tomatoes from the garden
Put the baking sheet in a hot oven (200ºC/400ºF) for about 15 minutes or until the eggplant slices are sizzling and start to take on a golden color. Repeat the operation as many times as necessary to cook all the eggplant slices you're using, or arrange them on several pans and do them all at once. In our little oven, we needed to cook three batches.

Meanwhile, slice 6 or 8 tomatoes fairly thickly. There are no precise quantities here. As the eggplant slices come out of the oven, layer them in a baking dish and then put a layer of tomatoes slices over them. Sprinkle on salt and pepper, and then put a layer of grated or crumbled cheese on top of the tomatoes. Add herbs — basil is really good, but parsley works too — and sprinkle on some paprika if you want. A combination of smoked and hot paprika is delicious. 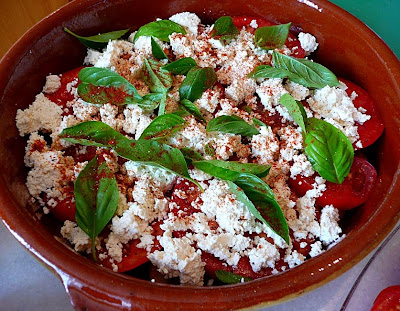 What cheese to use? Ricotta and mozzarella come to mind first, but other cheeses, including Swiss Gruyère or French Comté or Cantal would work. Jack cheese would be good. Yesterday, we used "ricotta" in the middle of the layers and mozzarella on top. 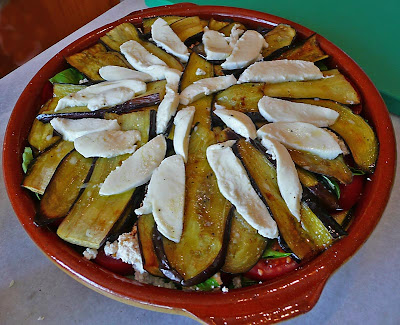 Sliced mozzarella cheese on top
About that "ricotta" — I made my own, using a recipe contributed by David Lebovitz and published by Elise on Simply Recipes. Let me say that it was easy to make and turned out to be really delicious. It uses 2 quarts of whole milk and a cup of whole-milk yogurt with a little vinegar and salt. You can add ½ cup of cream if you want — and I did want to, using French crème fraîche épaisse. The recipe worked perfectly. If it needed any modification, it would be the addition of just a little more salt. 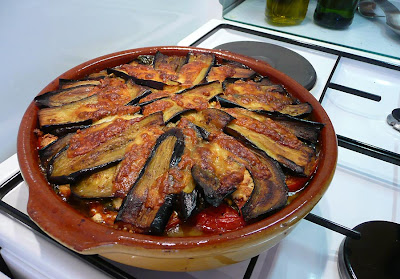 Here's the finished casserole
However, the resulting cheese is not really ricotta. It's cottage cheese, and I'm really glad to know how to make cottage cheese because, as far as I know, we can't buy it here in Saint-Aignan. We can often find ricotta, but not always. The cottage cheese worked very well with the eggplant and tomatoes, but it has a consistency that is different from the smoothness of ricotta. 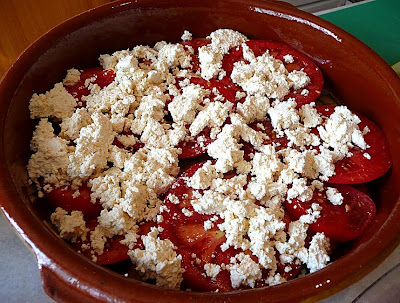 Ricotta is a soft, bland, white milk product made from whey, that watery part of the milk which separates from the curd when this is made into cheese... A passable substitute is the more long-lived whole-milk ricotta readily available at most [U.S.] supermarkets.

Perhaps because they are so similar in appearance, some authors suggest that ricotta and cottage cheese are interchangeable. This is a most grievous error. Cottage cheese is completely un-Italian in taste, and should not be contemplated as a replacement for ricotta.

Marcella Hazan states her opinion without beating around the bush, ça c'est clair. At any rate, I thought the cottage cheese was very good, but it was certainly different from ricotta. Judging from what M.H. says, I've never tasted authentic ricotta, which is by-product of cheese-making and is made only in certain parts of Italy.

By the way, good additions to this kind of dish, replacing part of the eggplant or just added in, would be some roasted red bell peppers, or some slices of zucchini treated the same way as the eggplant slices. Here's another idea using the same ingredients from 2004, and one from 2008.
Posted by Ken Broadhurst at 09:05