I spent a good part of the day processing tomatoes, as you might imagine. I used about two thirds of the harvest, I'd estimate, and I ended up with about 4 liters/quarts of puree. It cooked pretty much all day: a couple of hours in the morning before we sieved the seeds and skins out, and then at least a couple of hours in the afternoon, on low heat, so that it would reduce and thicken.

Once I sterilized some jars, put in the hot tomato puree, and put the tops on them, the lids all popped down, meaning they were sealed. I planned to put the jars in a boiling-water bath to process them for long-term storage, but I neglected to ascertain in advance that the jars would actually fit in one of our big stock pots. 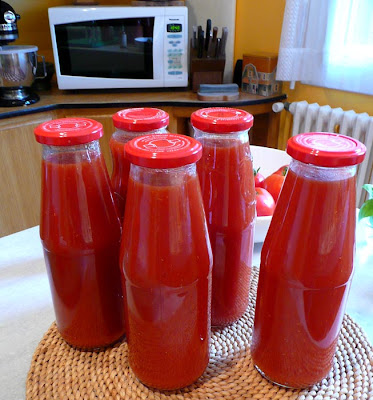 They wouldn't. They are too tall. So this morning we ended up opening the jars, pouring the purée into plastic containers, and putting it all in the freezer after all. The jars will go to the recycling center. They're of no use to us.

Yesterday afternoon Walt started sawing wood for this coming winter's fires in the wood stove. He has to cut each meter-long log into three pieces, because that's what will fit in the stove. Below is a picture of our wood storage area, which is a carport we don't use otherwise. 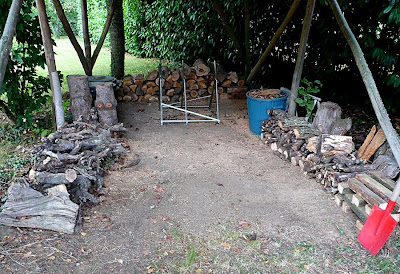 The woodshed and the chevalet
Under the carport, you can see not only Walt's impeccable organizational skills on display, but you can also see his new chevalet. It's the thing he puts the logs on so that he can cut through them with the chainsaw. I think in English it's called a tooit. I figured that out because Walt said he would start cutting wood as soon as he got "a round tooit." And sure enough, as soon as he got the chevalet, he started. It doesn't look very round, but sometimes arcane technical terms have unintuitive meanings. 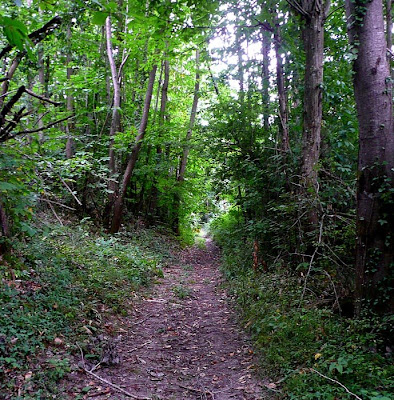 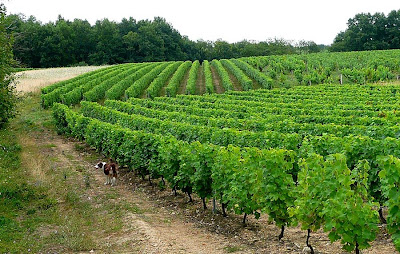 Callie alongside "her" rows of vines
The narrow paved road (about 9 feet wide) is the Route Touristique mapped out for people — tourists — to be able to drive through the vineyards and admire the neat rows of grapevines. Callie hates the paved road, so she hurries along, wanting nothing more than to get to a place where she can jump over the ditch and run down a row of vines to a place where cars can't go. We didn't see a single car along the half-mile of road we walked on, actually.

Callie in the tall grass
We cut across a field that is lying fallow. It is overgrown with various grasses and a lot of carottes sauvages — wild carrots. They're what we call Queen Anne's Lace. Isn't it very French to call a wildflower by a culinary name?
Posted by Ken Broadhurst at 08:05