Eyes on a Citroën

Walt and I have decided we need a new car. Well, not a voiture neuve, but a nouvelle voiture — a used car, une voiture d'occasion. For the small amount of driving that we do — 6,000 km, or 3,600 miles, over the past 12 months — we don't need to buy a new car and suffer the depreciation costs.

What we need is a slightly bigger vehicle than the Peugeot 206. We've been thinking about a station wagon — a used Renault Mégane Estate, a Peugeot 307 SW, or a Citroën Xsara or Xantia wagon, maybe. Out here in the country, I think it's better to stick with a French car, because all the mechanics know how to work on them and parts are easy to find. 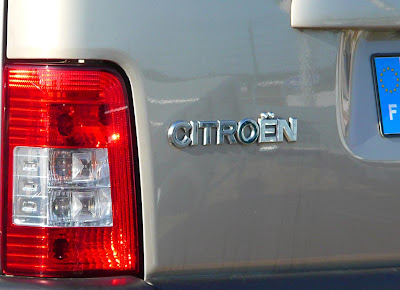 The other body style that would be appropriate would be what they call a monospace here in France: a Renault Scenic, a Citroën Picasso, or an Opel Mériva, for example. There are a lot of Opels, a German make, on the roads in France. And VWs, for that matter. The monospace vehicles are a sort of minivan or station wagon — they are bigger than hatchbacks. I think examples of this kind of car available in the U.S. might be the Toyota Matrix and the Nissan Versa.

I'm leaning toward buying a Citroën. In fact, in 2003, when I bought the Peugeot 206, I really had already decided I wanted a Citroën. But the Peugeot is the car I found, and I needed to buy a car fast, because the rental car we had was costing us a lot of money. The 206 was a used car, and it was just sitting there on the lot at the Garage Danger in Saint-Aignan. It had a one-year warranty on it, and the price was reasonable given its relatively big diesel engine, automatic air conditioning and windshield wipers, and general good looks. 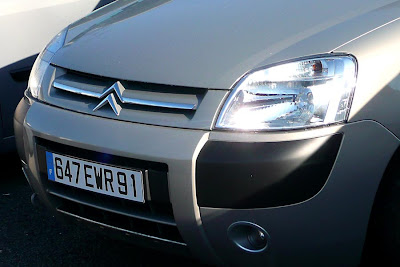 My nine-year-old Peugeot is a little hatchback and the back seat is a tight squeeze. There's almost no leg room. It's really a two-seater, as my mechanic said to me. So what we want now is a real four- or five-seater car, with greater cargo capacity. We think we might try to start going camping again in the summertime — in California, we did that a lot — and we don't see how the Peugeot 206 could accommodate the dog, ourselves, the tent, sleeping bags, coolers, clothes, groceries, water, wine and all the other stuff we'd want to haul along on a camping trip. 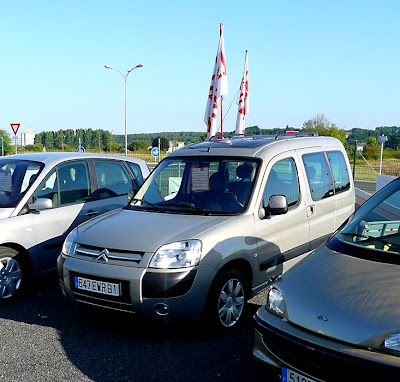 I want a Citroën just for the fun of being able to say I drive one. For a lot of Americans, Citroën is synonymous with the old 2CV, but the fact is that Citroën makes a full line of modern, innovative vehicles. The company was bought out by Peugeot years ago, so a lot of Citroëns and Peugeots share engines, transmissions, and other components. 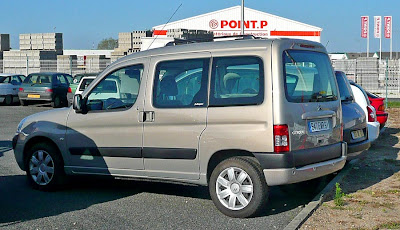 My mechanic has had a very nice-looking Citroën Berlingo on his used-car lot for a few days now. He's closed this week for his annual vacation, so I haven't been able to talk to him about it yet. But it looks like the ideal vehicle. I've been reading about it and reviews say the Berlingo drives and handles more like a car than like a truck. It's definitely spacious for its size, as you can see from the pictures. It sort of reminds me of the Jeep Cherokee Sport W. had in California, but it's smaller. We loved that Jeep and kept it for 11 years. 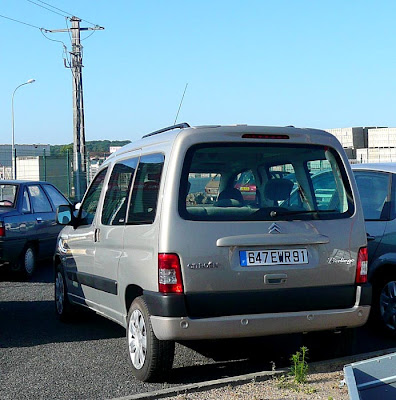 One of my requirements for a car is that it have a diesel engine. A majority of French cars do nowadays. My Peugeot 206 is a diesel and I like it. Diesel engines are poweful, with a lot of torque for getting up hills at low speeds. They are much cleaner, quieter, and peppier than they were 30 years ago. Diesel fuel (gazole or gasoil in French) is available everywhere, and it's 20% cheaper than gasoline/petrol (essence in French). A diesel engine gets 25% better mileage than an equivalent gasoline engine. And a diesel engine will last about twice as long. 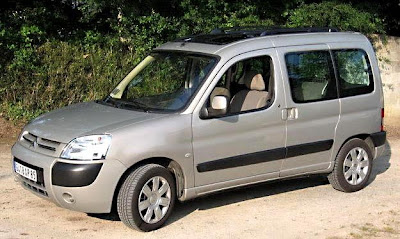 When the garage opens for business again on Tuesday, I'll be going over there to talk to the owner. We're leaning toward keeping the Peugeot and becoming a two-car household again, as we were from 1983 until 2003.
Posted by Ken Broadhurst at 08:05