It's the sugar pectin!

I only recently became aware of the fact that you can buy special sugar for making jellies, preserves, and jams — gelées et confitures — at the supermarkets in France. It costs more than plain granulated sugar, but then it contains pectin, which helps thicken the jelly. The other ingredient in the product, besides sugar (98.7%) and fruit pectin, is citric acid. 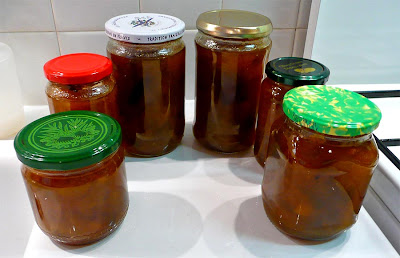 Too much jelly, but it is so good.
I had thought about trying to buy some pectin, so that my jellies and jams would be less runny, but I hadn't seen any in the supermarkets here in Saint-Aignan. I was also being kind of a purist about it. Me, need pectin? No, there's plenty in the fruit I'm picking. A few years ago, I made quince jelly — gelée de coings — and the first batch didn't jell sufficiently, in my opinion. The next batch I made, I boiled until it reached a temperature of 225ºF (107ºC) and it jelled perfectly. I concluded that cooking it until it reached that high temperature was the key to good jelly-making. 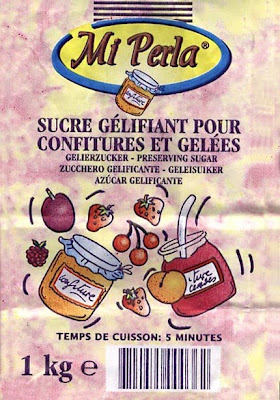 Jelly-making sugar, with pectin and citric acid in it
But when I tried it later with other jellies and jams, the end product was still too liquid. I made a huge batch of apple jelly a couple of summers ago, and it came out great — thick and jiggly. They say apples contain large amounts of pectin, and I boiled not just the apple pulp but the skins and seeds as well. That's where the pectin is. It worked great.

A couple of months ago, I made cherry preserves — confiture de cerises — using the good sour cherries from our neighborhood trees. I followed a recipe that said the way to be successful was to pit the cherries, put them in a big pot and just barely cover them with water, and boil that for 10 or 15 minutes. Then strain off the juice, put the cherries themselves aside, and make jelly with the cherry juice. 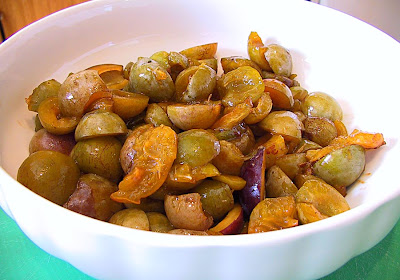 Plums from the trees in the back yard
To thicken the cherry jelly, this particular recipe called for adding a good amount of apple jelly — a pint or more, for the pectin — into the mixture. Once you boiled the cherry and apple mixture for a few minutes, you add the cooked cherries back in and you put the confiture up in sterilized jars. The result was supposed to be a thick jelly with pieces of not-overcooked fruit in it. Mine didn't really jell, though. It stayed too liquid. And that was after I boiled the juice until it reached a pretty high temperature.

Back to square one. In July an old friend from Nomandy visited, with one of her neighbors. We were talking about jellies and jams, for some reason. The friend's neighbor asked me if I had bought special sucre gélifiant at the supermarket for my jelly-making. That such a product existed was news to me. I soon went to SuperU to check out the sugar shelves. There it was — but it was expensive. At something like €2,25/kg, it was more than twice as expensive as regular granulated sugar (€0.89/kg). I passed. 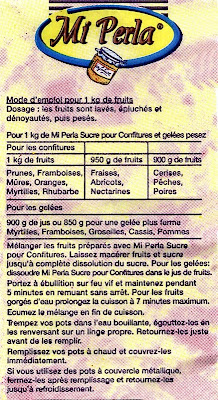 Here are the directions, in French of course.
On the way home, I stopped to buy a few things at the Ed hard-discount store. There I saw Ed's brand of jelly-making sugar, and it was only €1.50/kg. I wasn't even planning to make any more jam or jelly until autumn, when the apples will be ripe. Apple jelly is easy to make. And if I could get some quinces, I'd make quince jelly too. Now the neighbors' tree is covered in quinces, and they've said I can have an many as I want. 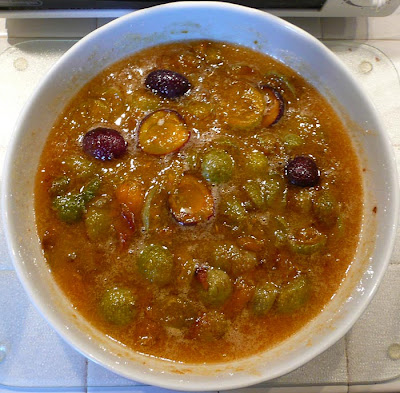 The fruit and sugar macerate together for hours
before getting cooked.
I ended up buying 4 kg of Ed's sucre gélifiant, figuring I would use it soon enough. And soon enough came sooner than I thought, when the plums on the trees around our garden shed started ripening. I was determined to ignore them, thinking there weren't that many of them anyway. And I had already made two batches of plum sauce this summer. "No more jelly!", I told myself.

One afternoon — it was when Susan and Simon visited recently — I made the grave mistake of tasting one of the plums off our trees. It was amazingly sweet and succulent. How could I possibly ignore such luscious fruit? Well, by just letting it all fall to the ground and get eaten by ants and wasps — that's how. It turned out I wasn't capable of doing that. 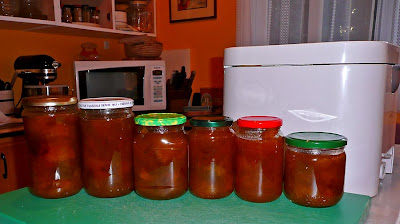 It's only six jars. Well, six more jars, in addition to
all the other ones already in the pantry.
A couple of days ago I went out and picked two kilos of the delicous ripe plums. I carefully pitted them, cutting away any soft spots. Some were excessively ripe, but they were in good shape. They smelled incredible. I kept thinking of the jar of perfectly jelled, sweet plum jam that Caroline's mom brought us when they came over for apéritifs a couple of weeks ago. How did she accomplish that? Is it some Dutch secret?

This time, to make the plum preserves, I followed the directions on the packages of Mi Perla sucre gélifiant. Mix together equal weights of the sugar and of ripe fruit, the package said. Do nothing but wait until the sugar completely dissolves in the liquid rendered by the fruit. (I ended up leaving the sugar on the fruit for nearly 24 hours, stirring it three or four times during that period.) After that, what you do is boil the mixture on high heat for 5 to 7 minutes, stirring constantly. That's all the cooking it needs.

At the end of the 5 to 7 minutes, skim the foam off the top of the jam. Ladle the jelly into sterilized jars and screw on the lids. Turn them upside down and let them cool that way. You'll hear the lids pop when they seal.

The resulting jelly is thick and... well, jelled. Now that it's had a chance to cool overnight, it doesn't move at all in the jars when I turn them upside down. Who knew? It's not magic. It's that pectin sugar. It works.

Now I have to persuade myself not to make any more jam or jelly. We have plenty. We don't even eat that much of the stuff.
Posted by Ken Broadhurst at 08:33