Yesterday we spent the day processing tomatoes again. We made — are still making, actually, because it's back on the stove, slowly reducing, after an overnight rest — a big pot of coulis with, mostly, small red tomatoes. And we did two different kinds of low-temperature roasting with other tomatoes, including big red Beefsteaks and little Golden Romas.

The coulis could also be called puree or even sauce, though it is seasoned only with salt and a little black pepper. We will season it further when we actually cook with it. So that it will take up less room in the freezer or pantry, I'm leaving it on the stove, on low, to reduce by more than half, and to thicken. After the initial two-hour cooking yesterday, we ran it through the food mill to remove all the seeds and skins. 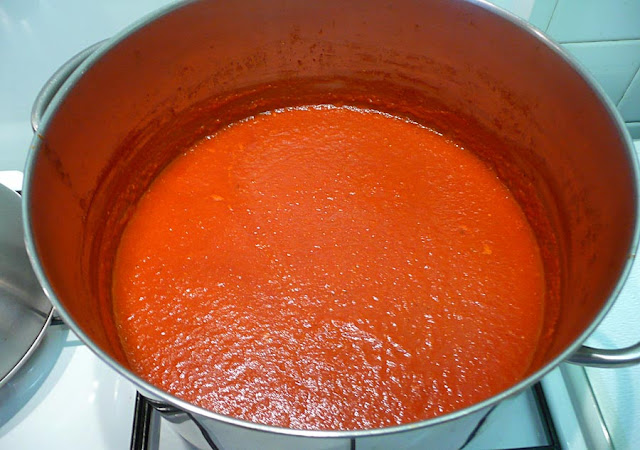 Going for tomato paste — this has reduced by at least half

It will almost become tomato paste — concentré de tomates. It's tricky to cook it down to that degree without having it scorch on the bottom of the pot. I just keep lowering the temperature and letting it go a little longer. Pretty soon I'll have to turn it off, call it done, and pack it for freezing or canning.

Meanwhile, we took the biggest dozen or so red tomatoes we had harvested and cut them into sections — about 6 pieces per tomato. Walt used his fingers to push the seeds and juice out of the sections, and we put all that in the sauce pot. We just wanted sections of meaty tomato to slow-roast. 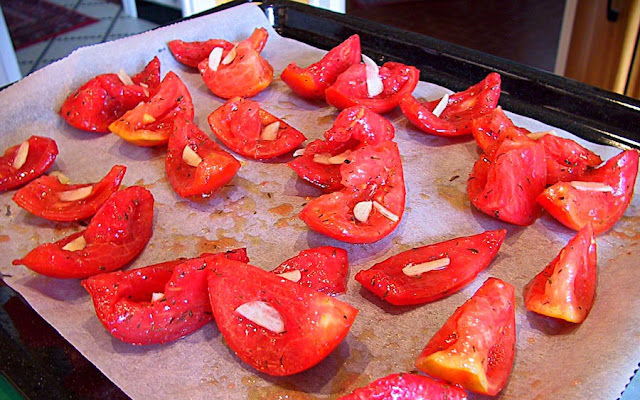 Tomatoes cut, seeded, seasoned, and oiled, ready for the oven

What you do is put all the seeded tomato sections into a big bowl and sprinkle salt, pepper, a little bit of sugar, and a little dried thyme over them. Then toss them around to make sure they all have some of the seasonings on them. Next pour on just enough olive oil to coat them and toss them around in the bowl another time. It's almost like making a salad, and in fact the tomatoes would be good to eat as salad at that point, of course. 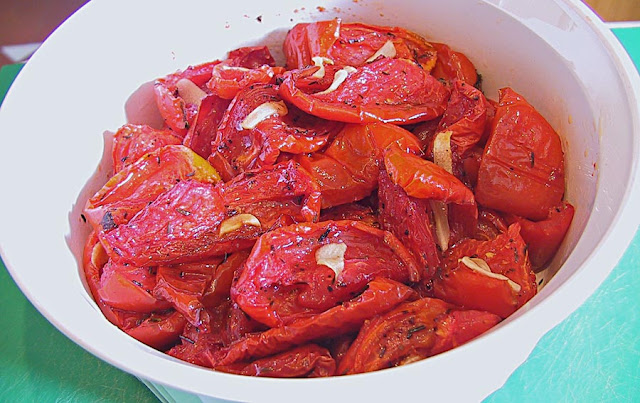 Tomates confites, after roasting for nearly 3 hours at 195ºF

I decided not to go to the trouble of peeling these big tomatoes. We had enough to do without adding that step. I hope I don't regret it. What we were making with them is what is called tomates confites in French — slow-roasted tomatoes. Arrange them on parchment paper on baking sheets and put them in a 90ºC — 195ºF — oven for 2½ hours. Oh, and put some slivers of garlic on them if you want to, for the flavor. 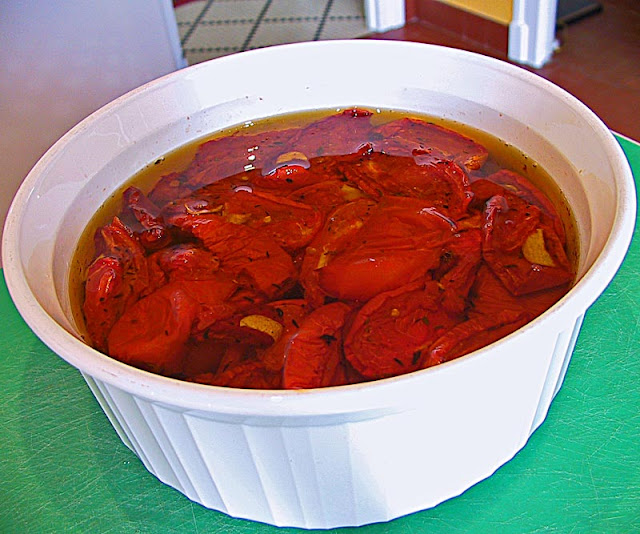 Cover the roasted tomatoes with oil and
keep them in the refrigerator for a week or more.

When the tomates are confites, put them in a bowl and pour olive oil over them to cover. I like to use a blend of olive and sunflower oil for these kinds of things. The olive oil I get here tends to be a little bitter and the sunflower oil tones it down. If you can get a very fruity olive oil, like the oil we used to get in Napa Valley in California, use that. You need to use the tomates confites pretty fast; they'll keep for maybe 10 days in the refrigerator. 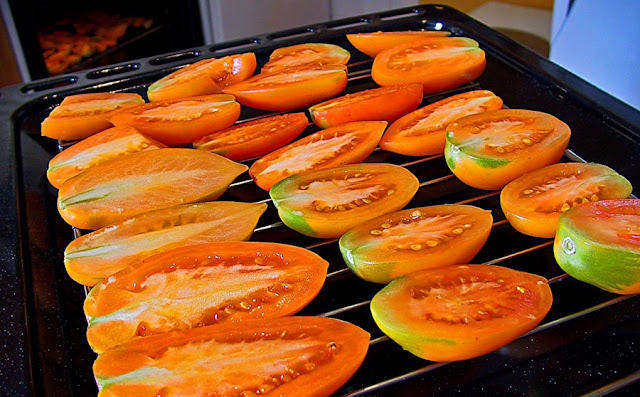 Next project: drying tomatoes in the oven. We used the Golden Romas for that. Drying tomatoes is simple but it takes a long time. There's no seasoning involved (salt is optional). All you do is cut the tomatoes in half (for Romas) or into thick slices (for slicing tomatoes) and arrange the pieces on wire racks. You can take the seeds and juice out of the tomato pieces if you want, but you don't have to. We didn't. 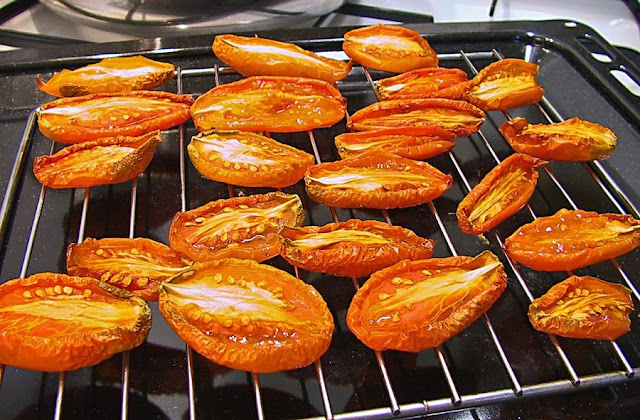 Tomatoes after about 6 hours of drying in the oven.
They're not ready yet.

Put the racks of tomatoes in the oven at that same temperature — 90ºC, or 195ºF — and let them dry slowly for 6 to 12 hours. The method I am following says they are ready when they are leathery but not crispy, and when you don't feel any moisture when you touch the seedy interior — they don't stick to your fingers. Last night at bedtime, I just turned off the oven and let them sit there overnight. They had already been in the oven for 8 hours at that point. I turned the oven back on this morning to finish the process. 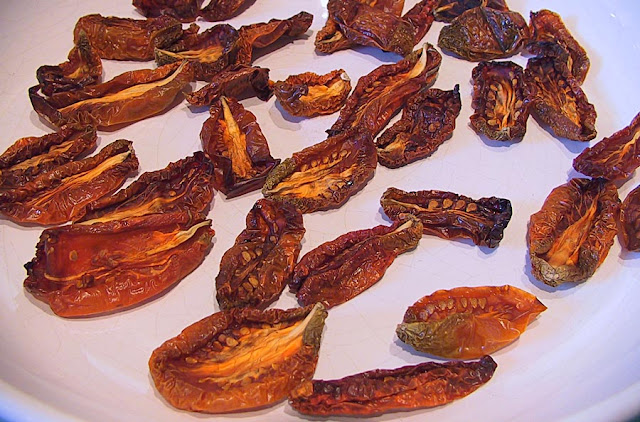 Now they're ready. These dried for 18 hours,
if you count spending the night in an unheated oven.

Oven-dried (or sun-dried) tomatoes turn a much darker color in the drying process. Because of their size or where they are in the oven, some pieces dry faster than others, so remove them as they get done and let the others continue drying out. You can store them in jars or in plastic bags in a cool dark place, according to the recipe I'm using. I'm going to let mine finish drying for a day out of the oven, because I want them well dried but not burned. To use them, you soak them in water or wine to re-hydrate them.
Posted by Ken Broadhurst at 08:08