The first time I ever had yellow tomatoes was when I lived in Illinois back in the 1970s. I had only ever seen red tomatoes up to then.

Imagine! This year we have yellow — or orange — plum tomatoes in our garden, along with little round purple ones. A year or two ago we planted and grew tomatoes that, when ripe, were green with purplish-black "zebra" stripes on them. And we had tiny light-bulb-shaped, bright yellow cherry tomatoes too. (Maybe you can't call them cherry tomatoes if they are that color and shaped like that.) 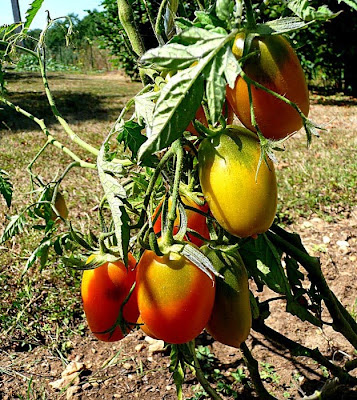 Orange Roma tomatoes from Illinois seeds
growing near Saint-Aignan in France
We have a lot of the orange plum tomatoes in the garden this year. At first they had blossom-end rot or some other malady that caused the bottom of each tomato to get a big black spot on it. Luckily, that didn't last long and now the orange Romas are all healthy. And they are delicious. (Look at this site for seeds).

Since we planted so many tomato seeds of so many kinds in little pots back in the spring, and then transplanted them all higgledy-piggledy in the garden plots out back, we lost track of what variety ended up where and where the seeds came from. We remembered that a friend had given us some yellow tomato seeds back in 2006, but I didn't know we still had any of those. 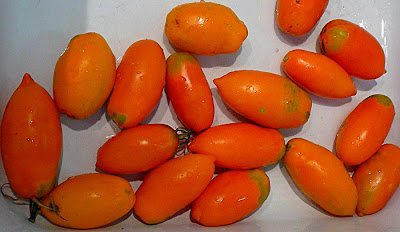 Just a few that we picked the other day
Walt said he thought we did and that he thought he had planted some again this year. Where did they come from? An old friend in Illinois gave them to us when we visited, near Urbana, Ill., in Nov. '06. On this site, they are called Golden Romas.

How do you collect and save tomato seeds? You scrape or press them out of ripe tomatoes, with all their juice, onto a paper towel. Spread them out a little. Let the paper towel dry, and then put it away for the season in, say, a plastic bag. In the spring, you just tear off little pieces of the paper towel and plant them in pots. Easy. 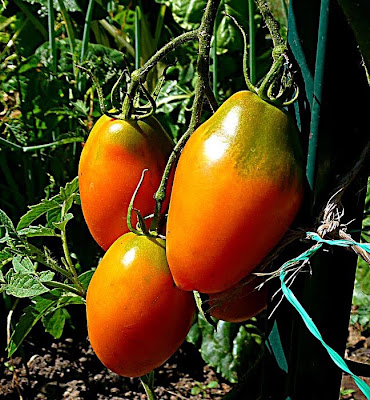 These are clearly ready to pick now.
Yesterday I took these pictures of the orange Roma tomatoes and sent them to Harriett and Tom in Illinois. Harriett confirmed that, yes, those are the same tomatoes she gave us seeds from nearly three years ago. Here's a link to Harriet and Tom's blog, Pups is Pups.

I'm going to make tomates confites out of a batch of the orange tomatoes. They are fleshy and don't have all that many seeds in them, so they'll be perfect slow roasted in the oven with a little olive oil. And you can bet we'll be saving some seeds from them, as well as seeds from other tomatoes we've especially enjoyed this summer, using the paper towel method. 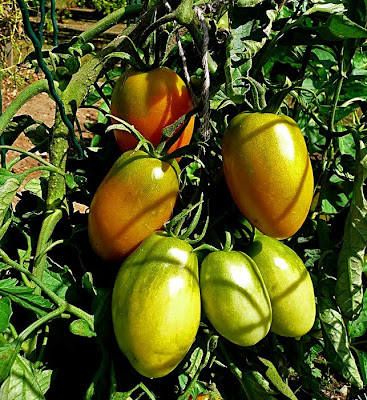 In this photo taken yesterday, you can see that
they haven't all ripened yet — so they're still coming.
A couple of days ago, when Jean and Nick were coming over, I made salsa using a mix of red and yellow tomatoes. Finely dice the tomatoes, some onion, some garlic, and one or two hot red cayenne peppers. Add chopped herbs and some lime juice or hot pepper vinegar. Eat with corn chips. Having tomatoes of two different colors makes it especially attractive. Wish I had taken a picture...
Posted by Ken Broadhurst at 07:37