Food, the car, and the trips

I ended up canning that thick tomato sauce that I made day before yesterday. We just don't have enough room in the freezer, and I found half a dozen jars of the right size down in the pantry. I poured the boiling sauce into the sterilized jars and then processed the jars for 30 minutes in a boiling water bath. I hope that's sufficient to protect us from botulism this winter, when we plan to eat it.

Yesterday I started the process of making rabbit rillettes again. That's potted meat and it can be made with pork, duck, goose, or rabbit. I think the rabbit rillettes will make a good dinner Monday night, when Evelyn, her husband, and their friend Linda will be here for the evening and to spend the night. And if there are some rillettes left — there will be, because I'm cooking two whole rabbits — we will be able to take the leftovers down to the Cantal with us.

Meanwhile Walt is going to make a zucchini quiche and a salad of carottes râpées en vinaigrette over the weekend. With some of our fresh tomatoes as an accompaniment, we are unlikely to go hungry when we get back from Paris on Monday. 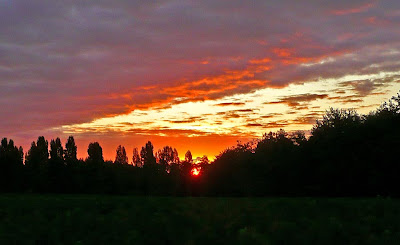 Sunrise over La Renaudière on 26 August 2009
The old Peugeot 206 checked out just fine yesterday chez le garagiste, and I got the air conditioning serviced. It is now blowing colder air again. BTW, I have put the purchase of the Citroën Berlingo on hold, because the dollar is so low right now — one euro is worth about $1.42 American. That means you need to take the price of a car in euros and add 50% to it to get the price in dollars. In other words, €10K = about $15K.

We really don't need to buy a car right now. The Peugeot is doing just fine. I'm going to wait until spring. One of the rules of retirement is: don't spend your money unless you need to — or at least really, really want to. I'm not at that stage yet. 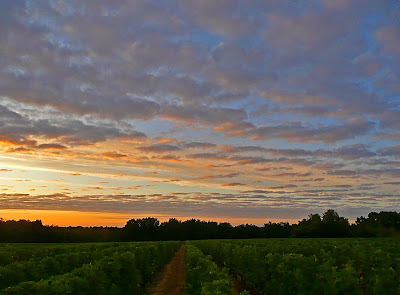 Morning skies over the vineyards near Saint-Aignan
26 August 2009
Today I really have to get going on my plans for the weekend in Paris and the week in the Cantal. If you are confused about where we are going, well, the Cantal is a département in the région called the Auvergne, which is made up of four départements. The Auvergne region covers 10,000 sq. mi. That's about the size of Massachusetts, New Hampshire, or Vermont. Not combined— each of those states, like the Auvergne, is about 10K sq. mi. 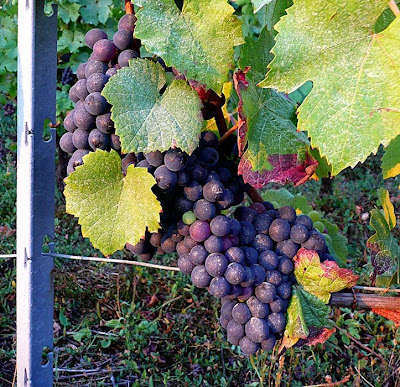 Status report: Touraine grapes in late August
The Auvergne is also the name of an ancient French Province, like Touraine or Provence or Champagne. The old provinces still have a cultural significance, but the modern administrative divisions of France are the départements and régions.

From our house to the town near Salers where we are going next week, it will be a four- or five-hour drive. We will drive down past Limoges, which is a town nearly everybody has heard of because of the china made there. And we will end up at 3,000 ft. of altitude, compared to our 300 or 400 ft. above sea level here in Saint-Aignan.

Callie was born in the Auvergne, but in the département of the Allier, north of the Cantal. Wonder if she will feel at home?
Posted by Ken Broadhurst at 07:41