One of the local landmarks we visited when we first arrived in Saint-Aignan in 2003 was the château de Montpoupon. It's only a 10-minute drive from our house, and I'm not sure, but I think we might have come upon it by accident one day when we were out driving around in our new, air-conditioned car. 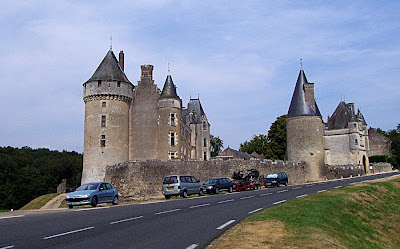 The château de Montpoupon was built over the course
of the centuries, starting in the Middle Ages.
Those were the hottest days of the hottest summer in more than 25 years here in France. And we had just arrived here from one of the most consistently chilly places on earth, San Francisco, where we lived just a couple of miles from the frigid Pacific Ocean. It's a wonder we survived the Great 2003 Heat Wave in France — and at certain moments we thought we might not. 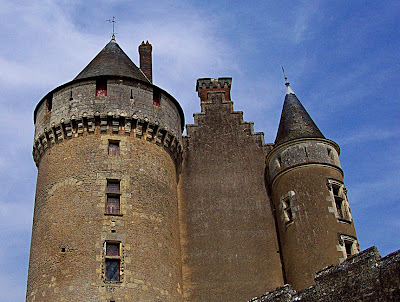 The old round towers are medieval, I think.
The only way to escape the heat, besides taking a cold shower, was to go out for a ride in the car. The rented Opel we drove until the end of the first week in August was not air-conditioned, but the Peugeot that we ended up buying was, and we took advantage of it. We drove around with the cold air blasting out of the dashboard vents, watching the car thermometer that gave us the outside temperature. I remember several times when it read 40ºC. That's 104ºF. 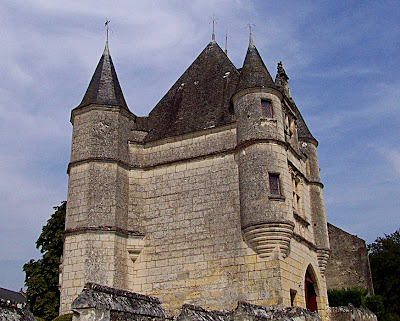 This entry gate dates from the Renaissance.
Friends from San Francisco came to visit around that time, with their one-year-old baby. They had been neighbors of ours, so they were used to the same kind of chilly weather. It was so hot in the house that we set the baby up in a crib in our downstairs entryway, which is the coolest part of the house. The parents could look down the stairs and see the baby asleep in the crib. 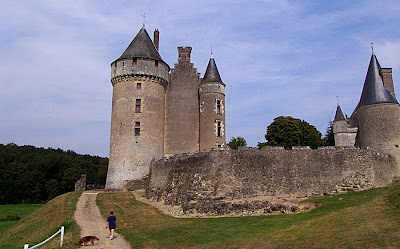 There's Walt walking dearly departed Collette at Montpoupon.
Our neighbors across the street had lent us not only the crib but also a big plastic tub we could use to give the baby her baths. The one-year-old spent quite a few hours over the course of their stay just soaking in cool water out on our front deck, in the shade. That kept her from getting overheated or dehydrated. 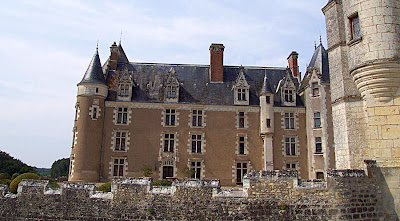 The living quarters at Montpoupon aren't as ancient as the rest.
By the third night they were here, our friends de-camped from the upstairs guest bedroom, inflated the air matresses we had bought to sleep on before our furniture arrived from Calfornia earlier in the summer, and slept on the floor in the entryway, with the baby. Again, it was the coolest part of the house. They couldn't stand the heat upstairs. Walt and I just sweated through the tropical nights in the other upstairs bedroom. 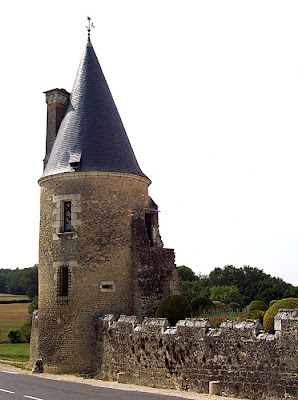 Another old tower from medieval times
One of the places we visited with the friends and the baby was the château de Montpoupon. We thought the big old stone building would be cool inside, with its thick walls. It was an interesting guided tour, but it seemed like most of the tourists in the Touraine had come up with the same plan that we had. There was an enormous crowd in the château, and the heat radiated by their bodies more than canceled out any cooling effect the vieilles pierres (old stones) of the château might have had.

All these pictures are from August 2003. Here's the Montpoupon web site. I've posted Montpoupon pictures many times on this blog — September 2008 and September 2007, for example.
Posted by Ken Broadhurst at 07:35