It's been a while, I think, since I've posted any sunrise or sunset pictures. I think that's because our skies have been so clear this summer. Sunrises and sunsets without clouds, while magnificent in person, just aren't that photogenic.

I slept until 7:00 this morning and then took Callie out for our walk as soon as I got out of bed. I'm glad I did. Ten minutes after I took these pictures, the sky had changed completely. The sun rose from behind the trees and all the contrasts faded away in the bright light.

Sunrise over La Renaudière
24 August 2009
Then the cloud off in the distance to the west moved over us. When I got home with Callie, I grabbed a cup of coffee and went out to water the garden. I've been watering every other day for a few weeks now. The big cloud moving overhead and the rising sun combined to produce a magnificent rainbow. 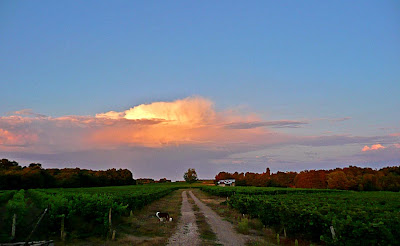 There's Callie on her way out into the vineyard. Looking west...
I debated with myself about turning off the water and going in to get my camera again, but decided against it. I just wanted to water and then come back to my computer to look at the sunrise pictures from 45 minutes earlier. And post some of them. 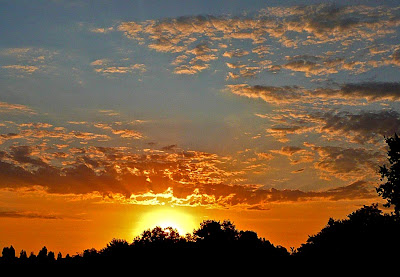 Looking east from farther out in the vineyard, 7:15 a.m.
It started sprinkling rain as I finished watering. Now there is a huge bank of dark purple clouds off to the west. The weather report on TéléMatin a second ago said we should expect thunderstorms with hail today. We need the rain, because we've had practically none in August. Maybe it would be a good idea to go pick some more tomatoes right now.
Posted by Ken Broadhurst at 08:48