Today is supposed to be the hottest day of the year so far in much of France. The southern half of the country is under a severe heat warning. People are being told to stay inside if possible, to drink a lot of water, and to avoid physical exertion. Temperatures are 20ºF/10ºC higher than "normal" for this season, and will hit 100 in many places.

Here in Saint-Aignan it's a pleasant morning, with a temperature in the upper 60s F. But MétéoFrance is again predicting that our temperature will go as high as 95º this afternoon. Remember, we don't have air-conditioning. Our house is already warm, and it takes the full brunt of the afternoon sun. We will be keeping still later today. 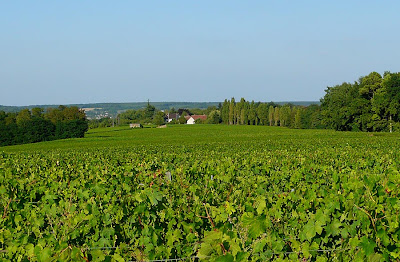 A typical day in the summer of 2009: the vineyard
with our house and hamlet in the distance
This kind of weather makes us all think back to the summer of 2003, when the hot weather started in early June and lasted into September. I have lots of memories. For example, on about June 3 Walt and I drove from our friends' house in Rouen up to Etretat, on the English Channel, and had lunch outside on the boardwalk there. It was already really hot, and that's unusual in that part of Normandy — especially at such an early date. 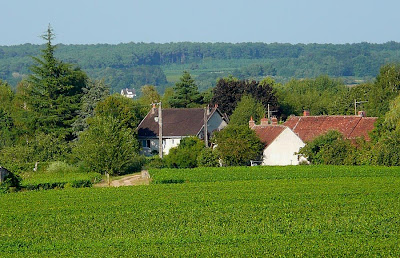 And a 2009 close-up of our house,
the newer one with the brown roof
When we arrived in Saint-Aignan on June 7, 2003, it was burning hot here too. We had no furniture or appliances, and the grass had grown up to knee-high (and waist-high in spots) during the two months since the house had become ours but we were still in the U.S. Walt had to cut all that down — half an acre of it — first with a brush-cutter and then with a mower. I was busy scrubbing walls, floors, and windows in the house. We were suffering from the heat but excited about getting our new house whipped into shape. 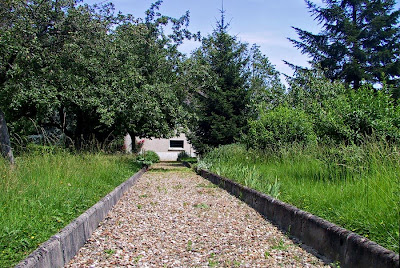 What our back yard looked like when
we arrived in Saint-Aignan in June 2003
This morning I started looking back at some e-mails I sent to people that summer of 2003, mentioning the weather:

June 20 It's supposed to be in the upper 80s or even lower 90s for the next three days. We're going to take it easy. The grass is brown now, because it's been hot and we've had no rain in two weeks. 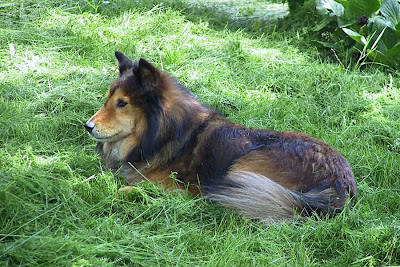 2003: our dog Collette enjoyed the cut grass and
didn't seem to mind the heat. She was 11 then.
June 25 It's real hot again this afternoon.

Again June 29 It's supposed to hit 95 degrees here again today. So we're not planning to be very active in the afternoon. No such thing as air conditioning here. This weather is pretty unusual.

July 1 The temperature hit 90 F on Sunday, but it's been much cooler since then. 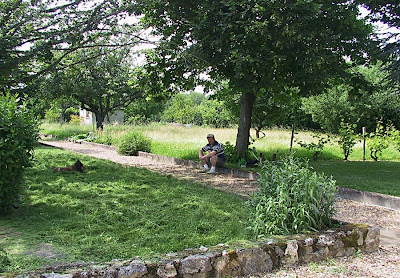 Walt taking a break from cutting the grass in June 2003 —
it was so hot that first year
And so it continued through most of August. We had come from San Francisco, where hot weather is a rarity. We were not expecting to arrive in France in the middle of a long-lasting heat wave. We had rented a car in Paris in June, and it turned out not to have air-conditioning. I told Walt that we needn't worry about it, because "it never stays hot in France for long stretches." Boy was I wrong. 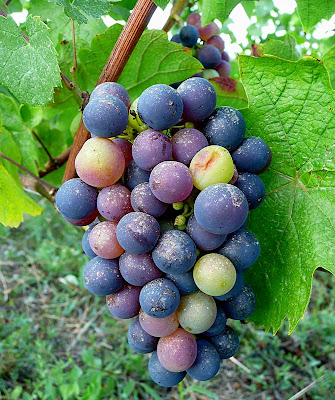 2009: the grapes are happy
We started getting used to having 95º and even 100º days. In early August, we finally found a car to buy, and we made sure it had A/C. We would go out for drives in the afternoon just to escape our oven of a house and enjoy an hour or two of "conditioned" air. We got to see a lot of the surrounding countryside that way. By then we had survived the worst of the heat. 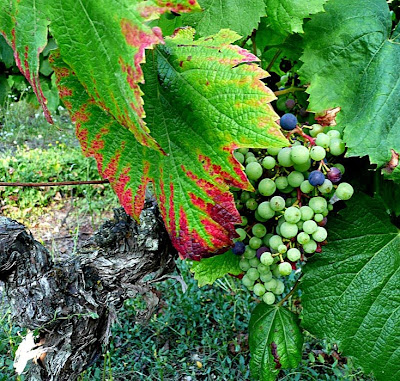 Grapes leaves in August 2009, starting to look autumnal
Our friend Cheryl came to visit in September 2003 and the weather was still hot, though not quite as oppressively so. It was very pleasant by then, actually — kind of like this summer's weather. We can't really complain. It's going to be hot today, but it's supposed to cool down drastically by Friday.
Posted by Ken Broadhurst at 06:54