French Wikipedia defines the term « canicule » the way I heard one of the weather forecasters explain it on the France2 TV news earlier this week: 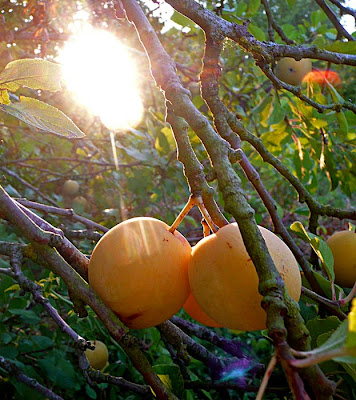 Plums ripening on a tree out back.
Picture taken at about 7:30 a.m. today.
That says that in France:

"The term dog days describes a period of time, in a specific area, when temperatures remain high and there isn't much thermal variation between day and night. That means, in approximate terms, nighttime temperatures that stay above 65ºF in the north or 68ºF in the south, and daytime temperatures in excess of 86ºF in the north and 95ºF in the south, lasting at a minimum for several days or, especially, several weeks, with heat building up faster than it can dissipate by convection or radiation." 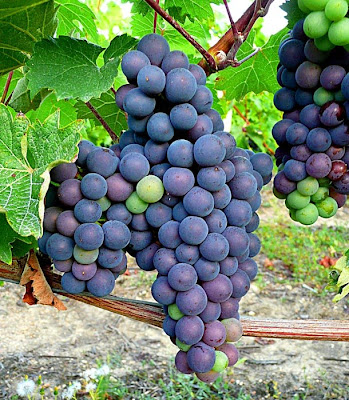 The grapes are ripening fast now.
As CHM pointed out in a comment yesterday:

Canicula is the Latin name of the Dog Star, Sirius, in the Canis Major constellation. Sirius rises and sets at the same time as the Sun from July 22 to August 23. It usually is a period of great heat, that's why it is called canicule, as well as dog days for the same reason. 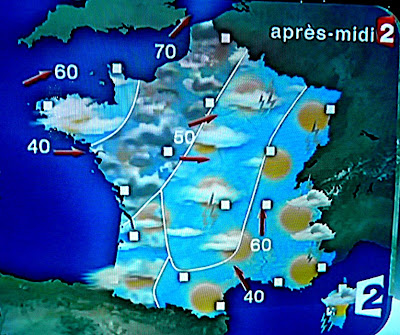 The forecast for this afternoon. The numbers are
wind speeds in kph. Saint-Aignan is under the
red arrow right in the middle of the map.
So there you have it. Those so-called high temperatures — lows of 65ºF and highs of 86ºF in northern France, which would include Saint-Aignan and Paris — might not seem very high if you live in the American South, on the East Coast, or in much of the American Southwest. And there is nowhere near the humidity that you get in places like Washington DC or all the U.S. Southeast. 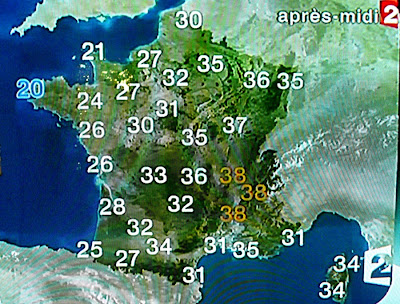 Today's predicted highs: 30ºC in Saint-Aignan. That's 86ºF.
Now 38, in Lyon & Grenoble, is hot. That's just over 100.
It's all cultural. It's the way houses in France are built. It's the fact that home air-conditioning is nearly non-existent. I say that knowing that many people in France are equipping their homes with different kinds of roll-about or wall-mounted air-conditioning units. I think that's a mistake for the environment, but who am I to judge?

In northern France, at least, despite the exceptional hot spell that comes along every few decades (1947, 1976, and 2003, for example), there just isn't enough hot weather to justify the investment in air-conditioning. And central air conditioning is not practical because almost no houses have forced-air heating systems that can be adapted to accommodate air-conditioning. 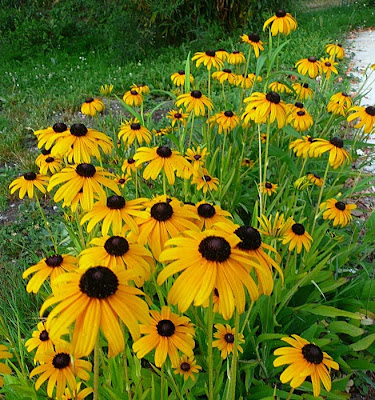 A stand of black-eyed susans in the neighbors' garden
Cast-iron radiators don't really make good air-conditioning units. French windows, which open into the house like doors, don't lend themselves to the installation of window-unit AC.

Our temperature hit 33ºC yesterday afternoon — just over 91ºF. It wasn't unpleasant at all, but I admit that I was "glowing" when I got back from the walk with Callie at about 7:00 p.m. The low this morning was about 70ºF. It feels pleasant right now and it's supposed to cool off later today, with some rain coming in.
Posted by Ken Broadhurst at 08:16