We had good news yesterday, I think, about one of the realities of living here in France as American citizens. The reality is that we both must always have an up-to-date residency permit in our possession. The permits are granted by the people at the prefecture up in Blois and up until now have been renewable every 12 months. We got our first ones in September 2003, so this year’s application was our seventh.

Because we are two Americans, not one American married to a French citizen, we are in a more delicate situation than most English-speaking immigrants. In fact, the British and Irish, as Europeans, no longer need residency permits at all in France or the other European countries. The borders are open for them, and they can come and go as they please, with no formalities imposed beyond getting a French driver’s license if they stay here very long. Americans married to French citizens also have a special status, of course.

American tourists are allowed to stay on French territory for three months at a time without any kind of visa. The U.S. passport suffices. Since we moved here in 2003 with the intention of staying, we had to apply to French consular officials for a long-stay visa before coming into the country. And as soon as we arrived we had to apply for a carte de séjour up in Blois, our area's administrative center. 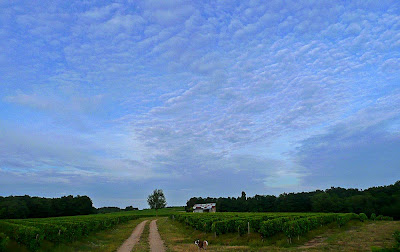 Callie headed out for her morning walk in the vineyard
This year, we decided the time had come for us to apply for a 10-year residency permit, called a carte de résident, rather than just continue with our annual permit, the carte de séjour temporaire. The card granting us “temporary residency” rights categorizes us as visiteurs in France. That’s funny, because we are residents for tax purposes — anyone who resides in France for more than six months out of the calendar year is a resident in that year for tax purposes, but not necessarily for immigration purposes.

I made a phone call to the Service des Étrangers (the immigration office) at the prefecture in Blois back in June when we received the annual letter telling us it was renewal time. The phone rang 12 or 15 times before anybody picked up. The woman on the other end of the line seemed a little harried. I told her I wanted to apply for the 10-year card and she asked me if I had a regular income — a retirement pension, for example. I said I did. She said that I should write the prefecture a letter explaining my situation and requesting the carte de résident.

Send that letter in along with all the papers you normally send for your renewal, she said, and we will examine your file. The documents we send every year are our birth certificates with translations; copies of our U.S. passports; copies of the residency permits that are about to expire; proof of our address (for example, a recent utility bill); and, most importantly, documents proving we have the financial resources to live here for another year without seeking remunerated employment.

So we wrote our letters of application — they have to be in French, of course, so if you don’t write good French you need to get help from someone who does — and we sent them in with all the other papers, hoping for the best. 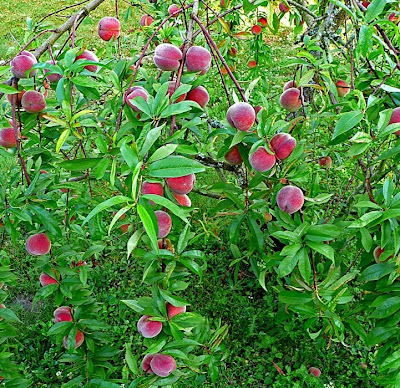 Peaches are no exception to the great fruit crop
that we're getting this summer around Saint-Aignan.
A couple of weeks ago, our neighbor, who is the mayor of the village we live in, invited us over for the evening. She is good friends with Josette, the woman we bought our house from in 2003 — they were neighbors for many years — and Josette was actually staying with the mayor and her husband for a few days. We consider Josette a good friend too.

We hadn’t all gotten together in a while, and we were sitting out in the garden talking about life here and local happenings over a glass of wine and some finger foods. The subject of other English-speakers who live and own property around Saint-Aignan came up. There seem to be quite a few of them, but not many Americans. That led to a discussion of our legal status as foreigners and residents here.

I told Madame le Maire (don’t think my use of the title means our relationship is formal and stiff — she is my age and we are on a first-names basis with her and her husband) about our application for the 10-year resident’s cards this time. I was happy when she offered to make a phone call in support of our application to the prefecture in Blois. I hadn’t wanted to bother her with it, because I know she has a lot of responsibilities as mayor of the village (pop. 1200).

A couple of weeks went by and I wondered if the mayor had remembered to make that phone call, but I didn’t want to be pushy about it. I figured if the powers-that-be refused our request for the 10-year cards this year, we could always apply again next year. Then I could ask for the mayor’s support. 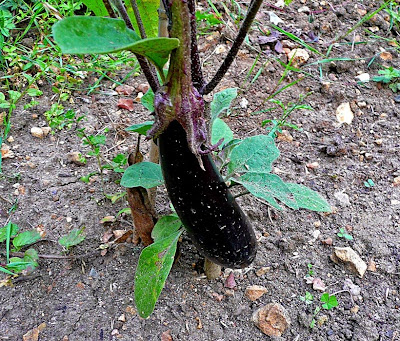 We'll be harvesting eggplants/aubergines soon,
to go with all the tomatoes.
Yesterday, Walt went out for a walk in the vineyard with Callie late in the afternoon. He came back with the good news. He ran into the mayor and her husband, who were out on a bike ride, while he was walking. They stopped and talked for a couple of minutes.

Madame le Maire told Walt that her office has received an inquiry from the prefecture about our status and standing. “They want confirmation that you own your house,” she said, knowing that we do. “They want to know if you speak French,” she said, also knowing that we do. “And they want to know if you are ‘integrated’ into local life and village activities,” she said.

“Integration” into French society and the ability to function in French are important considerations here. Owning your own house is important too, I think — it means you have a long-term investment and a commitment to staying. Madame le Maire said she and her staff would be supplying “the right answers” to all the prefecture’s questions.

So it looks like we are on our way to getting our long-term residency permits. That permit is different from the short-term permit in an important way: it allows the holder to seek employment in France. Don’t worry, though. We have plenty to do in the house and garden without going out to look for gainful employment.

Of course, nothing is certain yet, and the decision won't be made for at least another month. We're keeping our fingers crossed.
Posted by Ken Broadhurst at 06:55