That's how many ripe tomatoes we picked in the garden in about 15 minutes' time yesterday afternoon. Nearly 25 pounds. The temperature hit 89ºF late in the day, and the dry conditions were perfect. The last two hot days brought a lot of tomatoes to perfect maturity. 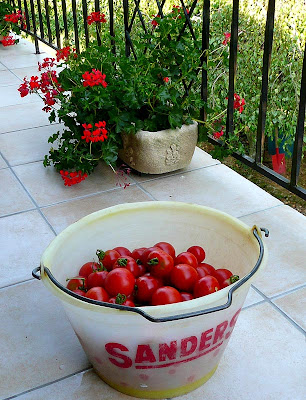 This bucket was here when we moved in.
It's perfect for gathering tomatoes.
Most of the fruit we picked consisted little round salad tomatoes, mostly a little smaller than tennis balls. We're not sure what variety they are, or whether they are actually several different kinds. We planted many pieds of many varieties, and then we mixed them all up. And we ended up setting them all out in the garden — 35 or more plants. 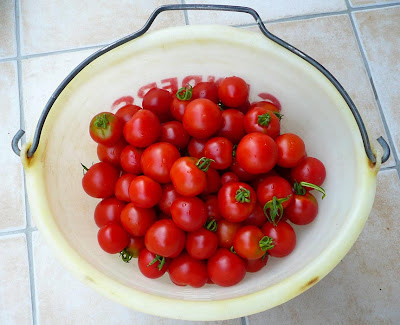 Little red salad tomatoes
Then there were a few gigantic tomatoes. One, all by itself, weighed 900 g, which is two pounds. A couple of others were nearly as big. And several were more or less softball-size. 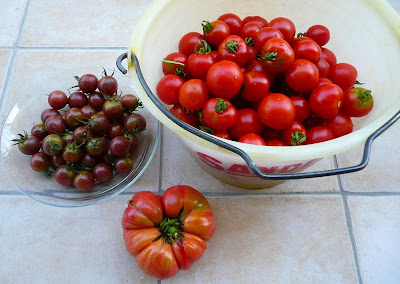 For scale...
Two varieties that are easy to recognize are the little yellow plum tomatoes and the little round purple ones. There is one problem with tomatoes this season in Saint-Aignan: a lot of the plum-shaped ones have a black spot on the bottom of them. It must be some kind of fungus. It seems nearly everybody's tomatoes are showing the symptions. I don't know why the plum tomatoes are especially vulnerable to it. Our little yellow plum variety is not immune. 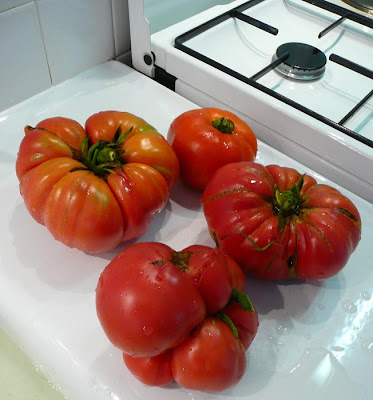 Some of the bigger specimens 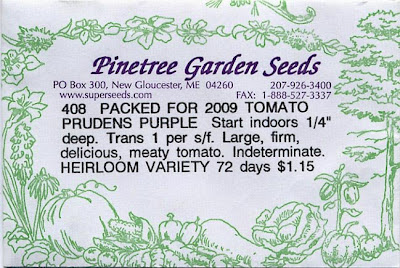 Seeds for Prudens Purple tomatoes, pictured below
The purple ones are immune, apparently, and we're glad of it. They are beautiful clusters of little round berries the size of a pingpong ball or smaller. The ones we planted came from seeds packaged by the company called Pinetree Garden Seeds, located in New Gloucester, Maine, U.S.A. If they were a little smaller, they'd look like grapes. 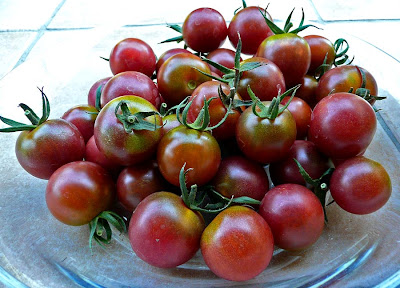 Prudens purple
Today I'm going to make tomato purée, or at least tomato sauce, using nearly all the tomatoes we picked yesterday. We'll keep out the purple ones for salad. I'm hoping to make a fairly thick purée that I'll run through the moulin à légumes (food mill) with the finest blade to remove all skins and seeds. 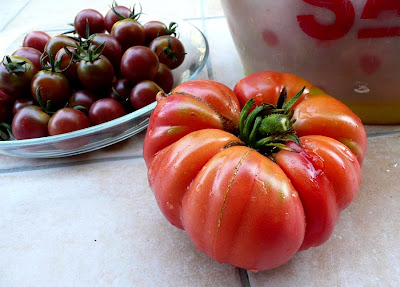 Another picture of that behemoth, next to the
little purple tomatoes. 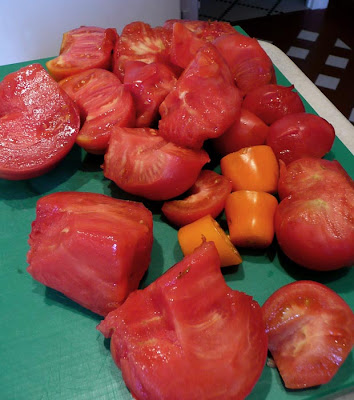 The beginnings of the sauce-making process
I plan to can the purée — put it up in sterilized jars that we can keep in the cellar over the winter. The freezer is still just too full, and we are going to have a lot more tomatoes in August and September, as far as I can tell. We'll also have aubergines and a lot more chard. 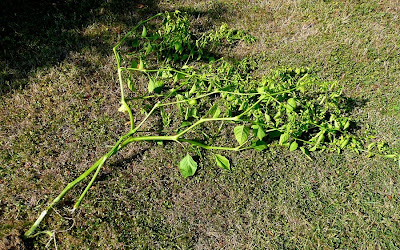 This is a tomatillo plant I pulled out
because it had almost no fruit on it.
Tomatillo plants grow wide and leggy, with a single fruit at each "articulation" point. They really need to be planted in their own plot, because among the tomatoes they send out branches that get mingled and tangled up in the tall tomato plants.
Posted by Ken Broadhurst at 07:52