Notice that I used the French term for eggplant in my title, as my British friends very sensibly do whenever they talk about these vegetables. They just call them aubergines, without flinching.

What a confusing term eggplant is in American English! The singular "eggplant" is okay to describe the vegetable itself (it's a fruit, really) — it's "an eggplant." But even that's slightly off kilter, because it's not a plant, but just a part of one. It's not an egg either, but you knew that. 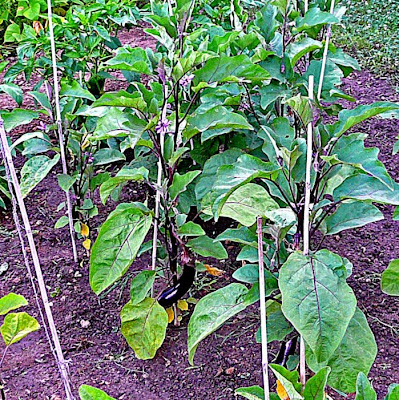 Eggplant plants
What do you do with the plural? Is "eggplant" a count noun — "Here are some eggplants." — or it it a collective term — "I'd like three eggplant, please." I really don't know. I'm pretty sure that I'd day: "I bought some eggplant at the store today," using the collective singular. 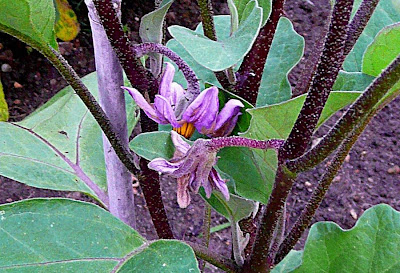 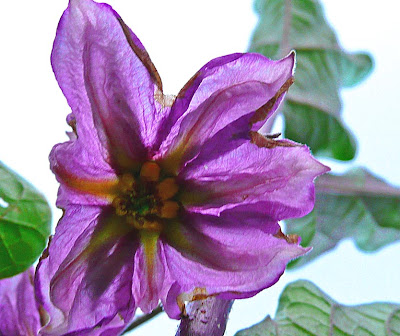 Fleurs d'aubergines
Click the pictures to enlarge them for a better view.
And then what is the plant itself called? An "eggplant plant"? I feel silly saying that. "I'd like three eggplant plants, please." In French it's easier. For some reason, a plant is called « un pied ». Yes, "a foot."

I just did a Google search on the term pied de tomate and I see that some people pluralize only the word pied when they talk about several tomato plants, or pieds de tomate, but others make both words plural: trois pieds de tomates, for example. Either way, the S's aren't pronounced, so when you say pieds de tomate(s) nobody knows whether you're putting an S on tomate or not. Just don't write it.

In France, then, you might buy "six eggplant feet" to plant in your garden. That's six eggplant plants, and you probably didn't even know eggplant — eggplants? — had feet. I think you have to understand "foot" as the base of the plant — the rootstock. The thing it stands on. 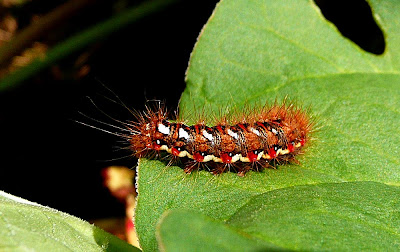 A caterpillar on a rhubarb leaf
At least in French you don't have to say thing like "I'm going to plant some eggplant plants in my garden." And even in the U.K., you are exempt from having to use such a clumsy expression. You'd just plant an aubergine plant. That just rolls off the tongue, doesn't it? 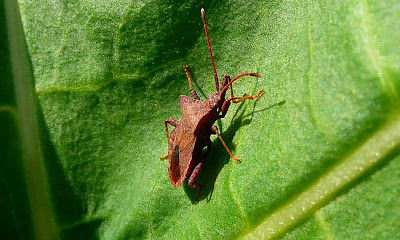 Une punaise on a rhubarb leaf.
The French-English dictionary translates punaise as "bug."
Okay, I got carried away. Yesterday I didn't plant any eggplant plants, but I did weed some aubergine plants. They needed it. First, there was a lot of coriander growing among them, and it had all gone to seed. We are going to save the seeds for future plantings. There was also a lot of crabgrass growing on the ground under everything. I wet the earth well to soften it up sufficiently, and I went at the crabgrass with the weeding tool. It came out of the ground without much resistance. 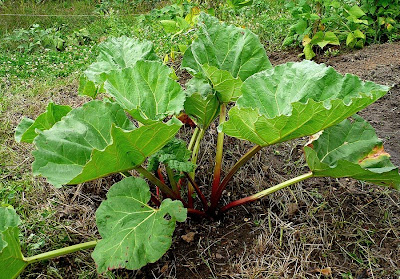 Rhubarb, the second coming
On a roll, I then weeded the rhubarb patch, which is right next to the aubergine patch. The rhubarb turned out to be surprisingly robust-looking. It was so overgrown we hadn't seen it in a while. We'll have a second rhubarb crop this year. There were quite a few caterpillars, bugs, and big orange slugs on the ground around the pieds de rhubarbe and on the leaves.

Today, I'm going to unleash my fury on the tomato patch. There are way too many nasturtiums growing in there, not to mention serious, natural, hardy, local weeds. Yesterday Walt spied a nearly ripe tomato about the size of a volleyball in the middle of the tomato patch, but you'd need a machete to get in there to pick it. Now where is my machete?
Posted by Ken Broadhurst at 07:16