And I'm not talking about the wine (though it's dry too). I'm talking about the summer of 2009. Everything around Saint-Aignan is parched. The water holes (les trous d'eau) scattered around the vineyard are either dry or nearly so. The level of the little pond out back is very low.

It's not so much that it's hot. Our high temperature did not go above 27ºC/81ºF yesterday afternoon, and it is cool this morning — 14.5ºC/58ºF. It's true that Saturday and Sunday were 90º days (or close), with temperatures near 32ºC. The weather report on TV right now says it will be that hot again today. 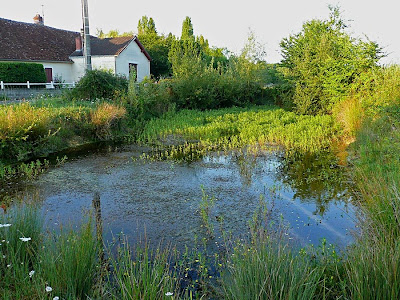 The pond is very low and the fish are at the surface, gulping
for air. It has also been invaded by a non-native weed. (Here's
a link to a picture of the pond in winter a couple of years ago.)

But this is nothing compared to the summer of 2003, the year of the great canicule or heat wave, when so many died of dehydration and exhaustion in France. But it is probably just as dry this year as it was back then, our first summer in Saint-Aignan.

I just looked back at rainfall statistics we've kept since 2005. Summer precipitation totals, for June, July, and August, look like this: 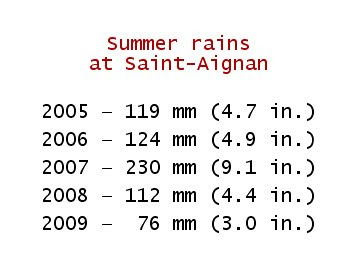 It seems obvious that a normal summer's rainfall here would be between 4 and 5 inches. Look at 2007 — that explains our failed garden that year. The surprising year is 2008, because looking back on it, it seemed like a cool damp summer. Maybe it was humid and cool, but it wasn't all that rainy, according to the figures. The impression depends on whether the rain falls steadily and often, or hard and infrequently. 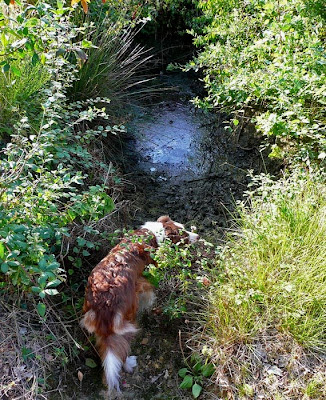 Callie us used to getting a drink from this water hole
in the vineyard. But right now it is pretty much dry.
And August 2009 isn't over yet. The weather might change. We are probably due for a rainy spell. September is often a dry month, however, and that's good for the grape harvest.
Posted by Ken Broadhurst at 08:50