The fruit of the wild carrot

Did you know that the plant we in America call "Queen Anne's Lace" is known elsewhere, including in France, as the wild carrot? It actually is the wild carrot, as Susan of Days on the Claise has pointed out. It grows wild in Asia, Europe, North America (where it was introduced by humans), and elsewhere around the world. It reputedly originated in Afghanistan.

The wild carrot is in theory edible, but the root turns woody very early in the plant's development cycle, and that makes it a lousy food. The "domesticated" carrots we eat were developed in Holland in the 16th and 17th centuries by a process of careful selection to emphasize the root's desirable culinary characteristics: sweetness and tenderness. 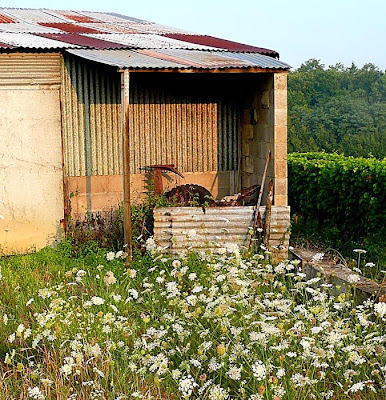 Lots of wild carrots out in the vineyard
Here in Saint-Aignan, wild carrots grow everywhere, including around the vineyards and along the roads that run through them. Carrots, including wild carrots, are biennial plants. They flower in their second year. And then the flower becomes a big cluster of seeds — which are little fruits, in reality. 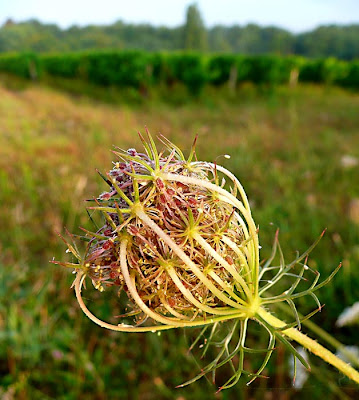 The Queen Anne's Lace flower in its later stages of development
In French the flower cluster is called the inflorescence and, in its later stages, it becomes the infrutescence, or fruit cluster. According to the French Wikipedia entry on the subject, « Les fruits sont des diakènes qui portent des côtes munies d'aiguillons participant à leur diffusion par les animaux. » That's a mouthful. 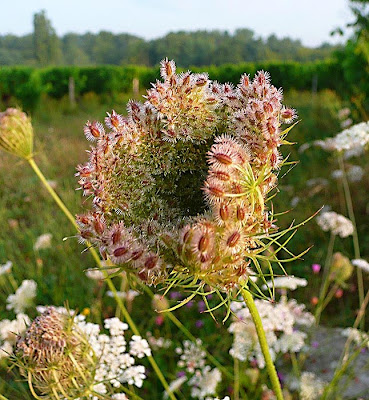 The fruit cluster of the wild carrot
"The fruits are diachenes with needled ribs that facilitate their diffusion by animals." In other words, the seeds stick in animals' fur. We cavalierly call them seeds, but it fact they are little fruits with a single seed in the middle. Did you know that carrot seeds have been used as a contraceptive? Take a teaspoon of them for birth control; Hippocrates supposedly prescribed them for that purpose more than 2,000 years ago. 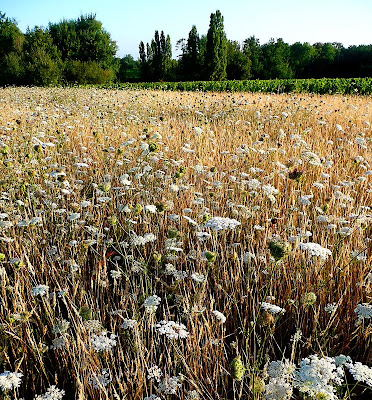 A field of Queen Anne's Lace
Be careful if you handle wild carrot plants. You can have a reaction called "phytophotodermatitis." That's a reddish rash that can turn into blisters on your skin. The blistering is caused by hypersensitivity to ultraviolet light, so get indoors as fast as you can if you get the rash. 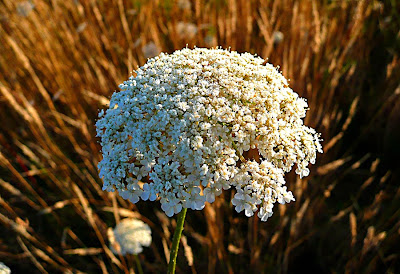 L'inflorescence de la carotte sauvage
What a wonderful world we live in! Danger is everywhere.
Posted by Ken Broadhurst at 06:52