Stuffed tomatoes are a summer classic in France. They are something people make and eat during the tomato season, July through September.

How do you make them? Take good ripe tomatoes and cut a slice off the top of each (to make what's called un chapeau in French). Scoop the flesh and seeds out of each tomato with a spoon (and a knife if necessary). Be careful not to pierce the skin. Sprinkle a pinch of salt into each hollowed-out tomato and place all of them upside down on a plate to drain for 20 minutes. The salt draws out some of the tomatoes' juice and seasons them at the same time. 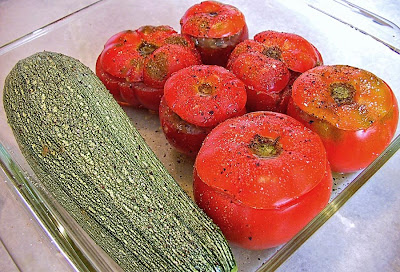 Raw tomatoes stuffed and ready for the oven.
The raw zucchini is stuffed with the same mixture.
Meanwhile, chop some cooked meat (leftover roast), or some cooked ground beef. Chopped cooked chicken or turkey would also be good. (You can also stuff the tomatoes with cooked rice instead of meat.) Mix in chopped onion and garlic, parsley or other herbs, and salt and pepper. Stir in a whole raw egg to bind the meat filling together.

Put about half a teaspoon of raw rice into the bottom of each hollowed-out tomato. Then fill the tomatoes with the meat mixture. The raw rice will absorb a lot of the liquid released as the tomatoes and stuffing cook. Put the lid back on each tomato, put them on an oiled pan or baking dish, and put them in a 300ºF oven for an hour or longer. That seems like a long time, but that's the way you cook them so that everything is thoroughly done but not burned. 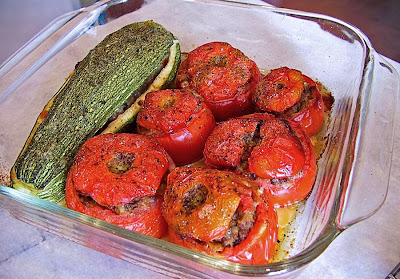 Stuffed tomatoes (and a stuffed zucchini)
after an hour in a 300ºF/160ºC oven
Here's Monique Maine's recipe (my translation):

Cut a slice off the top of each tomato. Spoon out the seeds and flesh. Salt the inside of the tomatoes, turn them upside down on a plate, and let them sit for 20 minutes.

Meanwhile, chop the cooked meat (or cook the ground beef). Chop the onion, garlic, and parsley, and mix everything together with the meat. Salt and pepper the mixture. Add the egg and stir well.

Put half a teaspoon of raw rice into each hollowed-out tomato. Then fill them all with the meat mixture. Put the stuffed tomatoes into an oiled baking pan or dish, put the lids (the slices you cut off the top) back on, and drizzle olive oil over all. Cook them for an hour or more, uncovered, in a medium oven. Baste them during the baking.