Another letter and a newspaper clipping from my year in Rouen as an English-language teaching assistant:

We've had another eventful period in our stay here in Rouen — starting two weeks ago, as you can see by the enclosed newspaper clipping. A student was arrested on January 27 for setting fires in various parts of the main building of the lycée. 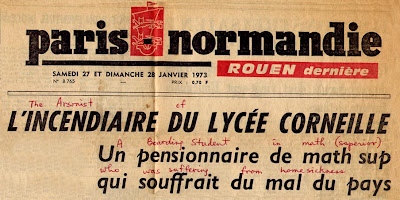 Headline in Rouen's daily newspaper, 27 January 1973
On the Tuesday night before, he had used kerosene to set the staff room on fire, and he had poured a trail of fuel oil down the two halls and into 26 separate rooms on the first floor. Luckily, the fire was seen and extinguished before it spread. 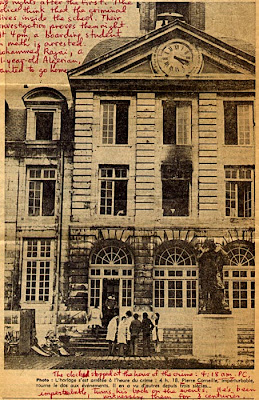 The lycée Corneille with traces of the second fire
Then on Thursday night he did the same thing on the second floor, burning out the principal's office. This time he had poured a trail of kerosene up the stairs and into his own dormitory on the third floor. Again the fire was put out before it had a chance to spread far. A lot of people could have been injured or killed otherwise.

Some details of the story
The student was homesick. He wanted to be able to tell his parents back in Algeria that there was a lot of trouble in the school and that it was dangerous for him to stay there, so that they would take him home...

I didn't live in the school, so I wasn't directly affected by this story. I didn't know the student who was so troubled. But the whole place was in an uproar over it for weeks, as you can imagine, and I learned a lot of French reading about the fires and the arrest and listening to students' and teachers' stories about it all.

In my letter to Ma, I concluded:

So there you have a picture of the front section of the lycée. Gray, cold, and old.
Posted by Ken Broadhurst at 08:45