I'm always surprised when I see old letters that I wrote or that friends wrote to me. They are long! We wrote a lot, and I guess without inexpensive telephone plans and without e-mail, snail-mail letters were our only way to communicate with friends and family. 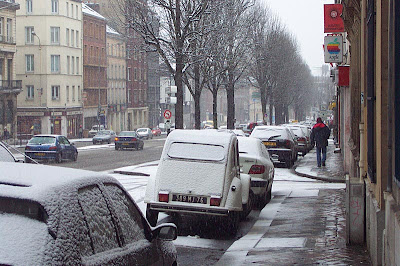 The boulevards of Rouen near where I lived
February 2003
Rouen is about 200 miles north of Saint-Aignan. The Rouen metro area has a population of about half a million. I've spent a lot of time there over the years (see this blog topic). My October 1972 letter continues:

Thursday
My cold is almost all well now. The weather is still beautiful, though a little chilly — 45º at night, 65º in the afternoon. No clouds, no rain for exactly two weeks now...

I started moving into my apartment right after I stopped writing on Tuesday, so I’ve been busy since then. Tuesday afternoon, Monsieur Beauvallet, who did most of the work in the apartment, told me that he had bought a stove and a refrigerator for the kitchen. So looking disappointed when he told me on Monday that I wouldn’t have a fridge worked. He got the gas hooked up last night, so I’m all set. I spent about $25 yesterday buying pots, pans, glasses, dishes, silverware, etc. 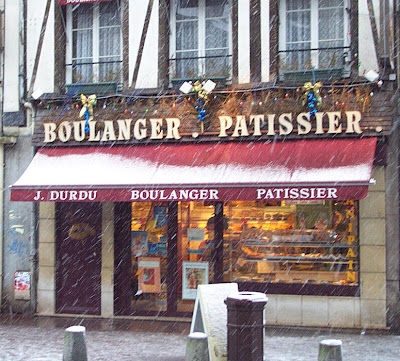 Shop on the Place du Vieux Marché, Rouen
February 2003
The story of the apartment is pretty complicated, but I think I’ve finally figured it out now. As I’ve said, Madame Beauvallet is a secretary at the lycée. Her husband is evidently a tile contractor. Because of her job, they have an apartment (at no charge) in the school, as do five or six of the officials. Her parents have this big old house (they are Monsieur and Madame Lesage). They rent four small apartments, all unfurnished except this one.

The Lesages are both over 70 years old and neither is really well. He is deaf and toothless, and she is arthritic. Besides Madame Beauvallet, who must be 35, they have two retarded sons, one 21 and the other 30. They are almost helpless, have to be dressed and fed, and can’t go out on their own. They live with the old people. I figure that the Beauvallets know that when the Lesages are gone, they’ll have to keep Madame Beauvallet’s two brothers so they’ll have to give up their apartment at the school and take the house. If they have four nice furnished apartments to rent out — and considering the lack of furnished apartments in Rouen — they will have a nice little monthly income to go with what they already have.

Monsieur Beauvallet keeps telling me that he thinks it is ridiculous the way people in France live without what we consider necessities — hot water, refrigerators, adequate heat, etc. Many still don’t have any plumbing, even in the cities. But old Monsieur Lesage is set in his ways and thinks people don’t need all these frills. Monsieur Beauvallet says he would have done a lot more to fix up the apartment, but his father-in-law was against it, and he’s the boss.

Two hours later
I just came back from taking a shower at the lycée and now I’m sitting in a laundromat while my clothes get washed. It’s a laundromat full of Speed Queen washers and dryers, all fitted out to take French francs instead of quarters and dimes. Talking about American products — the country is full of them, except for American cars and trucks. 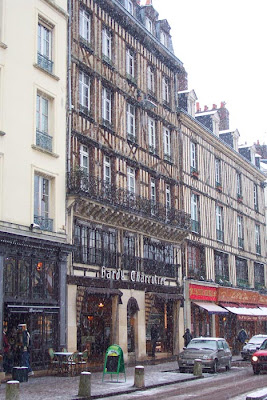 Place du Vieux Marché, Rouen
February 2003
Yesterday in a big grocery store I noticed that much of the rice is imported from the U.S. and is called “Carolina Rice.” They had Uncle Ben’s converted rice too. There was also a can of something called American Sauce for meat, poultry, and fish. No telling what’s in it! (After all, the French don’t eat French dressing. But French fries are the national dish.) Woolite is sold everywhere. I tried on a MacGregor sports jacket yesterday, but it was too expensive. Time, Newsweek, and Mad Magazine are sold in most newsstands. Coca-Cola is everywhere, Pepsi some places. Heinz ketchup too. There is a store called The English Shop that sells breakfast cereals — raisin bran, shredded wheat, etc. Rice Krispies and Kellogg’s Corn Flakes and Quaker Oats are in all the stores. So are Colgate-Palmolive products, and Ultra-Brite and Close-Up toothpaste.

But don’t think everything is American. Most people still shop in little stores, buying unpackaged French bread, fresh vegetables, and butchered, cut-to-order meat. Prices are about the same in America for most things... 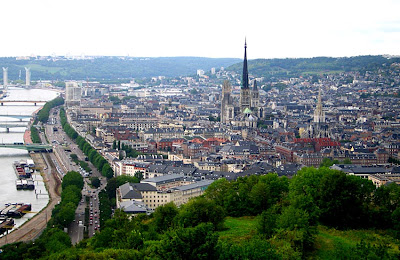 Rouen from the corniche
August 2006
It was natural to focus on American things at the beginning of my stay. Also, I was very interested in the Beauvallets and the Lesages as a family, although I never really got to know them. I think I was very curious about their circumstances, since I had never known a French family before, despite having spent six months in Aix-en-Provence as a student two years earlier.

Unfortunately, 35 years later, fewer and fewer French people buy their food in small shops. The supermarket, or hypermarket, is now ubiquitous. Small shopkeepers can't compete, and the ones that survive do so by turning toward the selling of luxury items rather than everyday products. Nowadays, everybody has a car and can go to the supermarkets. 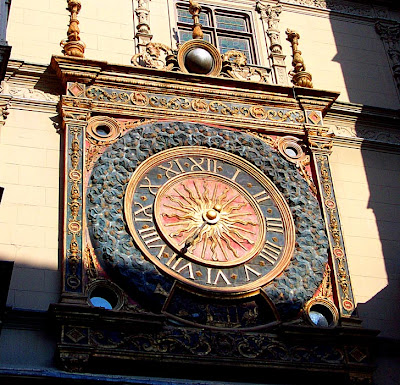 Le Gros Horloge — The Big Clock — in Rouen
June 2003
There are still two butcher shops in Saint-Aignan. For standard cuts of meat, their prices are about the same as the prices you see at the butcher counters in local supermarkets including Intermarché and SuperU. The quality is equivalent too — in other words, the supermarkets have butchers on staff and sell high-quality meats, cut to order. The big difference is that the supermarkets sell in volume and can run weekly specials that save consumers money.

Here's a link to part 3 of this topic about an old letter from Rouen.
Posted by Ken Broadhurst at 08:42