It seems like I don't have the flu. I don't know what is going on, and why I felt so terrible yesterday. This morning, tout va bien. 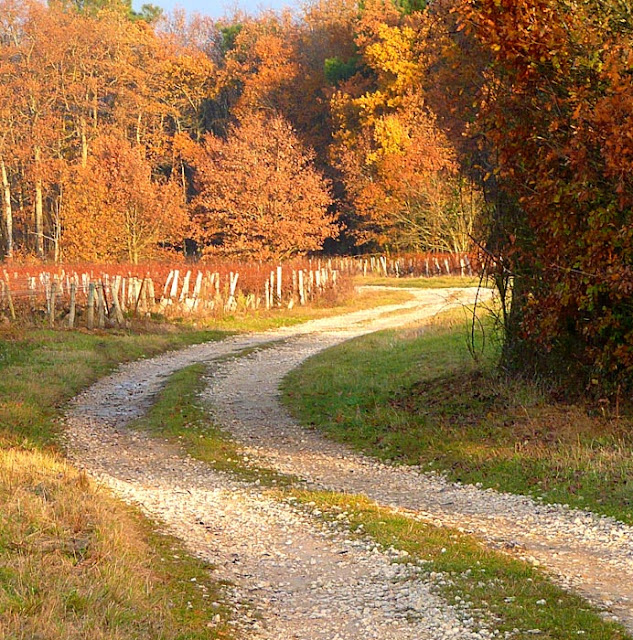 I'm "decorating" this post with some pictures I took
last Friday, when the sun was out over the vineyard.

As for the hibernation, I've decided just to let it run its course. I've always been somebody who got up early in the morning. When I used to teach, I would always ask for the 8:00 classes, because not only was I up and ready by that hour, but I felt better, and my teaching day was over early. I also enjoyed the people who chose to come to class at that early hour.

Now I find myself sleeping until 8:00 or 9:00 nearly every morning. As I've said, part of it is because it's so dark. The sun comes up at about 8:30. Besides, the bedroom shutters are closed, so it really is dark in there. 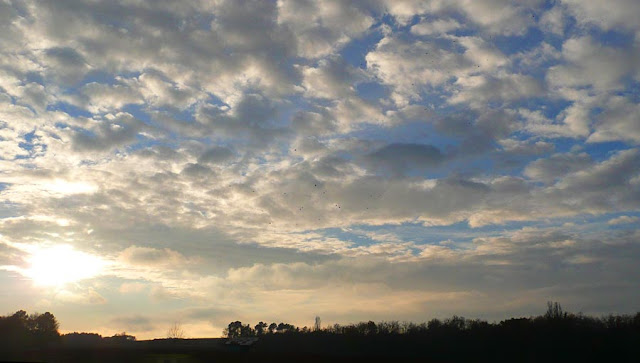 Yesterday, all the shutters were closed, all around the house. That's because we had a big windstorm in northern France. We must have had 40 mph winds with 50 mph gusts during the afternoon and evening. It was worse in Brittany and up on the Normandy coast. The TV news last night showed waves crashing on rocks and jetties and sea walls from the tip of Brittany up to Dieppe in Normandy. People were leaning into the strong wind and being pelted with raindrops.

Here at La Renaudière, when we have weather like yesterday's, we close all the shutters. Partly it's a precaution, but the closed shutters also help insulate the house and keep the rain off the windows. If a big tree branch does break off and go flying, it won't end up crashing through a window. 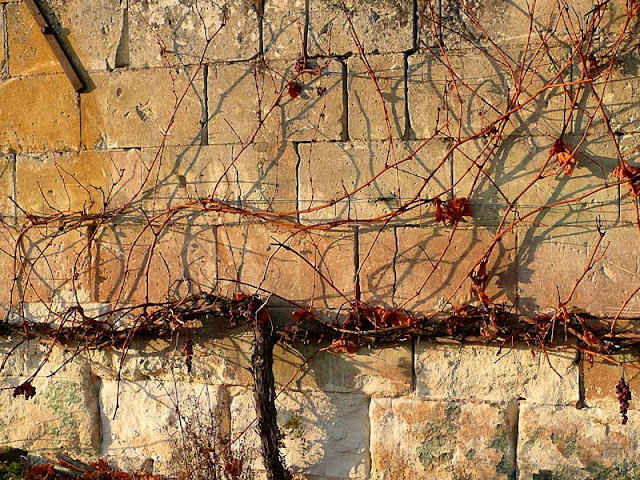 We had just over half an inch of rain (16 mm). That's not much, but everything was already very wet. This morning, the sun is out. The winds have died down, though I was vaguely aware of rain and some wind gusts early this morning, two or three hours before I actually sprang out ... er, hauled myself ... out of bed.

What's going on in France these days besides windstorms? Well, a lot of the news is about rising prices. And I've noticed higher prices at the supermarket compared to September, that's for sure. Milk, butter, chicken have all gone up, for example. 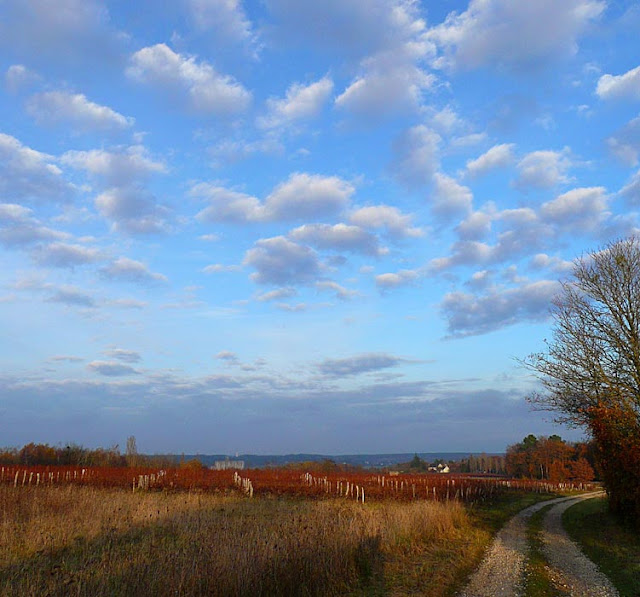 The hamlet called La Renaudière off in the distance

The Sarkozy/Fillon government has a plan to fight high prices. Fillon, the prime minister, announced last night that he was proposing legislation to let workers more easily put in overtime hours. "Work more to earn more" is the theme of this administration.

Of course, the Sarkozy people never point out that they can't force employers to let workers work overtime hours. Or that employers who ask their staff to work longer hours will end up hiring fewer new workers, so unemployment is bound to go up. That seems logical.

They make it sound like an employee who works the standard 35-hour week just has to tell his boss that he wants to work overtime and that will be that. I don't think it works that way, does it? 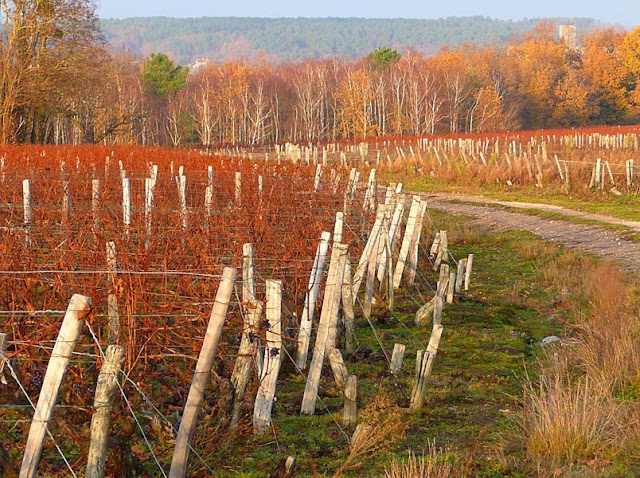 Here's what to do on a Sunday: take a walk
in a vineyard. Or a park. Wherever.

The other big thing is work on Sunday. Employees at an Ikea store near Paris were featured working a Sunday shift. They all said they were volunteers, and that Ikea employees who don't want to work on Sunday don't have to. That also doesn't sound realistic to me. If your boss wants you to work on Sunday, and you say you are against it as a principle, what do you think that does to the way you are viewed by your boss? And your career prospects? What if your boss decides he can't do without you on Sundays?

Sarkozy would like people to work all the time. That's my impression. What ever happened to all the leisure time that was promised to us in the 20th century? Is work the point of life? Do all the stores really need to be open on Sundays? And 365 days a year? I know they are in America, but is that the future for workers in all the countries in the world? I guess that for the forces of capitalism, work is the opiate of the masses.
Posted by Ken Broadhurst at 09:36