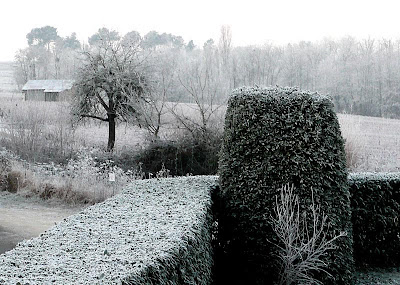 A frosty morning out back
Monday afternoon about 3:30, somebody rang the bell outside our front gate. I looked out and saw a red 2CV parked there with two men standing next to it. I didn't recognize them.

I went downstairs to see who it was. "It's because of your blog," the men said in French. "We are faithful readers and we wanted to meet you." I asked them if they spoke English and they said they could read just a little but they especially enjoyed the photos. 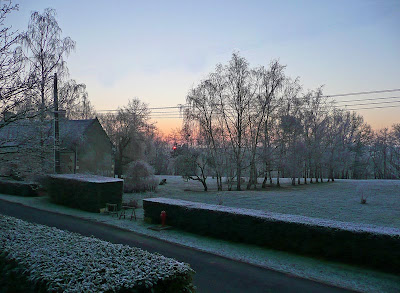 December sunrise
Because I was basically napping in front of a movie on television at that hour, I was a little groggy. I probably should have invited the guys in, but I didn't. I just stood out there and talked to them for a few minutes. 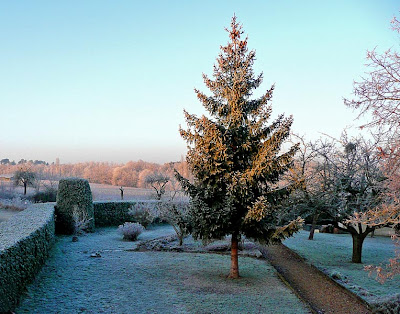 Sun! But cold!
One of them said he lived in Saint-Aignan, down by the river on the other side of town. He said I had actually taken a picture of his 2CV one day and posted it on the blog. It's here. When I took the picture, the car was parked on the main square in town, in front of a house that was then owned by an Englishman named Douglas. I told my visitor that I remembered that picture, and that I do know Douglas. 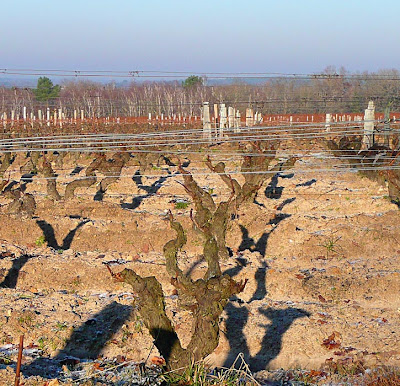 Vines and shadows
The other visitor was the first one's brother-in-law. He said he lives in Cannes but he's originally from Saint-Aignan and visits fairly regularly. His wife is the other man's sister, and he has a 2CV that he said I had photographed as well, but I can't find that picture. It's beige, he said.

I'm not sure how I feel about being discovered. I asked them how they located me, and they said that since I had given the street name and posted a picture of my house, it wasn't exactly difficult. I guess I didn't think there were actually any local readers of my blog. 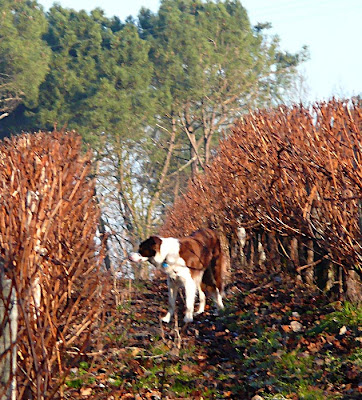 Callie in the vines
The two men stayed just five minutes. They are both about my age. One of them said I should stop by his house for a glass of wine one day during the holidays. "If the red 2CV is parked out front, that means I'm there," he said. I thought I understood where he said he lived but yesterday I was out and over that way and I'm not sure it's clear to me where it is.
Posted by Ken Broadhurst at 09:50