Yesterday we made our steak au poivre, a tradition for Walt's birthday. That's the only time we make steak au poivre during the year, and this year Walt decided to use poivre vert — green peppercorns — instead of crushed black peppercorns. A little bird told me Walt is going to do a post about it on his blog (I caught a glimpse of his screen as he was uploading photos). 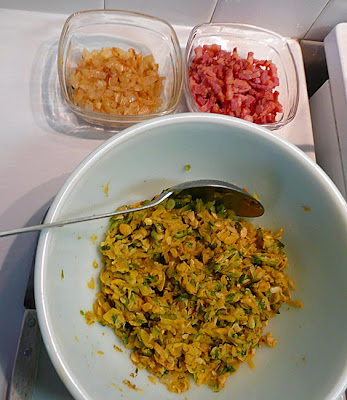 Recently, we had a zucchini quiche.
Grate and sauté a couple of courgettes (green and yellow in this case),
and cook some chopped onion and smoked pork lardons too.
Today I'm making pumpkin soup, using a pumpkin we grew in our back yard patch last summer. In fact, Walt used part of the pumpkin flesh yesterday to make a really good pumpkin pie for our desserts over the next couple of days. 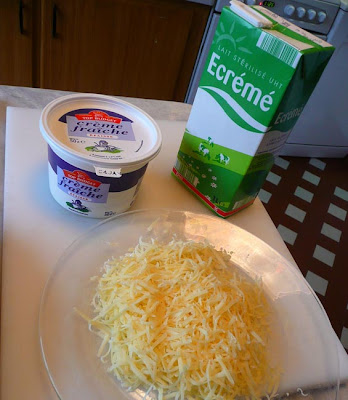 Get the cream, milk, and grated cheese ready.
Use skim milk and cream combined, or use whole milk.
The pumpkin soup I have in mind is one that I had in a restaurant somewhere out in the French countryside way back, I believe, in the 1970s or early 1980s. Or maybe it was in the late 1980s, on a trip Walt and I took back then. I can't remember where I was or who I was with, but I remember a soup with big thin slices of onion and pumpkin flesh in it. The base was, I believe, chicken stock and milk. I'm going to add some garlic. Most of the pumpkin or butternut squash soup recipes and soups you see these days call for pureeing the pumpkin, but that's not what I want. 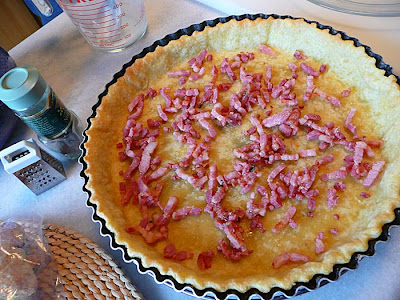 Pre-bake the pie shell and scatter the lardons on the bottom.
Don't forget the nutmeg for the filling, along with some black pepper.
Lardons = U.S. bacon, by the way.
So that's what I'm going to do today. I saved out some pumpkin flesh and then we roasted the rest of the pumpkin, scaped out the cooked pulp, and froze it in plastic containers to use later. I'm going to make chicken stock this morning and sauté some onion and garlic slices in butter. Then I'll pour on the stock, add a bay leaf and maybe some other herbs, stir in some whole milk, and let that cook until the onions are limp and tender. At that point I'll put in the pumpkin slices and maybe one thin-sliced baking potato. As soon as the pumpkin and potato slices are cooked, we'll eat it.

I hope it's as good as the soup I have remembered all these years. 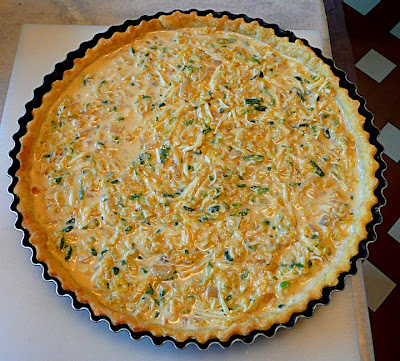 Make the filling and pour it into the pie shell.
Mix together the milk, cream, eggs, cheese, courgettes, and onions.
For Christmas, we are going to make a cheese fondue, which is something we do every Christmas Eve. Then on Tuesday we'll have a roasted poularde, which is a specially fattened immature hen that has not started laying. It's the hen equivalent of a capon, which is a young rooster that is castrated and fattened. The poularde weighs in at just under two kilograms, or more than four pounds. That should be enough for the two of us, with some good leftovers. 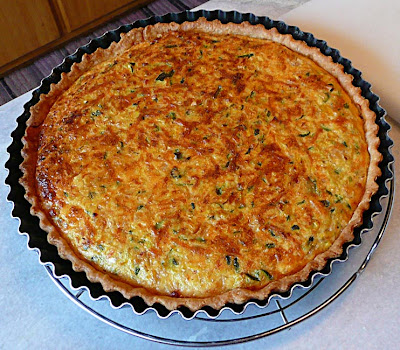 The finished quiche.
Nice for lunch with a green salad.
With the poularde we'll have a cornbread stuffing, some collard greens, and mashed potatoes. I grew the collards in my back yard garden and have them in the freezer. We have to get a pan of cornbread made tomorrow or Monday. I just happen to have brought back a couple of bags of cornmeal from my trip to North Carolina in November.

Oh, and for New Year's Eve, it'll be oysters and champagne (or Vouvray). And for New Year's Day a sort of cassoulet made with lamb, duck, Toulouse sausages, and (for good luck in 2008) black-eyed peas.

Happy Holidays and happy eating to all...
Posted by Ken Broadhurst at 07:31