Everything is glazed over today, including the road out front and all the plants outside. The temperature was about 30ºF or -1ºC this morning. But yesterday we hit +3ºC or even higher in the afternoon, and it rained. It was raining when I went to bed at 10:30 last night. So that little bit of moisture froze over before morning. And the haze is our morning fog, under perfectly clear skies. By now the sun is shining brightly, but it was icy when I went out with Callie.

All those price increases for basic food items represent inflation on the order of 15% to 25% or even higher. And don't even mention oil, of course. Four years ago, we paid 45 cents a liter for fuel oil and 85 cents a liter for diesel fuel for the car. Now those have jumped to 85 cents and €1.16 respectively. But we all know oil has gone up.

I attribute the price increases to energy costs and to the lousy summer we had last year in Western Europe. It costs more and more to feed livestock and poultry because grain prices have shot up. I guess it was inevitable, anyway, given how all our gardens failed last summer. It's amazing that I haven't noticed bigger increases in the prices of fresh produce, but I haven't. They are higher, but they vary greatly from market to market. I saw sweet potatoes for €2.99 a kilo at Intermarché but at €1.99 at SuperU. Same for broccoli.

Speaking of which, at the Ed supermarket yesterday, where the parking lot was iced over like a skating rink, most of the the lettuce looked pretty pitiful. I would normally buy what is called a laitue (butter or Boston lettuce) or a batavia (grean leaf lettuce) and eat those with a vinaigrette. Given the sub-freezing weather we've had for the past two weeks or so, I imagine most of the local lettuce crop is frozen in the fields. There are big truck farms along the Cher River on the east side of Tours, and I imagine a lot of our lettuce comes from there. 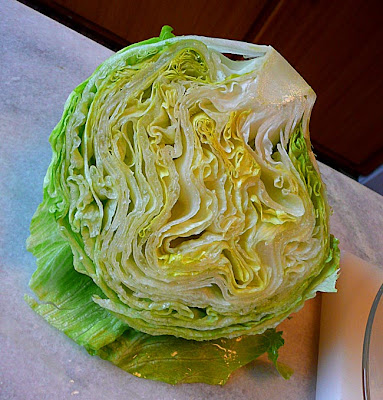 Iceberg lettuce on an icy morning
So the normal lettuces looked pretty sad — wilted and frostbitten. Then I noticed a variety of lettuce you don't see here very often: iceberg. The heads of iceberg (labeled Eisberg) lettuce looked fresh and green. They came from Spain, the label said. What the heck, I thought. I bought one. Une fois n'est pas coutume. — it would make for a nice change.

I also got some eggs (those have gone up in price by 25% to 33% too, by the way). When I got everything home, I opened the carton and found two broken eggs. What a pain! So I took the one that was really broken, quickly separated the white from the yolk, and with the yolk I made mayonnaise. I put the other cracked egg in a pot of water and hard-boiled it.

Mayonnaise is easy to make — it's an egg yolk, a few drops of vinegar, and a teaspoon of Dijon mustard whipped together with salt and pepper, and then about ¾ of a cup of vegetable oil slowly beaten into that. It emulsifies. It always works fine for me. 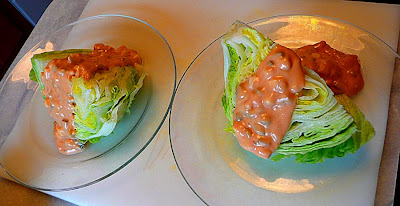 Does this look like something out of the 1960s or not?
What I had in mind was an American style salad dressing for that iceberg lettuce. Thousand Island! Do people still eat that in the U.S.? It doesn't exist here. Take a cup or more of mayonnaise, mix in a few tablespoons of tomato ketchup, and then add chopped shallot, pickles, capers, garlic, and parsley. Plus the chopped hard-boiled egg. You have made Thousand Island Dressing. Serve it over a wedge of iceberg lettuce. Delicious.

With that, we had the pumpkins soup I described yesterday. I made a couple of quarts of chicken broth (poaching chicken legs to be processed into food for the dog) with a few carrots and some bay leaves for flavor. Then I "sweated" some onions and garlic in butter and put them into the finished broth to cook for an hour or so. At the end, I added some cream and skim milk (whole milk would have been good but I didn't have any), some dried oregano, tarragon, and thyme, and one big baking potato plus a good amount of pumpkin, all sliced up. 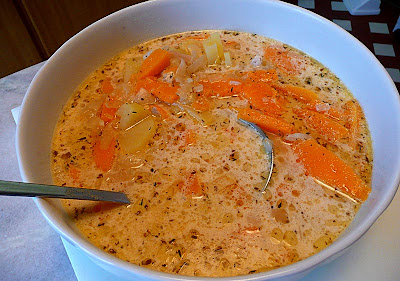 Pumpkin-potato soup as I remembered it
The potato and pumpkin didn't take longer than 15 minutes to cook. The vegetable pieces started falling apart in the soup, including the onions rings that had cooked for a long time and really sweetened up. It was hot, tasty, nourishing, and good. And it was a pretty good version of the pumpkin soup I remembered eating in some little restaurant way out in some rural French province so many years ago.
Posted by Ken Broadhurst at 09:15