Before I talk about food, answering a question posed by Susan in a comment, I want to say this about the bidet: Claude said she had the bidet removed from her salle de bains because, basically, it was a waste of space. I can understand that.

Ours is too, in practical terms. It's just another bathroom fixture you have to wipe and scrub down to keep it clean, and the only thing it ever gets used for is washing out a pair of socks or drawers. (TMI?) But our bathroom is big, so we don't particularly need the space the bidet takes up.

Our plumber, Monsieur Rougemont, advised us to have it taken out. He also advised us to have the bathtub taken out when we had a nice new shower stall put in. We never officially use the bathtub either, though it is a good place to set big potted plants when you want to wash the dust off their leaves. Sometimes the plants stand there in the bathtub for days or weeks on end. They get good afternoon light through the bathroom window, and they are not in anyone's way. 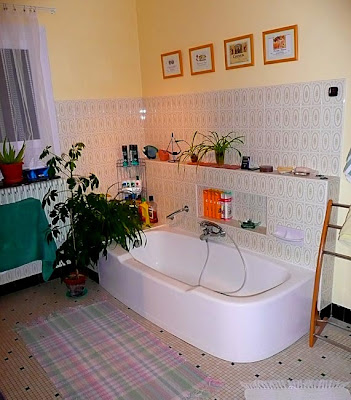 Rip this out?
Now I think Rougemont is a good man, and I know from experience that he is an excellent plumber. But taking out the bidet and the bathtub would be money in his pocket and money out of mine. In California, real estate people told us it would be really hard to sell a house that didn't have a bathtub in at least one bathroom. I don't know if that applies here in France.

I think French people (plumbers, anyway) might have gotten over-enthusiastic in the modernization of the country's bathrooms. Back when, it was a luxury to have a bathtub. As Marie-Antoinette might have said, "The people don't have bathtubs? Let them take showers!"

As for the bidet, we are keeping it for old times' sake. It's one more thing that reminds us every day that we really are in France. I've seen bidets in American bathrooms, but there aren't many (unless they are putting them in all the McMansions being built pretty much everywhere now).

By the way, it was five years ago yesterday that we first laid eyes on the house we live in now. We knew it would be a good house for us from the moment we saw it. It is. Five years!

Oh, food. Well, what was for lunch yesterday was pizza. Walt made the crust using Evelyn's bread dough recipe, which includes a little bit of honey and a little bit of sugar along with flour, yeast, salt, and a little olive oil. He said the dough was just beautiful, and he let it rise overnight in the refrigerator before making the pizza the next day. 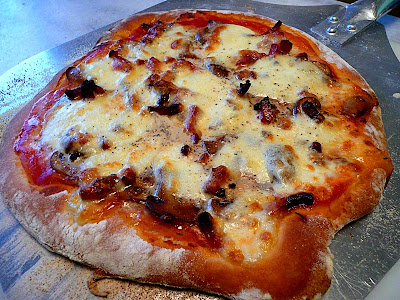 Pizza pie, 10 December 2007
I have to say it was very good pizza. The toppings were tomato puree, lardons, mushrooms, a sprinkle of dried thyme, and un bon peu de mozzarella cheese. The crust was puffy, light, and crispy. Another success.

Did I tell you about the quince trees? Our neighbors had — yes, had — three of them, and I made many quarts of delicious quince jelly two, three, and even four years ago. Most of that jelly is gone now, and there may well be no more.

One of the neighbors' quince trees just up and died. Another was looking puny, so the neighbors had it cut down. They kept, however, the big tree that produced the most fruit. 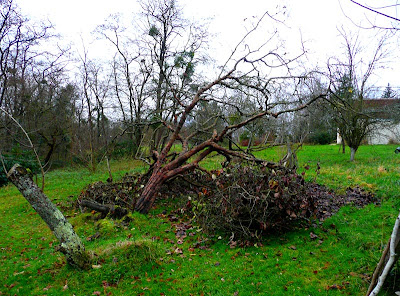 Le défunt cognassier de chez nos voisins
Now that one has expired. It blew over in a gust of wind. To my untrained eye, it looks to have had it. There was some talk of trying to save it, but I've seen no follow-through.