Sometimes I stop myself and ask, "Why exactly did you start this blog?"

And guess what — I do remember. Back when I lived in cities in France — Aix-en-Provence, Rouen, Grenoble, Metz, and, mostly, Paris — I made my living working as a teacher and, incidentally, a supervisor of American study-abroad programs. 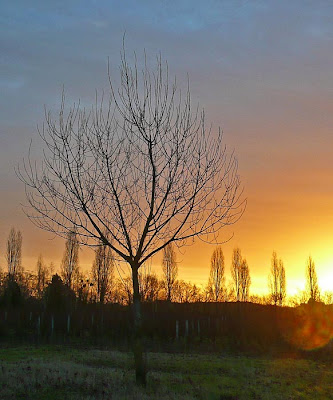 Winter sunrise, 08 December 2007
I taught English in France, but in the U.S. and even once or twice in France, I taught French to American students. Grammar, vocabulary, verb conjugations, and pronunciation. Or syntax, semantics, morphology, and phonology, if you prefer. And also culture. As we said back then, both Culture (high-brow) and culture (everyday life).

As a very young man, I ended up living in France for seven years between 1970 and 1982. That means I also spent five years in the U.S. during that period, most of them in graduate school in Illinois preparing advanced degrees in French literature and linguistics, working at the headquarters of the national association of French teachers, and teaching French to university students. 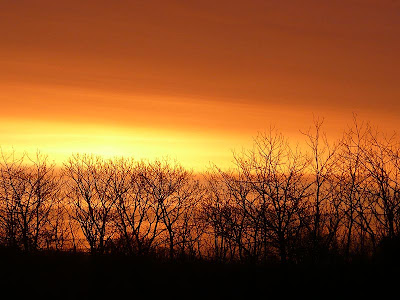 New day dawning
Sitting out on the prairie in Illinois, then, back in the late 1970s, I would sometimes dream of a life in which I lived in France permanently — ideally in Paris — and in which I would supplement whatever income I had by being being a kind of "foreign correspondent" for American teachers and students of French.

I thought I might write and somehow distribute a weekly or even daily column or article describing current events in France, cultural differences between France and America, and interesting language tidbits. Back then, the time lag between events and trends in France and the time they became known in America seemed years long. Students needed the motivation of fresh news and information from France. That was before personal computers and the World Wide Web existed. In fact, it was a luxury just to have a telephone in France back then, and I lived without one for years. 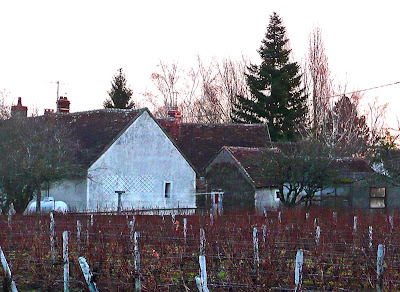 The cluster of old houses that is the core of the hamlet
called La Renaudière, near Saint-Aignan
I did end up living in Paris for three years at the end of the 1970s and beginning of the 1980s, but I never became that foreign correspondent. Distribution of the information was the show-stopper. I had to move back to the U.S., to Washington DC, to accomplish my "journalism" goal, and then I was writing about American culture for an audience of French-speaking Africans. Unfortunately, I had never set foot in Africa, and the focus on America wasn't what I wanted. Not only that, but I had to adhere to the Republican party line, since I worked for the federal government while Ronald Reagan was president and right-wing ideology was king. 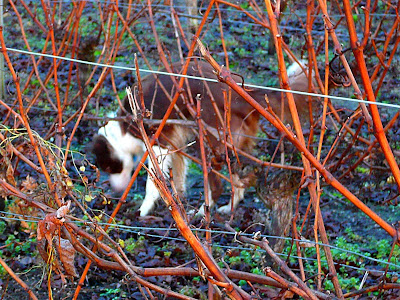 Callie among the vines
Two years ago, Walt and I had been living in Saint-Aignan for two years already. When he discovered and told me about blogging, I set up Living the Life in Saint-Aignan immediately. I think that old idea of sending real-time snippets of French life, language, and culture back to the U.S. was still in the back of my mind. Of course, the audience I had in mind for the blog was old friends in California and other places in the U.S., including my family. But I figured other people would soon discover the blog — and many have. I'm up to close to 50,000 visits in a little less than two years of posting.

Problem is, I don't live in a city any more. I live out in the middle of the country. I don't interact with very many French people. I'm way outside the mainstream in many ways. I don't work for a living, so I don't have work events and interactions to write about. I don't travel much.

The people I do interact with here in Saint-Aignan with are friends and acquaintances who might know about the blog, and I don't want to violate their privacy by talking about the details of their lives and the quirks of their personalities on a blog. 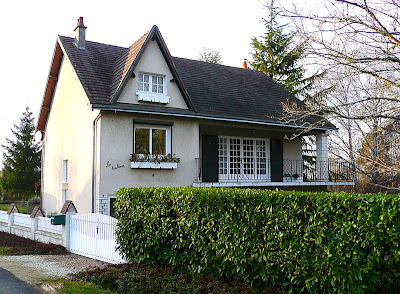 A little house at La Renaudière
So here I am, executing on an old plan and wondering why. That's all. And here are some more nature shots of my days in the vineyard. Can you stand it?

What made me think of all this, in part, was a telephone conversation last night with our old friend Cheryl in California. I was describing some recent people and events to her, and I realized once again that many of the most interesting people and events all around me are ones that I just can't feel comfortable about describing on the blog. 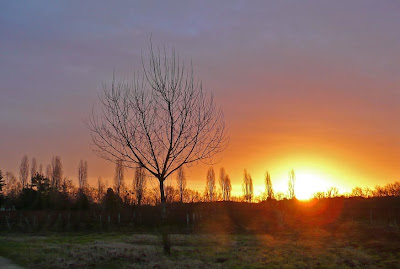 One more picture of that sunrise
I'm still aware of the huge differences between life and people in France compared to life and people in the U.S. But how to describe them? I guess if you could easily explain such things, there wouldn't be much point in living through them.
Posted by Ken Broadhurst at 09:14