Callie weighs 14 kg now — 31 lbs. That's not as big as Collette was — that dog's adult weight varied from 16 to 18 kg — but Callie is not yet 10 moths old. I assume she will put on another three or four kilos next year.

I've been back in France for nearly three weeks now, after an absence of just more than three weeks. Callie really tested me when I got back. She must have missed me. And she obviously didn't enjoy the all-day ride in the car with Walt to pick me up at the airport when I got back. That night, she peed and pooped on the kitchen floor. My first clue... 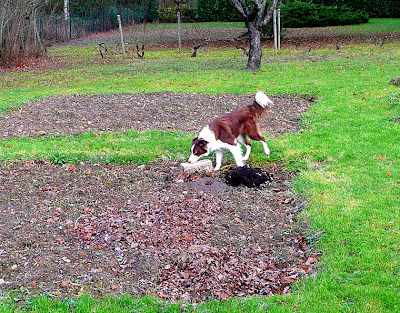 Callie headed for the loose soil of the garden plots
For days, the dog was willful and uncooperative. She played rough, biting me more than before, and refused to obey any commands. She did all the things we've tried to get her to stop doing: jumping up on the kitchen counters, taking food out of the garbage can, eating charcoal out of the fireplace, splashing in cold mud puddles outdoors. For me, the last straw was when she rolled in something putrid on one morning's walk.

That was the day we had it out. After another bath, she had breakfast. Then she decided that a rug I had just put back down in the living room, after rescuing it from her teeth when she was just a puppy, would make a good plaything. She had the rug all bunched up in a ball, and I thought she was chewing holes in it (she wasn't, it turned out). 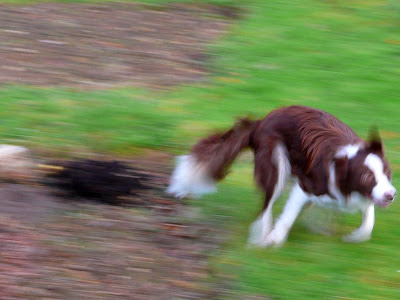 Her reaction when I said No, Get Out of There
I talked to her very sternly that morning — no, I'll admit it, I screamed at her. I threatened her that I would take her to the pound (as if she understood!), and I rued the day she first darkened our door last May. I needed a bon coup de gueule — a loud rant — and I needed to reassert my leadership, my rank in the pack, in a way she wouldn't forget. It was deafeningly vocal and it seems to have worked.

Callie can still be willful, of course. Yesterday afternoon we were out in the back yard. We had come in from a walk in the lower part of the vineyard, not far from the house. She was soaking wet, because the ground is squishy wet (it's supposed to rain again this afternoon).

The dog headed straight for the tilled-up garden plots. I was trying to play frisbee with her, but the loose soil of the garden was more attractive. She was going to roll or dig, or both. I called her and said No! Get Away From There! She heard me. She looked at me defiantly and took off running. In circles. Playing. She knew what she was doing.

Why did I take Callie to walk in the lower vineyard and not out on the gravel road that runs through the upper vineyard? Well, it's because of That Woman and Her Dog Lili. I don't like seeing them any more than Walt does, and they seem to be out there every afternoon. The nerve of them, invading "our" vineyard the way they've done. I wish they would move back to Paris (no, it's not the same people). 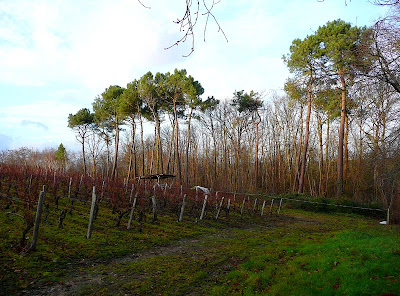 The lower vineyard, site of our afternoon exile
First of all, Callie and Lili take off together and disappear from view for long minutes. I stand around calling Callie, but she doesn't come back. I'm afraid she'll end up out on the paved road, where The Woman and Lili live, and in front of a car. And when she finally does feel like coming back, she's a muddy, tangled mess. She has to have a full bath when we get home, and giving her a full bath every day is not my idea of Quality Time spent with her.

Besides, the woman who walks with Lili is so boring. We have nothing to say to each other, and we always end up standing around or walking together for a good part of the time I'm outdoors. That also is not my idea of Quality Time in the Vineyard. I'd rather be walking briskly, for the exercise, or taking pictures. Thinking my own thoughts. Keeping tabs on Callie's activities.

So now I avoid the main part of the vineyard in the afternoon. Callie and I still go out there in the morning. In fact, Callie is standing here vocalizing her desire to go walking right now. Now's the time...
Posted by Ken Broadhurst at 08:00