Here's another page from the Centre E. Leclerc's latest advertising brochure. It's for cheese(s), but can you tell what all these cheeses have in common? 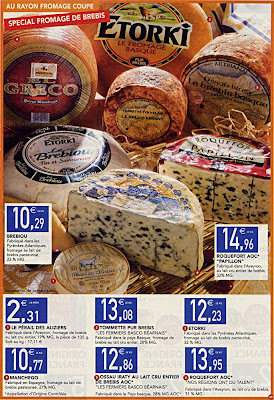 It turns out all these cheeses are made with ewe's milk. The ewe is the female sheep, like the cow is the female bovine. So not only do we eat lamb, but we eat cheese made from the lamb's mother's milk. Did you know that Roquefort cheese was made from ewe's milk?

Another thing these cheeses have in common is that they are all made in southwestern France or, in at least one case, northeastern Spain. A couple are from the Aveyron region, including Roquefort. The others are made in Basque country, which the bottom left corner of France when you look at the map. 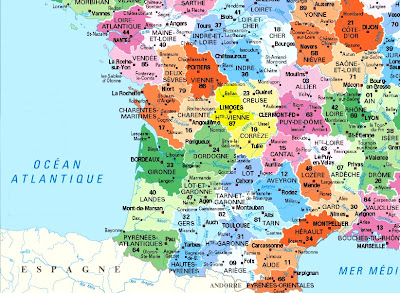 Southwestern France. French Basque country is the basically
the Pyrénées Atlantiques, the green area at the bottom left
of the map, on the border with Spain and south of Bordeaux.
The Averyon is a bright blue area just north and east of Toulouse.
The French word for ewe is brebis (bruh-BEE). If it's in the feminin (la brebis), it means the animal itself. If it's in the masculin, le brebis, it means the cheese (le fromage de brebis ;c'est du brebis). That's because the word fromage is masculin.