Our new autoroute, the A85

December 18 saw the inauguration of the new autoroute that links the town of Vierzon, 35 miles east of Saint-Aignan in the Berry, to the city of Angers 100 miles down the Loire towards the Atlantic Ocean in the old province of Anjou.

A lot of people think this is good news. I'm not sure I do. Sign me "Grumpy Old Geezer." 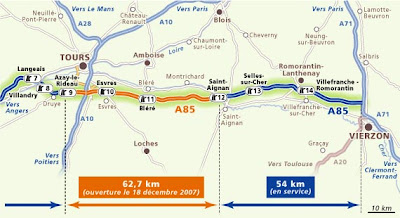 Now you can drive fast fast fast on the A85 from Langeais to
Tours to Saint-Aignan to Romorantin and to Vierzon. Don't blink.
An autoroute is what is variously called an expressway or freeway or superhighway in the U.S. It's the French equivalent of a U.S. interstate highway, except that autoroutes in France are mostly toll roads. 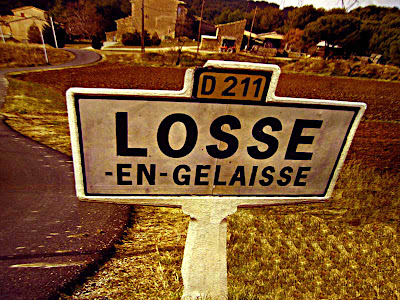 A vision of the Cher Valley's future?
The autoroute is a much faster way to get to your destination. On a good day, we can get to Paris by autoroute in about 2½ hours. If you don't take the autoroute, you can count on a 4-hour drive (or longer, if there's traffic getting into the city). The speed limit on the autoroute is 80 mph, while on other roads it is 55 mph. (That's 130 kph vs. 90 kph.)

But you really pay for the time you save. The toll one-way from Saint-Aignan to Paris is about €20, or $30. That's just the toll. Fuel, even in a little car like ours, will cost you another $35 each way. So the round trip to Paris costs at least $125. It's cheaper to take the train, even if you have a little car with a diesel engine that gets very good mileage. Diesel fuel in France is cheaper than gasoline. Plan accordingly. 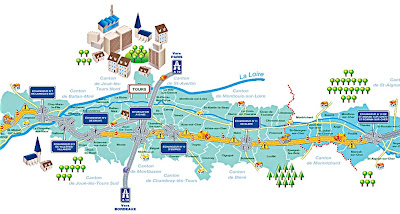 A cute graphic of the new section of our east-west autoroute, the A85.
It takes longer, but it's a lot less expensive to drive the little roads. At 55 mph, the car uses a lot less fuel, and there are no tolls to pay. And there are pretty landscapes, villages, châteaux, and churches to see. The autoroute doesn't stop anybody from choosing to drive the little roads, I guess, but time is money.

With the price of oil, gasoline, and diesel fuel skyrocketing, and at a time when pollution from the internal combustion engine is causing radical, maybe catastrophic changes in the Earth's climate, doesn't it seem short-sighted for our countries to continue building new roads, especially high-speed expressways that encourage people to drive more and faster? 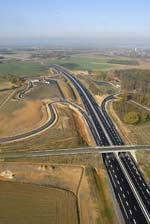 The A85 autoroute from Vierzon to Angers has been in the planning for 30 years. The section from Saint-Aignan east to Vierzon was opened to traffic two or three years ago, since our move to the area. The section from Angers to Langeais, on the other side of Tours, has been open for a few years as well. The part that opened about 10 days ago is the link from Saint-Aignan to Langeais, passing by Bléré, Loches, and Azay-le-Rideau in the southern outskirts of Tours.

One article in the local newspaper said that Saint-Aignan is now only 25 minutes from Tours instead of the 55 minutes the drive on older roads takes. The toll on that 35-mile, 25-minute section of autoroute is €5.00 each way. $7.50! And in fact, in several places, sections of the new road are just one lane in each direction, which was a way to hold down building costs. Maybe it means they don't think there will be all that much traffic on the A85. That's a nice thought.

Even so, they ripped out a lot of vineyards to make way for the new highway. Cars and trucks replace rows of vines. Do you think we might end up making ethanol out of grapes? If so, that was a bad move. 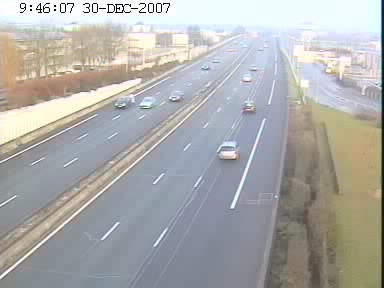 Beautiful downtown Tours — the view from the autoroute
Who will benefit most from having a high-speed highway from Vierzon to Angers? Tourists, I guess, and the Loire Valley gets a lot of them. They won't be sightseeing along the way, however. Truckers, certainly — when the last little section of autoroute around Angers is completed, there will be a complete east-west autoroute link all the way from the big city of Lyon (and points south, including Marseille and Nice) to the other big city of Nantes (and points west in Brittany). Cross-country shipping by tractor-trailer rig will be speedier.

Historically in France, all roads lead to Paris. In the past, if you wanted to go by train or by autoroute from Lyon or Marseille down south to Nantes out west, you drove north to Paris and then back southwest to Nantes. The fastest route was not the most direct. The building of east-west autoroutes like the A85 is seen in France as a great innovation. 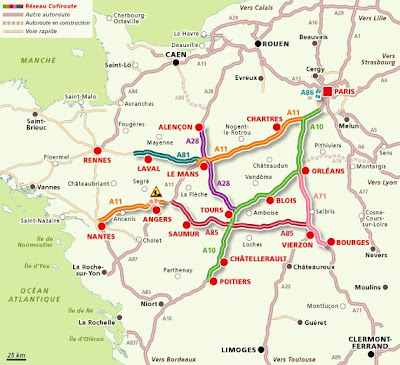 The network of autoroutes in northwest France.
Tours and the A85 (dark red) are in the middle of the map.
The other people who will likely benefit most from the Saint-Aignan-to-Tours autoroute are commuters. Which means that Saint-Aignan will probably start evolving into a bedroom community for people who make their living in the big city to the west. Tours has a population of about 300,000, whereas Saint-Aignan is 4,000.

A lot of new houses are being built around Saint-Aignan, though nothing yet on the scale of the sprawling subdivisions of McMansions that you see in the States. A newspaper article said builders are building new houses but there aren't yet many buyers. The Cher Valley and Saint-Aignan haven't yet been discovered, I guess. That's something to look forward to.

Thanks to http://www.cofiroute.fr/ for
most of the graphics in this topic.
Posted by Ken Broadhurst at 09:09