A quick topic today. I said yesterday that we were having steak with stewed onions (confit d'oignons) and green beans for lunch. 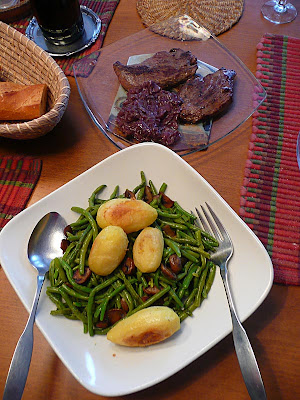 The steak is macreuse, which resembles flank or skirt steak. The onions cooked for about three hours on low heat, with some red wine, a bay leaf, and some dried thyme. Salt and pepper of course. They are the purplish mass on the platter with the two steaks, which were cooked medium-rare in a hot skillet.

The beans were frozen ones, and they were beautiful. I cooked them in boiling salted water. When they were done, I sauteed some mushrooms in butter and tossed the beans in with them. Meanwhile, I had already cooked a few potatoes in the boiling water, and then I just put them in a low oven to continue cooking and to brown a little bit while I cooked the steak and beans on top of the stove.

Much ado about nothing, really, but we don't eat beefsteak that often and this was really good. It reminded me of food you would get in a Paris café on a cold winter's day. With it we had some good Cabernet Franc red wine from the co-op (disambiguating the spelling, Claude!) in Saint-Romain. And some bread. It turned out to be a very typical French meal, I thought. One of the great pleasures of living in France is the food.
Posted by Ken Broadhurst at 11:13