Yesterday morning I headed out with the dog at about 8:00 in the morning. That's before sunrise, but it's light enough that I'm not afraid of losing sight of Callie, who likes to run through all the rows of vines and doesn't always stay close.

I had looked outside and it was gray and gloomy. It had rained, but the rain had stopped, at least temporarily. I was really surprised to see a beautiful sunrise just a few minutes later. 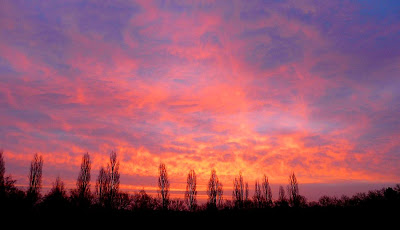 Sunrise at La Renaudière, 06 December 2007
The sky was red, as you can see (good thing there aren't many sailors around here), and the red light was reflecting off the trimmed vine branches, which already have kind of a reddish hue. 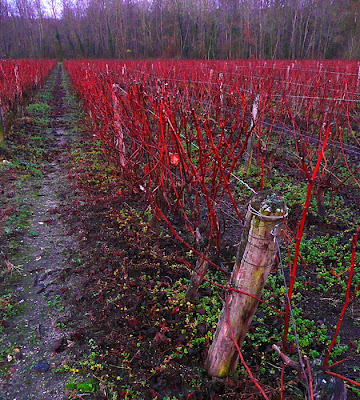 The Renaudie vineyards under a red sunrise
The whole red sunrise lasted less than 5 minutes. I walked a few more steps out into the vineyard and everything suddenly turned gray again. New rainclouds were moving in. There were just a few breaks in the clouds during the morning hours, but by noon it had started raining. 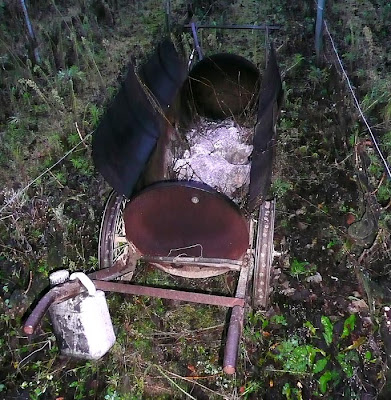 These are the contraptions that the vineyard workers use
to burn clippings as they prune the vines this time of year.
The weather turned stormy yesterday afternoon but it's not cold at all. The low this morning was 12ºC/55ºF. The low! This weather front has come in off the warm waters of the Gulf Stream. The wind has been blustery, and raindrops pelt the windows and drip down. It's dark, even during daylight hours. December! What do you expect? 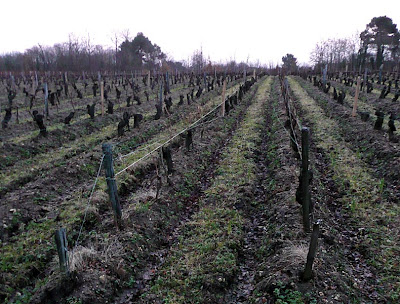 Minutes after that red sunrise began,
the landscape looked like this again.
Two weeks from today we will hit the low point as far as hours of daylight go. It will officially be winter then, but the days will start lengthening. Last year it was really cold at Christmas. Maybe it will snow this year.
Posted by Ken Broadhurst at 08:13