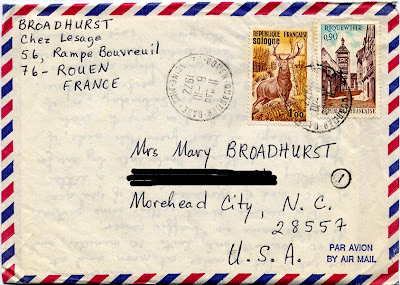 Postmarked Rouen, 06 october 1972
I got moved into the little apartment near the train station in October 1972, after living for two or three weeks in a tiny room up in the attic at the Lycée Corneille, which was a boarding school.

Excerpt of the letter, written longhand
I had left Illinois for France with about $700 in my pocket, and that was all I had in the world at that point (besides my family and a sense of adventure, I guess — not to mention a job in Rouen). I got the $700 by selling my 1966 Ford Fairlane when I left for France. 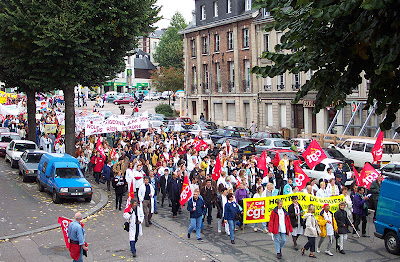 On the boulevards of Rouen
September 2001
The letter continues:

Since I have cooking facilities now, I’ll start eating at home and saving some money. I have a little more than $500 left, and everything except groceries is paid for October. I’ll get paid my first $250 by the school around November 1. Rent is $70 now, and will go up to $80 when they get the hot water and radiators installed. That includes everything. I didn’t have to sign a lease or pay a damage deposit, so all is well.

So I’ll survive, but I won’t be able to travel much. It is just as well. I haven’t been to Le Havre yet — I have a couple of American friends working in schools up there, so I will go sometime. I’ve heard that the whole downtown is new. It was all destroyed in the war. I can imagine what it looks like, because a good part of Rouen was also destroyed and rebuilt too. 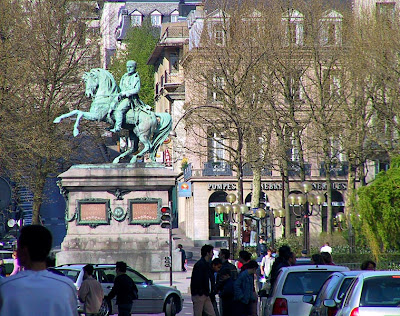 Street scene in Rouen near the Lycée Corneille
April 2002
Mostly it’s the waterfront, since there is a port facility here that serves ocean-going ships. All the area within two blocks of the river has been rebuilt since the war. Other parts of the city, right next to the new, are made up partly of buildings 300 to 500 years old. Joan of Arc was burned at the stake in the old marketplace where I go to get groceries. That was 540 years ago, and Rouen was already a big city then.

Here is a link to part 4 of this topic about an old letter from Rouen.
Posted by Ken Broadhurst at 09:46