Monday and Wednesday were rainy, but Tuesday afternoon the sun came out for a few hours. It was about 2:30 when I looked out the back window and saw the Parisians. 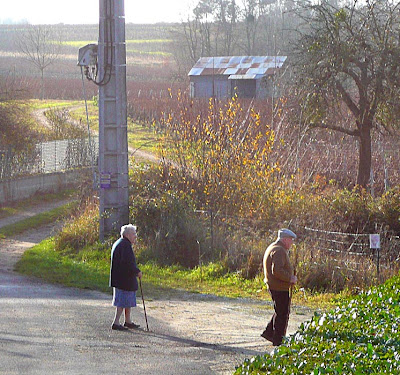 Our neighbors the Parisians
You don't see them very often. They live three houses down from us, on the same side of the road. They have a nice, well-maintained house, similar to ours. I don't think they have a car. But they have frequent visitors, judging from the cars parked outside on the road; I assume they are health-care people and house cleaning staff of one sort or another.

I call them « les Parisiens » because that's how another neighbor referred to them one day. I wonder how long they've lived at La Renaudière. Longer than we have, I know that, and that'll soon be five years. 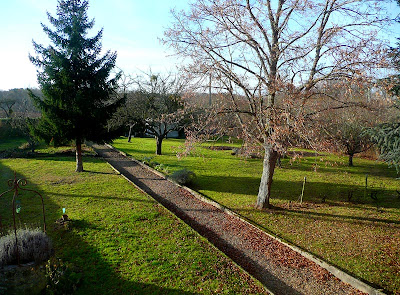 For the record, here's how the back garden looks these days.
I've talked to M. le Parisien only once, and never to Madame. It was the day our old dog Collette chased le chat des Parisiens into the bushes across the road from their house. "Your dog chased my cat," M. le Parisien said to me, more as an observation than a reproach.

"The dog is pretty old," I told him, "and at the age of 12 she won't be able to catch the cat anyway." M. le Parisien shrugged his shoulders and turned away to go back into his house. He had been out checking his mailbox.

When we see the Parisians, we always say « Bonjour ! » but that's as far as it goes.
Posted by Ken Broadhurst at 07:43