Here in Saint-Aignan in 2007, it is very cold these days. The sun shines brightly for the few short hours of daylight we get, but the temperature in the morning is in the mid-20s F (i.e. close to -5ºC) with afternoon highs in the low 30s (around 0ºC). The house is chilly even with the heat on. We spend afternoons and evenings sitting around a hot fire in the wood stove.

The weatherman on France 2 television just said temperatures are about 12ºC below seasonal averages. That's more than 20ºF below normal. France is a deep freeze.

Later in the evening

I had my first dinner in tonight. It’s good to be able to eat at home and not have to pay a $3.00 to $5.00 bill at the end of the meal. You know, Coke is cheaper here than at home. I can buy a liter for 25 cents. Wine costs about 35 cents a liter. And a loaf of good French bread costs 20 cents. Meat is expensive. Inflation here is worse than in the U.S., according to Time magazine. 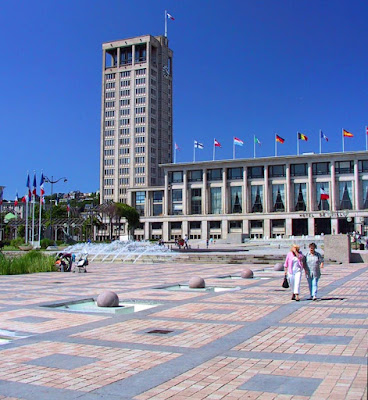 City Hall in Le Havre, built after World War II
June 2003
It’s really nice having the kitchen stove hooked up. I’ve been busy heating water for various uses — face-washing, dish-washing, shaving, etc. — all day. I thought I had got used to washing up in cold water after more than two weeks doing it that way at the temporary room I had in the school, but I hadn’t! Being able to heat a pot of water on the stove is pure luxury. 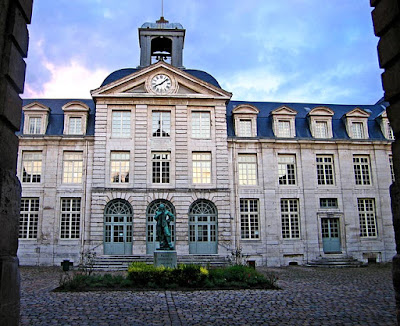 The main courtyard at the Lycée Corneille in Rouen
August 2006
You should see this apartment. The ceilings must be 15 feet high. The way the house is built, I have nobody living directly above, below, or on either side of me. Right under me on the first floor is a garage/work-shed area. My windows look out on a gravel courtyard/driveway and onto other houses. I’m away from the street, so there is no noise from outside. (Right outside my window in Urbana there was a busy intersection.) Here there’s a school, so I get a lot of noise at noon and at 4:00, but it only lasts about 10 minutes, and it’s not the same as traffic noise....

I have of course edited a lot of personal things out of the old letter, parts that talked about family matters and events in the U.S. 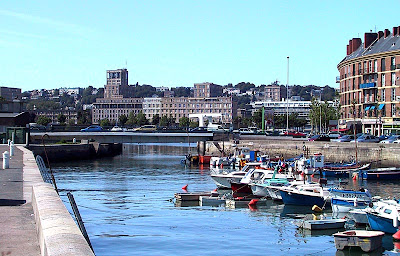 Fishing boats at Le Havre
June 2003
And I never made it to Le Havre until Walt and I went there in 2003, more than 30 years later. Even then, some French friends in Rouen couldn't believe I wanted to see Le Havre. "It's all new — you won't find the beautiful old stones there that you have in Rouen. But since you're American, you might like it," they said. 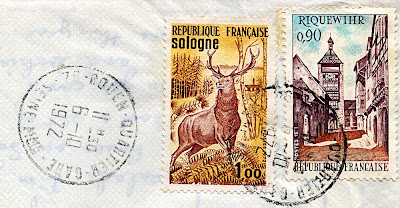 A close-up of the stamps on the letter. It's ironic that one of
them bears an image of the Sologne, which is where I live now.

That year in Rouen was crucial in my French life. I've never stopped going back there. After that year, I lived for about five years in Paris, and it's an easy trip by train. Rouen is one of the most beautiful cities in France, even though it has some of the worst weather.