Over the past few months, I've read this little piece of advice several times on different web sites and blogs: after you've done your business, lower the toilet seat before you flush. If you don't, the fine spray of water the the flush sends up and out can contaminate toothbrushes as far as ten feet away.

My first question is: Don't people rinse their toothbrushes in a stream of running water before they put toothpaste on them and stick them in their mouths? I know I do. And I prefer hot water, but some people don't, evidently.

Here at our house in Saint-Aignan, we don't have to worry about toilet spray contaminating our toothbrushes. Our toilet is in a separate room from our, and I use this alternate term advisedly, "bathing room." That's how most (but not all) French dwellings are set up.

In many ways, it's very practical. We have, in effect, what is called "a half-bath" in America, plus another bathroom, which is not really a full bathroom because there's no toilet in it. In fact, we don't have a term to describe such a room in current American English. I suggest "bathing-room."

In San Francisco, we had one full bath (with bathtub, sink, and toilet) and one three-quarters bath (with shower stall, sink, and toilet, but no bathtub) in our house. The bathing-room in our Saint-Aignan house doesn't qualify as a full bath or a three-quarters. The fixtures in it are a shower stall, a bathtub, and a sink. Oh, and a bidet. It really is a room for bathing.

Something about having the toilet in a separate room, the WC, is peculiarly European, I think (even though the half-bath is not uncommon in America). Sometimes the French WC is a room with just a toilet, and sometimes it includes a toilet and a sink, or lave-mains (a "hand-wash") — what somebody I know once described as a "boat sink" because of its diminutive size. 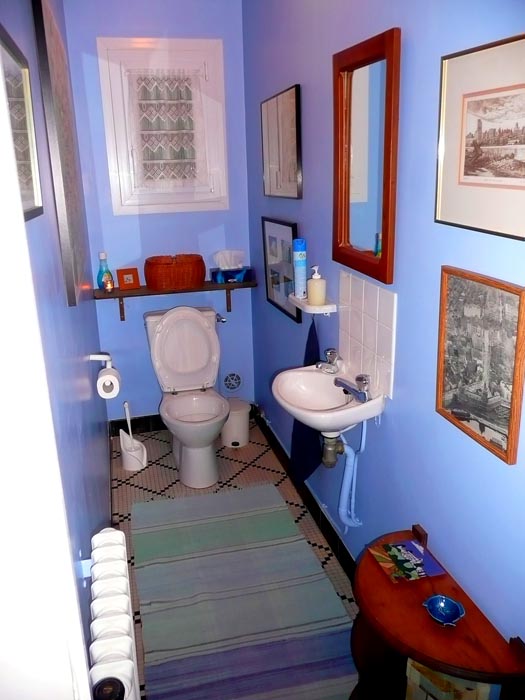 For French people this room has a name, but they
pretend it doesn't exist. We Americans admit that
it exists but we don't really have an everyday name for it.

Having a separate room where you go to use the toilet means it is clear what you plan to do when you go in there. That might go against some of our more Victorian American conventions. It's not hypocritical enough. When you "go to the bathroom" in American English, in one sense it is clear that you intend to urinate (or worse!) but you don't have to actually 'fess up. Maybe you in fact just intend to freshen up, or wash your hands, or check to see if you have any lettuce stuck in your teeth. To powder your nose, as it were.

"Yes, I'm going to brush my teeth." Oh, that bathroom. 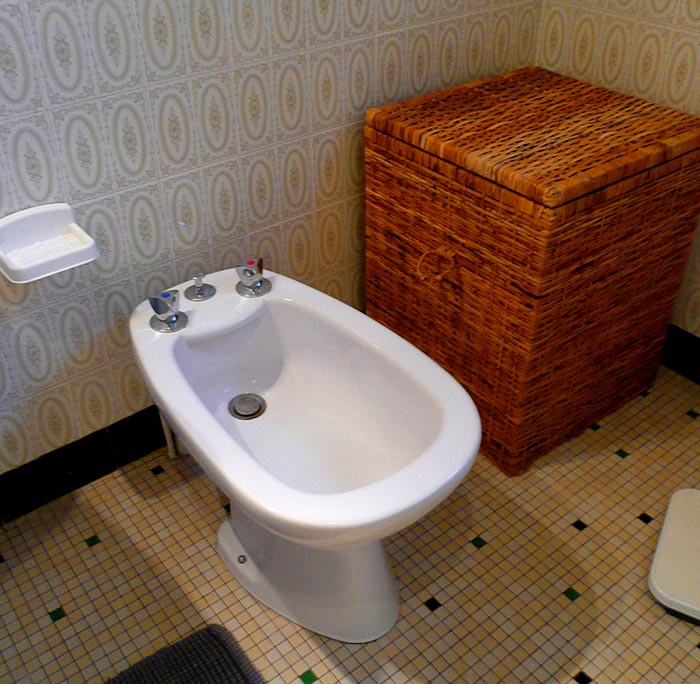 How many of our American visitors have gone into our bathroom
only to find themselves unable to locate the fixture they
were looking for? Don't use this one. It's a bidet.

I don't know what to call the water-closet in American English. "The toilet" sounds too direct, almost harsh, too functional. "The half-bath" sounds like the description in a real-estate brochure. "The loo" sounds too twee. "The throne room" is the best I've come up with. We are in château country, after all.

We could just pretend it doesn't exist. I think French people do that in polite society. For example, they always close the door, even when the room is unoccupied. Years ago, I used to be invited regularly to Sunday dinners at the apartment of a French woman in Paris. After apéritifs, wine, and coffee, I invariably had to go to "the bathroom." When I had flushed the toilet and left the room, I left the door open just a crack. It's an old habit; seeing the door slightly ajar lets the next person know that the room is not occupied.

The hostess would listen carefully to determine whether I had closed that door all the way. After a minute or two, she would quietly get up from her chair, in the middle of whatever conversation we all were having or whatever TV program we were watching, and go close it. She couldn't stand it. You could here it click closed when she walked back there. She didn't use the room; she just shut the door. And I would always think, damn, I again forgot to close the door all the way. It had to be tightly closed, always. Who know what horrible germs or smells might have escaped into the house otherwise. 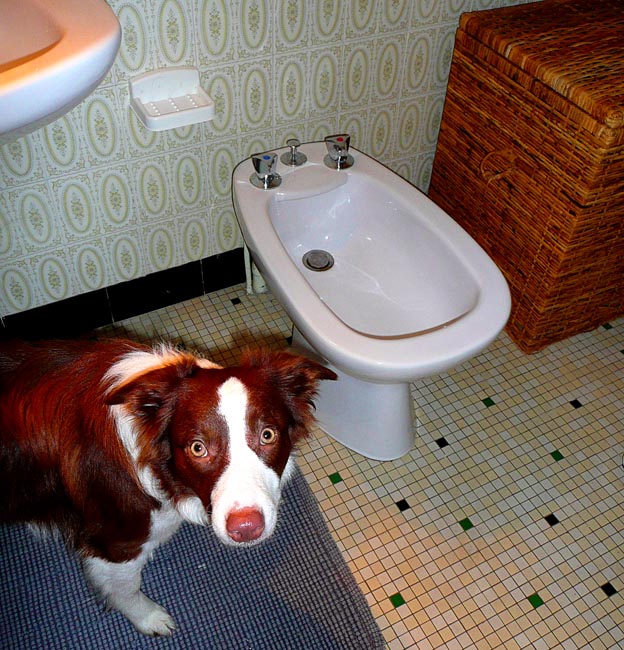 When I went to take a picture of the bidet, Callie came to see what
I was up to. She doesn't really understand what a bidet is for either.

The other thing that makes me believe that French people would like to pretend the WC doesn't exist is that in calculating the square footage (well, meterage) of your apartment or house, you are not allowed to include the throne room. I think you can include the salle de bains, however, and the kitchen. The WC has its own special status. It is invisible; technically, it doesn't exist. It's not part of the surface habitable, the living space.

Some also say it is just not proper to ask to use the bathroom (let's be clear — d'aller aux toilettes) at someone else's house when you are, say, invited to dinner. You just have to hold it. On prend ses dispositions to avoid such awkward situations. I've heard other French people poo-poo the whole bathroom interdiction thing, however.

An Englishwoman we know said an Englishman we also know might have a hard time selling his house in France to French buyers because in remodeling it he put the toilet in the same room with the shower, tub, and sink. French people wouldn't like that. It would seem strange. It's not what they are used to. It's more English-style.

In fact, more and more often you see that configuration in French dwellings. All the way back in the 1970s, one suburban Paris apartment I lived in had that bathroom configuration. The fixtures had obviously been installed as a kind of afterthought, in a very small (should I say wee?) space. A closet. Whatever. It worked for me.

And all along I thought the English went to the loo, which is the anglicized pronounciation of les lieux, meaning that unnamed place where the facilities are located. The toilet — that's the polite British term, I've been led to believe. No restrooms over there.
Posted by Ken Broadhurst at 19:53