After nine or ten hours on the road, we arrived in Salton City. We were leaving San Francisco and California to relocate ourselves to France, with a stopover of unknowable length in North Carolina, where we would wait for our visas to be granted by the French government. Salton City, on the shores of the salty Salton Sea, is where CHM had a house in the 1990s and into the 2000s. We used to do the drive from San Francisco to Salton City every year in April or October — it's too hot in the southern California desert to go there in summer — to spend time with CHM and see the sights.


In this short slideshow I've put eight photos I took on April 29 and 30, 2003. I didn't take a lot of photos, for some reason. The first two show what the weather was like — very windy. You can see the way the fan palms were being almost bent over by strong wind.


The second two photos show our dog Collette. We had driven north from Salton City with CHM to a town called Thermal, California, one of the hottest places on Earth, and located in a spot that is 42 meters (138 feet) below sea level. The average high temperature there in summer is about 40ºC (over 100ºF), but the other seasons are pleasant. We went to Thermal to enjoy an ice cream concoction called a "date shake" — a milkshake flavored with dates grown in palm groves in the area. The next town south is of Thermal is Mecca, California. The café/shop where we had shakes is called Oasis Date Gardens. Walt used to order trays of dates from Oasis and have them shipped to his grandmother every year at Christmas. 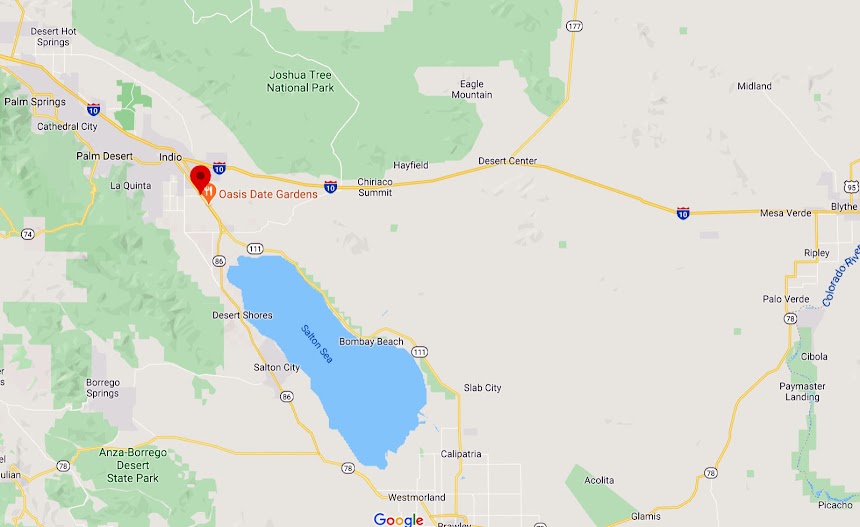 Thanks to Google Maps


Anyway, the Oasis café had picnic tables out in the palm grove where you could sit and enjoy your date shake or other treats from the café. Collette the collie  was with us. She found something putrid-smelling to roll in, and we had to drive back to Salton City with the smelly mutt in the car. Then at CHM's house Walt gave her a bath in the back yard using the garden house and Lemon Joy dish-washing liquid. We were planning to hit the road again the next day for another nine or ten hour drive. We couldn't have the dog in the car smelling like that. You'd have thought that at age 11, Collette would have learned not to roll in dung, but I guess it was just irresistible.

I almost forgot to mention the plants in the slide show. They were ones I took to give to CHM. One is an "elephant bush" or Portulacaria afra. CHM had given it to me years earlier, and I was giving it back to him because I couldn't take it to France. Years later, he brought me cuttings from it to France, and I still have it growing.


The next day we headed out. We drove east to Blythe, California, and then on to Phoenix then north to Flagstaff, both in Arizona. The mountain in my photos is either Agassiz Peak or Humphreys Peak — I don't know which — north of Flagstaff. Both peaks rise to well over 12,000 feet (3800 meters) in elevation, and are the remains of ancient volcano which is now extinct.


The last two photo show some of the sites (billboards and rocks) between Flagstaff and our next destination, Gallup, New Mexico.
Posted by Ken Broadhurst at 06:45